Skip to content
An accusation of witchcraft did not mean an automatic trip to the gallows, even at the height of the witch trials in the 16thand 17thcenturies. Under the Witchcraft Act of 1563, causing death through any “witchcraft enchantment charm or sorcery” brought with it the penalty of death, but for the lesser offences of wasting or laming a person or wasting their goods, those convicted were to be imprisoned for one year and to stand in the pillory once a quarter for six hours. Death was the penalty for a second offence of this kind.
Elizabeth Francis of Hatfeld Peverel in Essex, however, was convicted before the courts three times on accusations of witchcraft before finally meeting her fate. 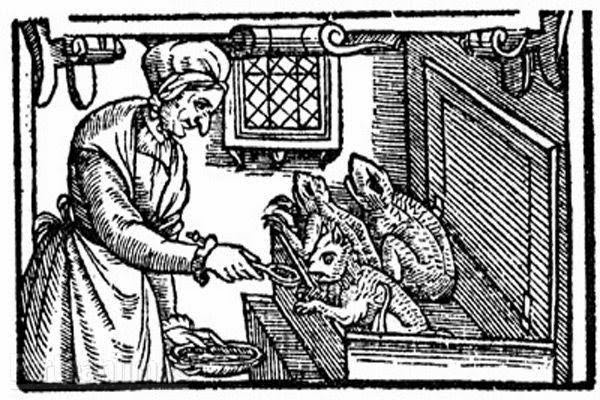 Elizabeth first enters the record in 1566 when the following indictment was recorded in the July assizes at Chelmsford:
Fraunces, Elizabeth, wife of Christopher Fraunces of Hatfield Peverel, indicted for witchcraft. On 8 Feb. 1566 she bewitched John the infant son of William Auger of Hatfield Peverel so that he became paralysed. Confessed; imprisoned for a year.
In addition to the charge for which she was imprisoned, Elizabeth stated that she had entered the world of witchcraft when she was just twelve years old, under the tutelage of her grandmother, Mother Eve of Hatfeld Peverel. The old woman gifted her a cat – the same creature, incidentally, that Elizabeth eventually passed on to her sister Agnes Waterhouse, who became the first to be hanged for witchcraft in England after the same assizes in 1566. The cat, named Sathan, had done Elizabeth’s bidding in return for bread and milk and a drop of blood, and she had used the animal to fulfil several desires. 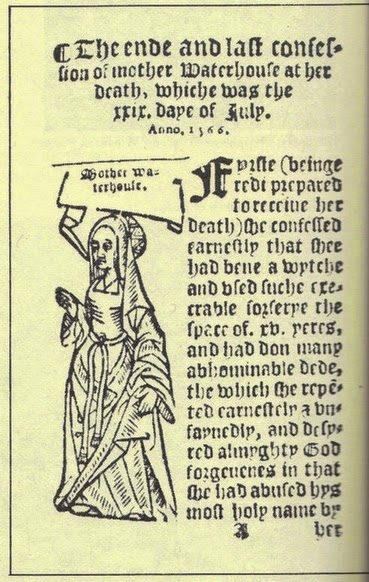 Confession of Agnes Waterhouse,
sister to Elizabeth Francis
Elizabeth had first asked for wealth and goods in the form of sheep. These were duly granted, and she received eighteen in total. The creatures soon left (whether through magical means or meeting more earthly fates is uncertain) and Elizabeth turned her thoughts to matrimony. She fixed her attentions on Andrew Byles, a man of wealth in the area. Sathan was happy to grant this request, on the condition that Elizabeth allow him to abuse her beforehand. She gave herself to Byles, only for the man to refuse to marry her afterwards. Wanting revenge, Elizabeth instructed the cat to deprive her erstwhile lover of his goods; finding this not enough to satisfy her however, she went further, asking him to him to touch Byles’ body, causing him to die. Suspecting she was pregnant, she turned to Sathan again for advice, taking the herbs he recommended to abort the pregnancy.
Not put off by the first experience, Elizabeth then asked for another husband – Sathan promised her Christopher Francis. She duly gave herself to him and he honoured the agreement by marrying her, and a child was born a short while afterwards. The marriage was not the calm, happy match she had hoped for, and there was much swearing and cursing from both sides. When their child was six months old, in an attempt to rectify the situation, she willed Sathan to kill it. This was carried out, but still matters did not improve between husband and wife. Elizabeth therefore told the cat to lame her spouse – the cat showed itself in the form of a toad in the man’s shoe, and when he touched it with his foot he was lamed and it could not be healed. 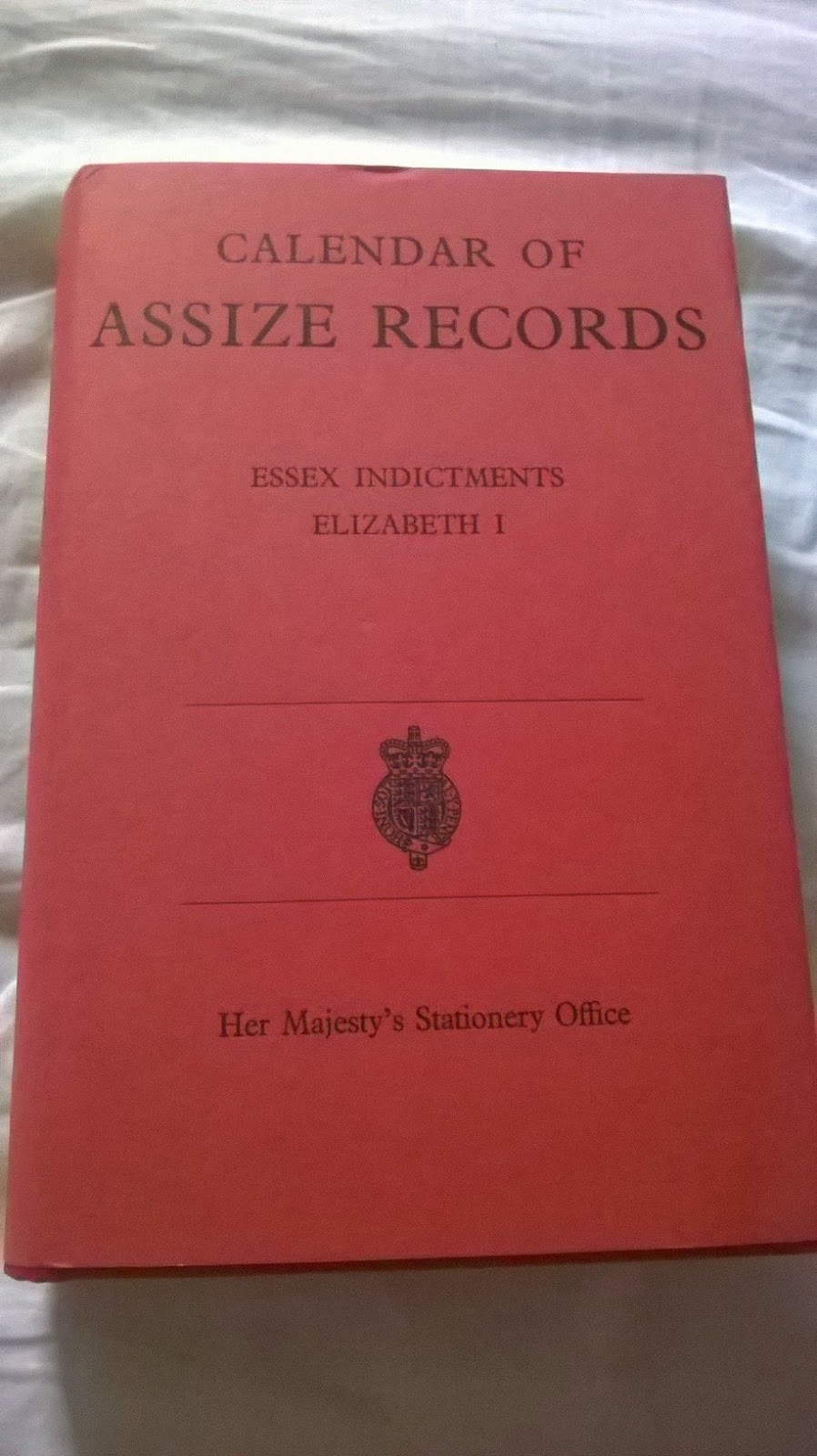 What occurred in the intervening years is unknown, but in 1572 Elizabeth was again before the courts:
Francys, Elizabeth, wife of Christopher Francys of Hatfield Peverel, indicted for witchcraft. On [?] Mar. 1572 at Hatfield Peverel, having been previously convicted of a similar offence, she bewitched Mary wife of William Cocks, miller, so that for ten days afterwards she was lame and infirm and despaired of her life.
In a footnote is added:
Let a new indictment be drawn, in which the recital will be clearer than in this.
Whatever the cause for concern, when the redrafted indictment came to court in March 1573 it read:
Frances, Elizabeth, wife of Christopher Frances of Hatfield Peverel, yeoman, indicted for witchcraft. On 25 Mar. 1572 at Hatfeld Peverel she bewitched Mary wife of Nicholas Cocke of Hatfield Peverel, miller, so that she languished for ten days.
Guilty; to be pilloried and imprisoned for one year.
Despite it being a second offence, Elizabeth was treated as if it were her first, though whether due to the confusion over rewording or perhaps for giving evidence in the case against Agnes Francis who was also indicted at the same assizes for causing death through witchcraft is unclear. Escaping the death penalty, she served her sentence, returning to Hatfeld Peverel. 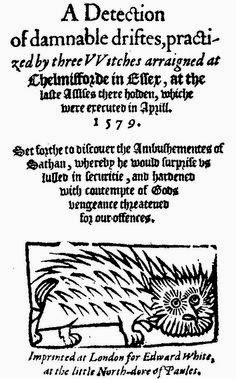 The next and final mention of Elizabeth Francis comes in April, 1579:
Fraunces, Elizabeth, of Hatfield Peverel, spinster, indicted for murder by witchcraft. At Chelmsford sessions, 8 Jan. 1579. Presented that on 26 June 1578 at Hatfeld Peverel, Fraunces bewitched Alice Poole, spinster, wife of Richard Poole of Hatfield Peverel, so that she died on 1 Nov. 1578.
Guilty; to hang.
In the pamphlet A Detection of Damnable Drifts, it is related that Elizabeth asked for some old yeast from Alice Poole, the wife of a neighbour. Upset when the woman refused her request, Elizabeth cursed her and “bade a mischief to come upon her.” Amidst a great noise a spirit appeared, in the shape of a small shaggy white dog. After telling the dog her problems she willed it to go and plague Alice Poole both in mind and body, which the dog promised to do. She did not hear from the spirit again, but learnt from neighbours that the other woman had been “grievously pained” in the head and was still in the same condition at the time of Elizabeth’s arrest.
Fate did not intervene this time, and Elizabeth would have met her end on the gallows at Chelmsford.