Skip to content
The imprisonment and eventual execution of the “Belvoir Witches” takes up only a small paragraph in the guidebook to Lincoln Castle, where they spent their last days in 1619. Their sorry fate however was not only the closing chapter to one of England’s most infamous witchcraft cases, it also saw the end to the dynastic hopes of Francis Manners, Earl of Rutland, a man of great prominence favoured by James I.
The connection between the Earls of Rutland at Belvoir Castle and the Flower family of nearby Bottesford was not a new one; there are mentions of the family in the Rutland papers from the first half of the sixteenth century. Although once in good fortune, Joan Flower and her daughters Margaret and Philippa had since fallen on hard times, and to help relieve their situation the family were given work at the castle. Margaret especially was accorded particular favour, being given a live-in position where she had work in both the washhouse and with the poultry outside. 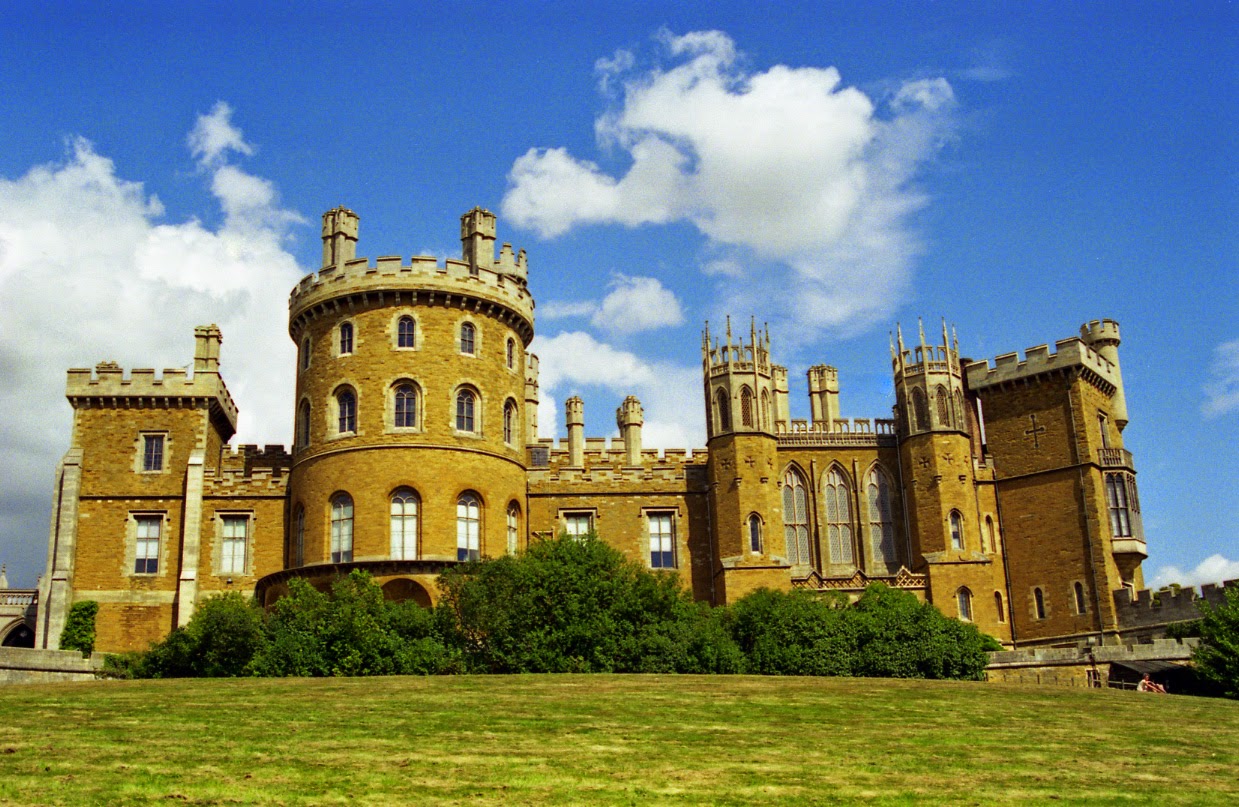 Belvoir Castle, as it is today.
Although well in favour with the Sixth Earl and his wife, the Flower women were not popular with the other servants, and at some point words were spoken to the Countess that meant Margaret was let go from her service. What was said is unclear, but the young woman was not sent away empty handed – indeed she was given a feather bolster, a wool mattress, and the not inconsiderable sum of forty shillings. Joan Flower, however, took the slight to her daughter badly, a fact made worse when the Earl, a supporter of the Flower women before this point, also began to distance himself. His refusal to take the part of Joan Flower in an argument was the final straw, and Joan declared her intention for revenge.
Whether coincidental or not, the Manners family began to suffer from bouts of unexplained sickness, with both the Earl and the Countess taken ill. More alarmingly, their eldest son and heir, Henry, Lord Roos, became unwell, suffering from convulsions and fits that caused great concern. Despite hopes for his recovery the boy’s condition deteriorated, and, despite all attempts to help him he died in 1613, much to the grief of the Earl and Countess. Their hopes for the continuation of the family line were now fixed on their second and only remaining son, Francis, who inherited his brother’s title of Lord Roos. Fears heightened as Francis was also showing signs of the same illness as Henry, and by some accounts Katherine, the Earl’s daughter from his first marriage, was also unwell. 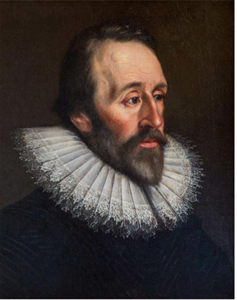 Francis Manners, 6th Earl of Rutland
With close connections between castle and village and with the protection of the Earl and Countess removed, it was not long before the many enemies of the Flower women grasped the opportunity to strike against them. There were several accusations made against Joan and her daughters; along with rumours that they were to blame for the death of the Earl’s son, it was revealed that Margaret was well known to take items from the castle home to the cottage where her mother and sister lived, which may have been the reason she was dismissed from service. There were also rumours of visitors to the cottage at strange hours, with talk of dissolute company and strange goings on taking place behind closed doors. Philippa Flower’s infatuation with a man named Simpson was well known, as was his assertion that she had bewitched him into returning her feelings, so that he was powerless to resist her.
It was only a matter of time, and Joan and her daughters were apprehended shortly before Christmas, 1618. Enough evidence was gathered against them, and  they set out on the journey to Lincoln where they would be tried at the next assizes.
Three women set out, but only two were to complete the journey; in a strange twist that further heightened the talk of witchcraft, Joan Flower never arrived in Lincoln. On the journey she made a demand for bread and butter, seeking to use the old saxon trial by ordeal known as corsned to prove her innocence. This required the accused to swallow the bread (which was often consecrated); if they were successful, then they were innocent, but if they were unable to swallow it was proof positive of guilt. Joan failed the test; it was reported that the old woman choked on the food and was buried at Ancaster, leaving her daughters to travel on to their fates alone. 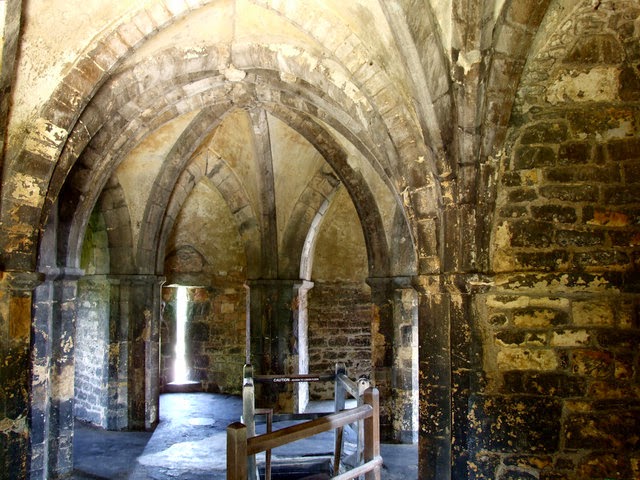 Dungeon at Lincoln Castle where the Flower sisters were held.
The girls were convicted by the testimony of those who came forward to speak against them, and also by their own admissions. Having accepted the offer of the Devil to be of use to them in their endeavours, the women of the Flower family had received instruction in a variety of charms, curses and spells that could be used to carry out their plans of revenge. Despite keeping a pretence of friendliness towards the Earl and his wife, they had worked actively to harm his family.
Joan and her daughters had appropriated one of Henry Manners’ gloves; this was rubbed against the back of Joan’s spirit, Rutterkin, and placed in boiling water. When the glove was removed it was pricked several times before being buried in the yard, along with the wish that the young lord would waste away as the glove rotted in the ground, using a form of sympathetic magic that would be well known and feared by those who heard the tale.
Philippa confessed that she had heard her mother and sister cursing the Earl and Countess, and that they had boiled blood and feathers together whilst saying spells and incantations. Margaret confessed to having two familiar spirits, and Philippa that she had let one suckle from her in return for obtaining the love of Thomas Simpson. Margaret also claimed that she was visited by devils in her prison cell, but became angry with them because she could not understand what they were saying to her.

Front page of the pamphlet detailing the Belvoir case,
published not long after the events.
Margaret and Philippa were found guilty under the Witchcraft Act of 1604, by which causing death by witchcraft and communing with spirits were offences punishable by death. The sisters, apparently remaining unrepentant to the end, were hanged at Lincoln on 11th March 1619 after being tried at the assizes.
Their death was not enough to break the misfortune of the Earl, however, and further tragedy was to strike the Manners’ family. In 1620 the earl’s new heir and only remaining son, Francis, also died. Francis Manners remained convinced that witchcraft had been behind the death of his sons to the end of his days, and on his death in 1632 his tomb bore the inscription:
“In 1608 he married ye lady Cecila Hungerford, daughter to ye Honorable Knight Sir John Tufton, by whom he had two sons, both of which died in their infancy by wicked practises and sorcerye” 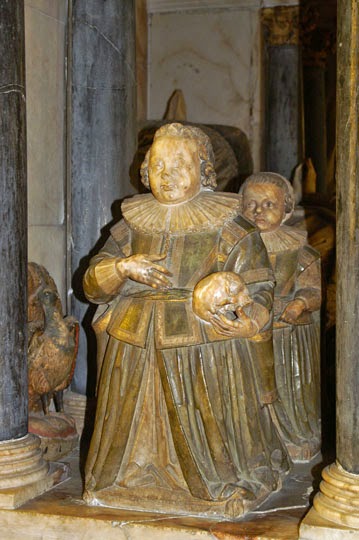 Statues of the bewitched Manners boys
from Bottesford Church
With no male heir remaining, the Earl was succeeded by his brother, George, who became the seventh earl upon his death. But were the Flower women really responsible for bringing Francis Manners’ dynastic hopes to an end? In her book “Witches”, Tracy Borman argues that Joan and her daughters actually fell foul of a sinister conspiracy headed by George Villiers, the Duke of Buckingham. With his eye on marrying Katherine, the earl’s only surviving child, it was rumoured that Villiers, favourite of James I, had the boys poisoned in order to remove them from the picture.
Whatever his role, Buckingham got his wish; after a great deal of negotiation and scandal he and Katherine were married in 1620, and remained together until the Duke’s murder in 1628. The death of her brothers and the fate of the women held responsible passed into popular legend, a chilling reminder of what happened to those who took part in ‘wicked practises and sorcerye’. 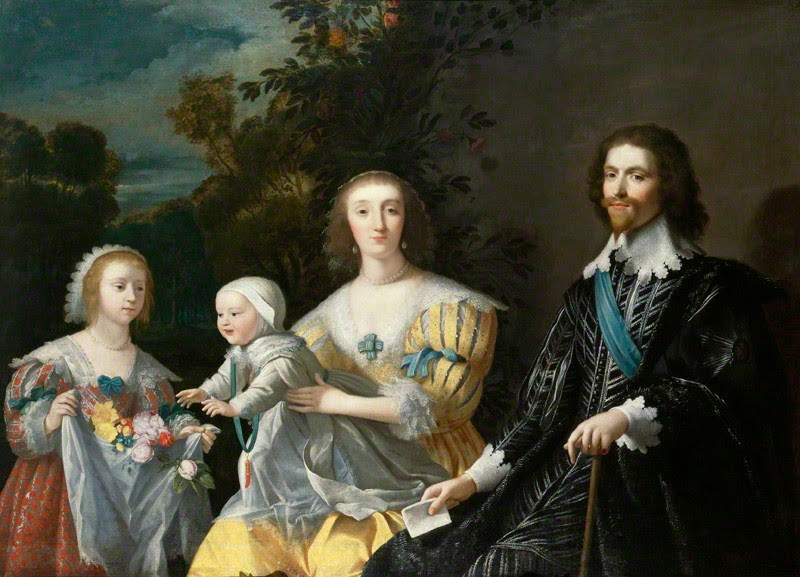 The Duke and Duchess of Buckingham and their family.