Skip to content
I came across the following painting in a recently purchased book, mislabelled as “The Witch.” True, the woman does conform to several witch-related stereotypes; she is old, carrying a broom and dealing with demons. It  turns out, however, that “Dulle Griet” or “Mad Meg” is very likely not a witch at all. 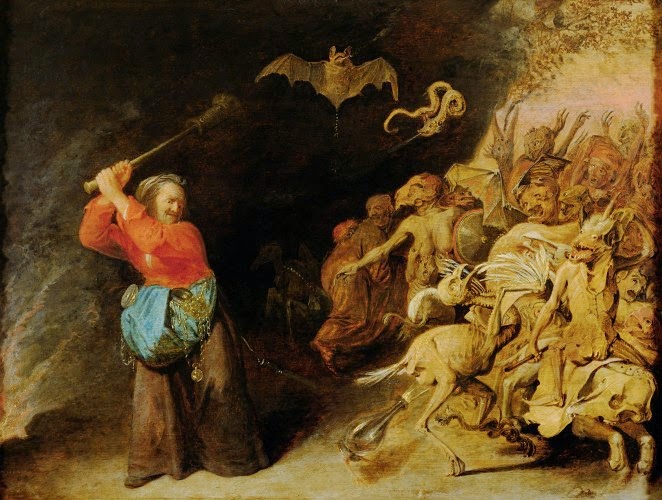 Dulle Griet, David Ryckaert III c.1650
So who was Dulle Griet? A familiar figure from Flemish folklore, she is best known as the peasant who led an army of women into hell. It is possible that she shares a connection with “Gret Sauermal”, a woman who quarrelled with her husband and had the ability to enter hell and come back unharmed, due to her unpleasant and un-ladylike behaviour.
In Ryckaert’s depiction, Meg is shown beating back the creatures of hell with her broom. Her apron is overflowing with treasures that she has presumably just liberated from the underworld, a fact that is variously seen as a triumph for Meg or as overwhelming greed on the old woman’s part, battling for more gold when she already has more than she can carry.
Pieter Bruegel the Elder also captured Meg in his 1562 painting. She can be seen advancing towards the entrance of hell, while her female followers pillage a nearby house. 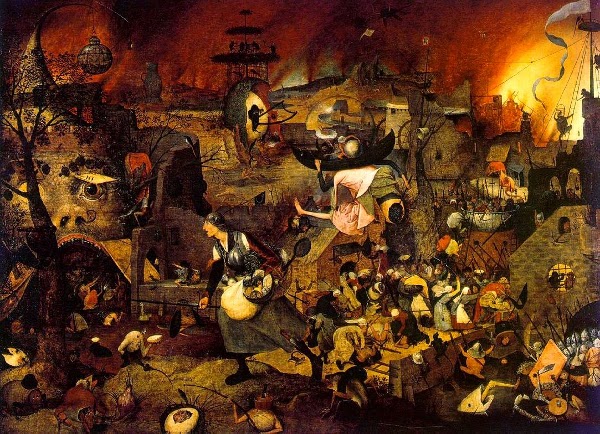 Dulle Griet – Pieter Bruegel
As with the first image, Dulle Griet is often labelled as a witch, and indeed Bruegel may have been passing comment on the witch hunts that were taking place across Europe. The ability to enter hell is certainly otherworldly, and demons are strongly linked to witches and witchcraft, and the painter may well have been making his views known on a central topic of the time. One suggestion runs that Bruegel was mocking the culture of magic and belief that the elite in Flemish society were desperate to drum out of the lower orders.
There are, however, other fascinating interpretations regarding Meg’s identity. It turns out that “Meg” was in fact a term used to refer to a woman who possessed the undesirable qualities of being quarrelsome or shrewish, and it has also been argued that Bruegel was observing on the perceived behaviour of women in the 16th century. It has been noted that during this time there were several powerful female monarchs on the thrones of Europe, adding to a general unease caused by the religious and societal upheavals of the period. Women were not, it has been argued, staying in their places, and Meg personified this concern.
There are also links to several Flemish sayings that support this theory. The idea of a woman tying the devil to a cushion is pictured literally by Bruegel, and refers to a woman being either brave or domineering, or, in some cases, a combination of the two. The breast plate worn by Meg herself is also significant, as to “get into armour” meant to be angry or full of rage. These are typically masculine attributes, and it is arguable that Meg and her fellow women are usurping the role traditionally occupied by men. 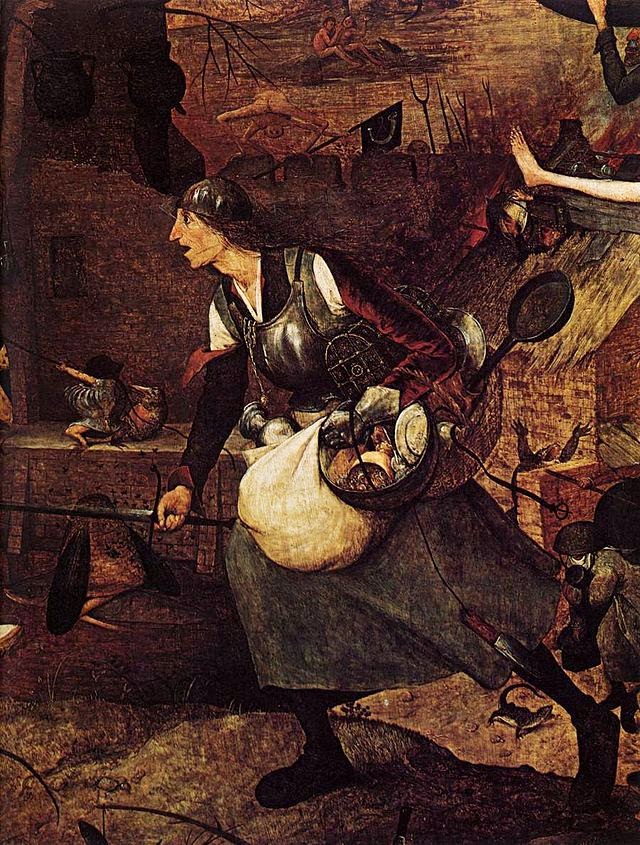 Detail of Dulle Griet
A more positive interpretation has been suggested more recently by Miranda Nesler. Nesler argues that Meg and her companions are actually on a mission to retrieve what has been stolen or squandered unwisely by mankind. Instead of “looting”, in this more favourable interpretation, the women are engaged in slaying the demons that have kept the treasures locked away. Another modern interpretation suggests that Meg might be suffering from schizophrenia, citing her fixed expression and isolated, fearful dishevelled appearance.
David Teniers the Younger was also drawn to the image of Dulle Griet. Here, Meg is shown wielding a kitchen knife, the significance of this highlighted by Liz Lochhead who has pointed out that the knife is the most common weapon used when a woman kills a man in a domestic setting. It could thus be seen as representing a woman being driven to drastic ends, unable to stand the life imposed upon her by a masculine-dominated society.
. 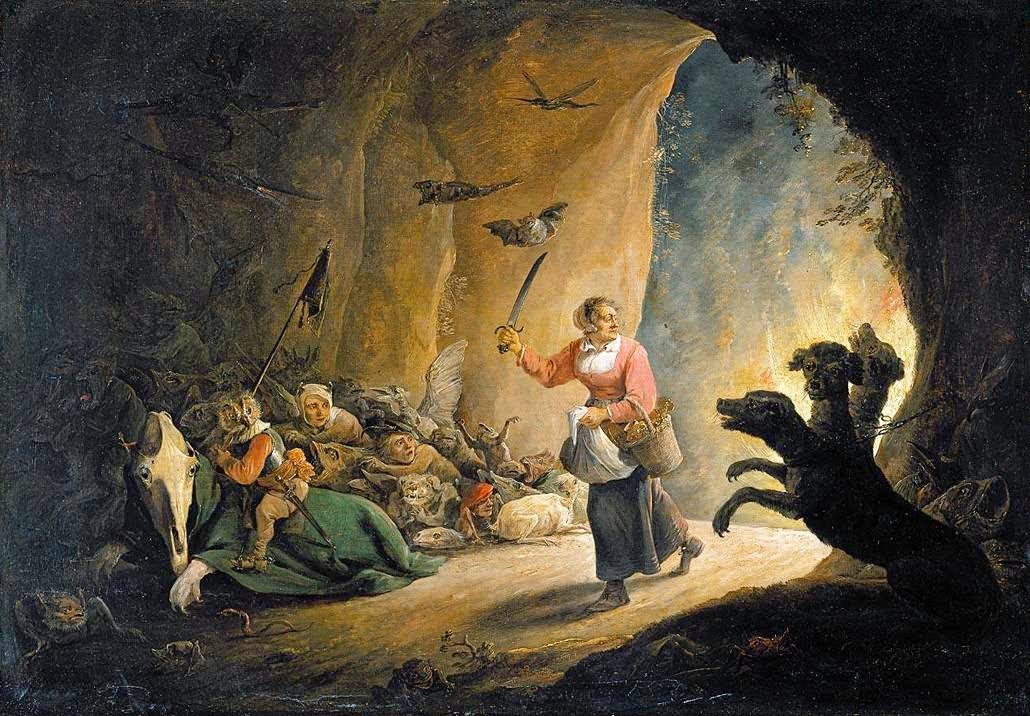 Dulle Griet, David Teniers the Younger, c. 1645
The name “Meg” is also fascinating in itself. Meg or Margaret is a name shared by enough characters in both history and legend with the same negative connotations for it to be entirely coincidence.  Margot la Folle, or “The Mad” is Dulle Griet’s French counterpart, and the Danish Queen, Black Margaret, was rumoured to owe her military victories to the Devil himself. The German Countess Rantzau, another Margaret, was so feared that she was locked into her coffin to keep her from returning after death. Large guns have also been given the name in Scotland, Ireland and Ghent.
The ambiguity as to whether Meg has been successful or not in her mission to hell, and whether she is a woman liberated or condemned, continues in the work of Judith Schaechter. In this depiction, Meg stands on top of a plinth or pedestal that is made up of strange creatures and flowers. As in the earlier artworks, it is unclear whether Meg is returning victorious or, in a more sinister interpretation, being taken over by madness.

Finally, there is the Ghent bar that takes its name from Mad Meg. The story claims that “Meg” was in fact the name given to Johanna, daughter to Holy Roman Emperor Charles V, when she was hidden with a bourgeois family in Ghent after it became clear that she had inherited her grandmother’s tendencies towards insanity. Although it makes for a good story, I’ve found absolutely nothing to support this claim, and much against it, but am always willing to be proved wrong! 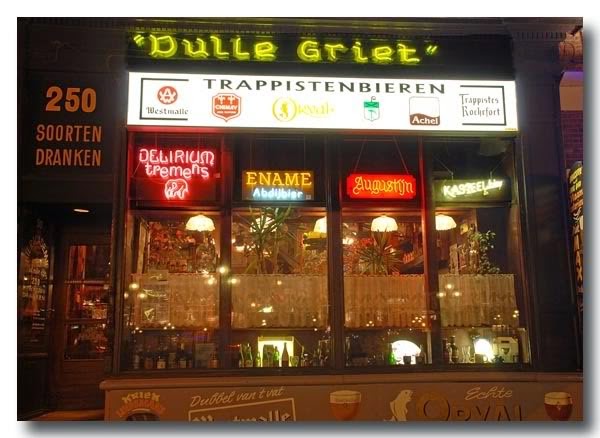