Skip to content
Joan Peterson of Shadwell, Middlesex, inhabited a hazy area occupied by many in the 17th century. On the one hand, she was a cunning woman or “white” witch, her charms and powers used to help those who were ill or to recover missing or stolen goods. On the other, she was capable of causing the very suffering she was called upon to relieve, a vengeful and dangerous woman to those who crossed her.
In Joan’s case, this blurring of roles would prove to be fatal, and in 1652 she found herself in court on two indictments. The first that:
“She had conspired with another Gentlewoman to administer a potion or posset, to the Lady Powell (living at Chelsea) who soon after the drinking thereof died.”
The second involved a Christopher Wilson with whom she had quarrelled. Calling upon Joan in desperation when taken ill, Wilson had agreed to pay her fee but, once cured, went back on the deal. Joan had been blunt when telling the man just what she thought of him, vowing vengeance if he did not pay her what he had said. Sure enough, Wilson received his comeuppance:
“…and very suddenly after he fell into very strange fits, and for twelve hours together would rage and rave like a mad man, and afterwards for twelve hours more would flabber out his tongue; and walk up and down like a meer changeling.” 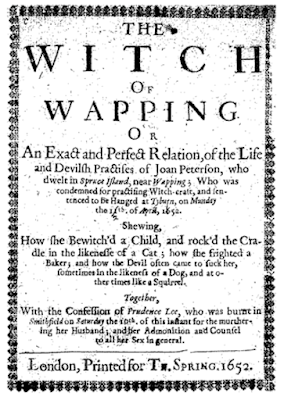 Whether she had indeed spoken the words against Christopher Wilson could be contested, but it appears that, in the matter of Lady Powell’s death, Joan was innocent. The lady in question had been in possession of a great fortune when she died, and there was a bitter battle taking place between her niece, Anne Levingstone, and one Thomas Crompton.
Crompton had  inveigled his way into Lady Powell’s affections, splitting her from her husband before hiding the older woman away in Chelsea. In so doing, Crompton had gained control over Lady Powell’s estates and finances, and was set to inherit a great deal when she died. Things did not go as planned, however, and through the machinations of concerned family members, Lady Powell was reconciled with her husband before his death, and went on to leave her money and estates to Anne Levingstone instead.
Already in possession of a great deal of her wealth however, Crompton was not to give up without a fight. In January 1562, Joan Peterson was approached   and offered one hundred pounds to say that she had provided Anne Levingstone with “certain powders, and bags of seeds, to help her in her law suits, and to provoke unlawful love.” The implication was that Lady Powell’s affections had been gained by unfair means, but Joan refused, leaving those who plotted in a dangerous situation.
Deciding Joan knew too much, Crompton and his “confederates” decided upon a new and deadly plan. On 7th March they went to Wapping, where they obtained a warrant from a Justice of the Peace. The substance of the warrant was the arrest of Joan, and also permitted the searching of her house. Nothing was found, but, not to be dissuaded, Joan was taken before the magistrate and examined regarding whether she had used witchcraft against Lady Powell. Joan was adamant that she had not, and that she had not even heard of this Lady Powell, though she admitted that Crompton’s woman had been to see her and asked her to swear against Anne Levingstone. 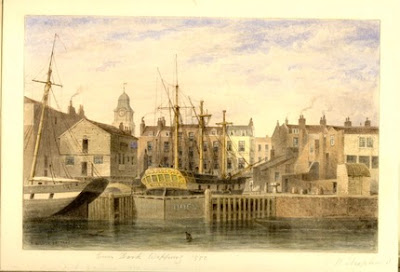 Dockside, Wapping
Joan’s body was searched for signs that would confirm her status as a witch, but nothing incriminating was discovered, and Joan was released on bail. This was not the end of the matter, as on 14th March she was taken in again for further questioning. Everything was tried to get her to confess, including the promise that they wished only to catch Anne Levingstone for her crime, and it was not Joan’s life they were after.
Joan remained steadfast in her reply, and repeated that she had never heard of Lady Powell and did not know her, and as for Anne Levingstone, she had not seen or heard from her in about a year. This then led to more searching, in a “most unnatural and barbarous manner.” This time, it was told to the Justice that there had been found “a teat of flesh in her secret parts more than other women usually had.” This was enough for Joan to be taken to New prison and then on to Newgate.
Her case was heard at the Old Bailey on 7th April, taking up the majority of the day. Evidence was heard from many against Joan, whilst those who might have spoken in her favour were forcibly dissuaded from entering the building to give their testimony in her defence.
Some of the evidence given against Joan survives on record. When a neighbour’s child fell sick, it was thought Joan was to blame.  There was such fear for it’s life that the child was watched both day and night, and while neighbours were watching so the exhausted parents could rest, something strange occurred. Around midnight, a large black cat approached the cradle and began to rock it. The animal vanished when threatened with the fork for the fire, only to return again an hour later. This time, the other woman in attendance kicked the creature, only for it to disappear again, leaving the woman with a leg that was swollen and sore. 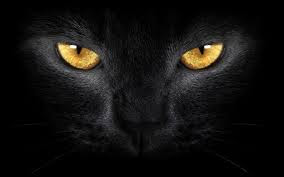 Frightened, both left soon after, and on their way home met a baker who shared a strange tale. He had just seen a great black cat which had frightened him enough to make his hair stand on end. On hearing this, the women told him what they had witnessed, and the baker said he was certain that Joan Peterson had bewitched the child.
Those closer to Joan spoke against her; her own maid testified how she had been lying with her mistress one night when Joan Joan told her that a squirrel would come to her – it would do no harm, however, and the girl was not to be afraid. As midnight approached, sure enough, a creature that looked like a squirrel joined them on the bed, the girl frozen with fright as the animal and Joan carried out a conversation that, although overheard by the maid, could not be recorded as she had been so bewitched as to not remember it afterwards. Joan’s own son who was around seven or eight, inadvertently confirmed this when, quizzed by some friends from school about his mother and her strange behaviour. The boy responded that Joan was able to do the things she did because a squirrel taught her how to do things.
Despite evidence of a rigged jury and coerced witnesses, Joan was acquitted of aiding in the death of Lady Powell, but found guilty of harming Christopher Wilson, and was sentenced to hang on Monday 12th April, 1652. 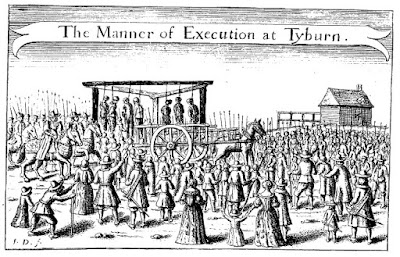 The Faithful Scout for 9th-16th April, 1562 tells the tale of Joan’s execution:
“This day was execution day for London; three suffered, two men, and one woman; the men were sentenced for horse-stealing; the woman was condemned for witchcraft, and seemed to be very much dejected, having a melancholy aspect: she seemed not to be much above 40 years of age, and was not in the least outwardly deformed, as those kind of creatures usually are Being brought to Tyburn, and the Rope put about her neck, she was urged to discharge her conscience; whereupon she replied, that they were but flesh and blood as she as, and therefore should receive no satisfaction concerning her proceedings: Her end was as miserable as her life abominable; for when the Minister exhorted her to repentance, she cried out, away with this babbling fellow.”
Joan was not the only one to cry out at her own fate; there were plenty afterwards who spoke of foul play in the matter. Anne Levingstone brought a case to court not long afterwards against Thomas Crompton and his conspirators, citing her damages at the grand sum of 20,000 pounds. The battle for Lady Powell’s estate continued for the next decade, until matters were resolved by Act of Parliament on 19th May, 1662.