Skip to content
“Journeying westward and about a half mile from Dunning, we see over the policy wall on a rising ground among the trees, a monument of a kind not to be met with at every town.”
Perthshire Advertiser for 20thSeptember 1855 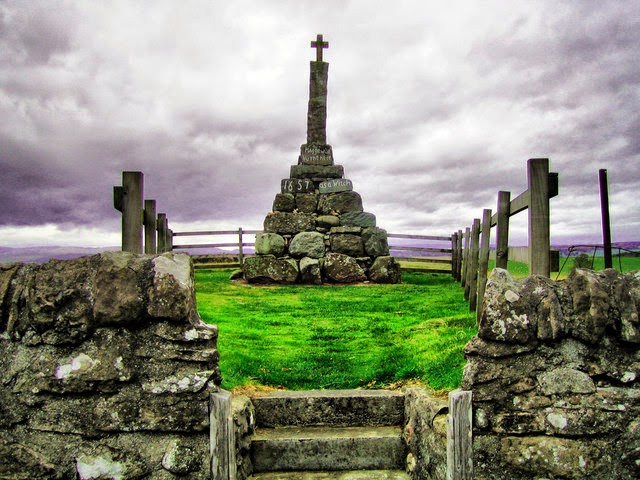 The monument in question is a fascinating sight indeed, and the source of much debate through the years. Constructed of stone and reaching twenty feet high, the structure is topped with a cross, whilst across the front for all to see is inscribed the intriguing declaration:
“Maggie Wall burnt here 1657 as a witch.”
Popular legend  has several explanations for the identity of Maggie. Some say she was a parlourmaid, accused of witchcraft due to an ill-advised tryst with the son of a local laird. There is also speculation that Maggie had an affair with the lord himself, Lord Rollo, and that the monument was erected either by himself or his wife in pity and remorse after her execution. Others believe her to have been a local healer, persecuted for her work, or one of several women who protested against the treatment of a local minister and punished for her outspokenness. The Saracen’s Head pub in Glasgow proudly displays what is purported to be the witch’s skull, though how it came to rest there is a matter for speculation in itself. 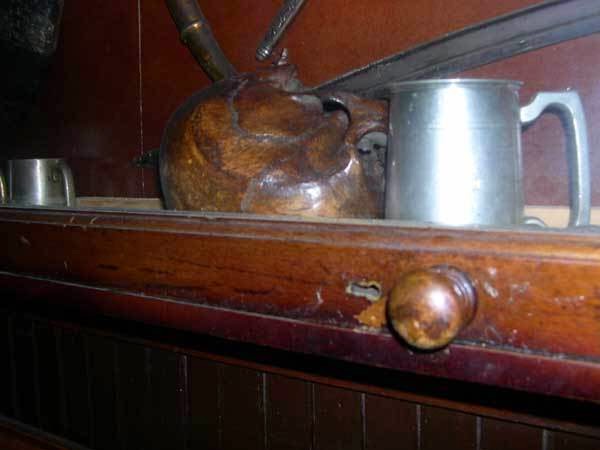 The skull of Maggie Wall
Enduring as local ideas may be, looking closer at the stories surrounding Maggie Wall reveals that matters are not as they seem. Often cited as the last witch to be burnt in Scotland, (a dubious honour that actually belongs to Janet Horne in 1722) there is actually no surviving record of a Maggie Wall, or Walls as she is sometimes known, in any of the documents relating to witchcraft accusations or trials in the period.
What then is this monument supposedly erected in her name, and did Maggie in fact ever exist at all?
The monument was clearly in evidence from at least 1855 as described in the Perthshire Advertiser, and is visible on the ordnance survey map for 1866. The wooded area that used to surround the monument had the name Maggie’s Walls in 1829, but there is no mention or evidence of the monument before the middle of the 19th century.
Perthsire historian Kenny Laing has put forward the theory that Lord Rollo ordered the monument to be erected after the witch was burnt on his land. He points out that as the local landowner he would have signed the papers sentencing her to death; one legend states that he had the monument erected when his wife was absent in order to repent of the shame he felt for sending Maggie to her fiery fate.
The Dundee Courier for 8th March 1878 references a local minister, Dr. Wilson, who was certain that the whole story of Maggie Wall and her tragic end was a complete fabrication, though for what end is not stated. The reporter however is quick to point out that he at least would argue in favour of Maggie’s name simply having been left out of the records, rather than countenance that an entire village had deluded themselves into believing the story to the point of erecting a monument to a person who never existed.

Geoff Holder believes the monument is actually an 18th century folly, and also that the name is an invention.  He points to the existence of a nearby field known as Maggie’s or Muggie’s Walls, suggesting this is the origin of the name painted on the monument.  He also maintains that the monument could not have been built earlier than the 18th century.
Holder reveals that a local schoolmaster, David Balmain, was a tenant of Maggie’s Walls – Holder speculates that he may have built the monument in memory of two family members that were accused of witchcraft but escaped being charged in 1662, or that the idea of “Maggie” may have been used as a figurehead to stand for the many accused of witchcraft during the 17th century in Scotland.
Dr. Louise Yeoman also believes that the story was nothing but myth. She points out that not only does the memorial not fit with any others from the 17thcentury, but that there were also no other memorials to witches, executed or otherwise. She and archaeologist David Connolly believe that the structure actually originated as a clearance cairn – i.e. a pile of stones that have been removed from a field  to enable greater ease when ploughing or using other tools in pasture or arable land – and was then topped with a cross from a later date. They likewise date the monument to no earlier than the late 18thcentury. 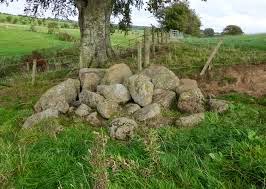 A Clearance Cairn
The question must also be asked why a monument was erected to Maggie and not one of the other women and men executed for witchcraft during the 17th century. In 1662, six Dunning witches were arrested and tried by the local gentry, that including Lord Rollo and his brother. Three of these were executed, strangled and the burned in nearby Kincladie wood. Yeoman suggests that by the 19th Century, the Rollo family, feeling somewhat shamed by the part their family played in the witch trials, may have been attempting to re-write history by putting up the monument.
The 1650s were a time on general unrest in Dunning. Riots broke out in the defence of the Reverend Muschet, and the officials arriving to hold a synod with the intention of disciplining the minister were driven off by a mob of angry women. Some have speculated that Maggie Wall may have been involved in this dramatic event and made to pay the price for her part in the disturbance. 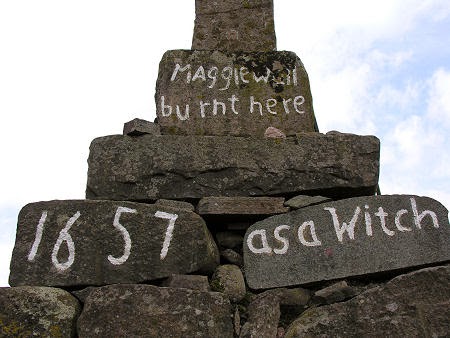 Archie McKerracher in Perthshire in History and Legend wonders if the events that led to her execution were so shameful that local officials and clergy determined to forget it, hence the lack of mention in records. This is unlikely however due to the plentiful records elsewhere. He also posts that perhaps Maggie fell victim to “unofficial” justice by her neighbours, a more plausible explanation for the absence of Maggie’s name in the documents.
Writing in 1988 he remarks that the words are given a fresh coat of paint every year and that a wreath appears on the monument, with the words “In Memory of Maggie Wall, Burnt by the Church in the Name of Christianity.”
Perhaps Maggie existed and indeed met the fate legend has ascribed to her, the Perthshire monument the only evidence left with official records long since lost.  It may also be that the legend grew up instead from the name of the local field and woodland, stories created and shared until they became established fact. It would not have taken much for someone to paint the words on one day, confirming what had already passed into local legend and serving to keep the story alive into the following generations.
Whatever the case, one thing is for certain – Maggie Wall is a prominent and enduring part of Perthshire history, inviting speculation, no doubt, for many years to come.