Skip to content
“Don’t believe everything you read,” is sound advice for the historian or casual reader alike. It was particularly appropriate when, during my recent research into Mary Lakeland, burnt at Ipswich in 1645 for the crime of murdering her husband through witchcraft, I came across a book that seemed to offer some intriguing answers to the question of why she went to the flames. 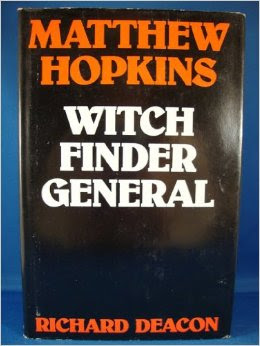 Matthew Hopkins: Witchfinder General, by Richard Deacon was published in 1976, purporting to be the first proper biography of this elusive figure. After finding it for a steal on Amazon Marketplace, I eagerly awaited its arrival, marvelling as, by chance, it opened at the exact page I needed.
As I read, I was made aware for the first time of a document known as The Tendring Witchcraft Revelations. According to Deacon, this was an unpublished manuscript, dated 1725 and authored by C. S. Perryman. It consisted of information that had been “compiled by divers informers” between 1645 and 1650, and covered a wealth of information about Hopkins and the witch hunts of Essex and Suffolk.  Throughout the book, much of which is based on the information contained in these “Revelations”, Deacon spins a tale of intrigue and espionage, magic and mystery. Hopkins is portrayed as a sinister, shadowy figure, swapping political secrets in exchange for the assistance of astrologer William Lilly and John Thurloe, a vital link to the government in London, in his witch hunt.
Most intriguing in view of my research however, Deacon states that based on the “firm evidence” from this source, it is possible to say with certainty that Hopkins visited Ipswich in connection with Mary Lakeland’s case. 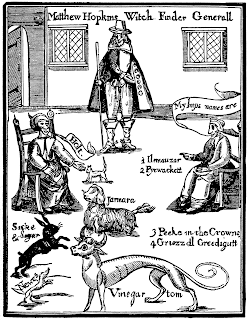 There are numerous suggestions for why Mary Lakeland was executed whilst several others accused of witchcraft at the same time were not, but the one put forward by Deacon is perhaps the most sensationalist, and according to The Tendring Revelations:
“Hopkins, who had travelled into Hollande purposefully to be instructed in astrology… went to Ipswiche especially to examine this suspected Informer of the Royalist Lady Whorwood.”
A known Royalist supporter who smuggled both gold and information to the beleaguered Charles I, Lady Jane Whorwood was wife of Brome Whorwood of Holton Park, Oxford. She was devoted to helping the King, taking part in two, unsuccessful, escape attempts, and it is believed that she was also his mistress for a time. In a stroke of Deacon’s pen, Mary Lakeland passes from poor, Ipswich widow to dangerous Royalist informer, silenced for her crimes against the state.
The plot thickened, as it turned out that Hopkins himself had a deeper connection with the renowned Royalist, having several meetings with the woman in which he fabricated stories regarding his history in order to conceal his Puritan leanings and win her trust. Quite what Hopkins could want with Lady Whorwood is hard to determine, but Deacon speculate that she was in fact paying Hopkins for information, and that it was this role as a double-agent that ultimately led to Hopkins’ own downfall. 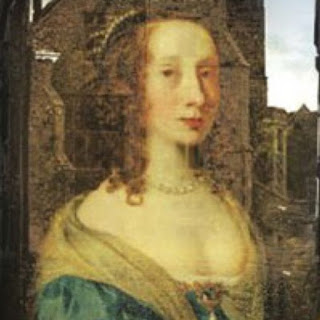 Often mis-identified as Lady Jane Whorwood;
it is in fact a portrait of her sister.
Hopkins was, according to Deacon, finally swum as a witch himself, the Tendring Witchcraft Revelations asserting that:
“He was soe treated by his owne methodes of establishing Witches in parte by objections to his methodes by a few of his neighbours but farrre more soe by reason of the facte that he was discovered to be in league with the Lady Whorewood, an error of judgemente which seems strangelie out of character.”
This leads rapidly to the conclusion Deacon has evidently been building to; allowing that the Tendring Revelations accept that there is a record of burial for Hopkins in the Mistley parish church, the document goes on to say that:
“nobodie in the localitie was present at hys burial and if buried he was at Mistley it may have beene outside the precinctes of the Churche in the dark of night when noone else was about his business.”
His final suggestion based on this evidence is that Hopkins left the country in 1647 and fled to America, where he continued his witchfinding enterprises until the end of his days. tThe burial record, he posits, was faked by Hopkins’ own mother, an easy thing to do if she was, as Deacon suggests, the second wife of Thomas Witham, the parson at Mistley at the time. 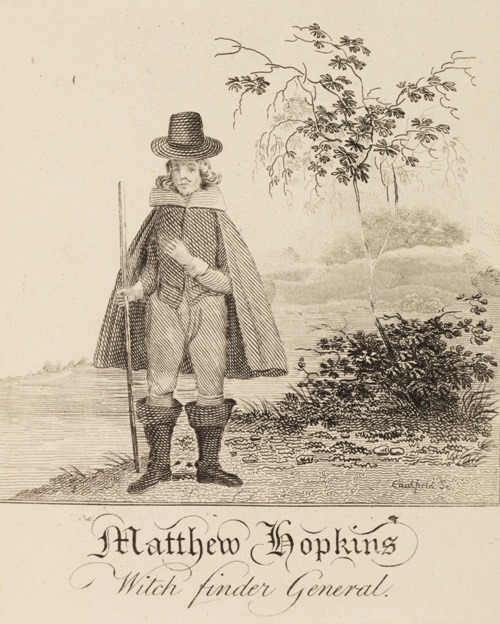 Intriguing, thought provoking, and a definite page turner, unfortunately things are not as they seem. Richard Deacon was the pen name of Donald McCormick, journalist, historian, and former naval intelligence officer.  With a penchant for writing about sensational topics such as Jack the Ripper, Hellfire Clubs and The Cambridge Apostles, McCormick specialised in “revealing” previously unknown “facts” to a fascinated readership. Utilising to the full the maxim that a lie is most convincingly hidden between two truths, McCormick slotted his inventions almost seamlessly into historical lore, a series of what can only be seen as hoaxes.
So what of the Tendring Witchcraft Revelations and the theories Deacon/McCormick created around the supposed contents of the document? While still referenced by the unwary writer today, it is generally accepted that the “document” was in fact a product of the author’s imagination. It has never been seen, and it is safe to say that it never existed outside of the fabricated quotes scattered through his book on Hopkins.
There is also  no evidence outside of this that Mary Lakeland had anything to do with either Matthew Hopkins or Lady Jane Whorwood. 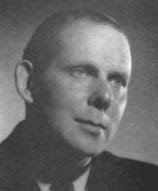 Donald McCormick, 1959
McCormick never publicly admitted to the various hoaxes he perpetuated during his writing career, and died in 1998 at the age of eighty-seven. There are, however, clues if you choose to look; in Matthew Hopkins: Witchfinder General he makes the ironic observation that:
“Not only are many records missing, but some of them have been tampered with, others are false, and some blatant forgeries.”