Skip to content
I’ve written many, many words on Anne Wagg, the Derbyshire woman accused of witchcraft by her fellow residents of Ilkeston in 1650. She is, after all, both my “local” witch, and responsible for the journey that led me to write my first book on the subject of accused British witches.
My initial research suggested strongly that Anne Wagg had met the – practically unheard of for English witches – fate of burning for her crimes. This fact was readily attested to by several Victorian annalists, such as John Charles Cox who declared that:
“… there is little doubt that Anne Wagg was burnt to death on evidence that now-a-days would not even convict a poacher.”
As I continued to look into events in 17th century Ilkeston, however, it became clear that there was much more to the story than Cox and local historian Edwin Trueman would have us believe. 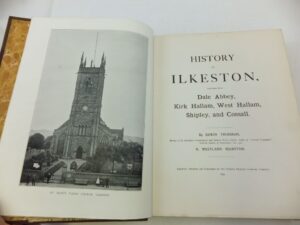 In his History of Ilkeston, Edwin Trueman repeated the claim
that Anne Wagg was burnt for bewitching the people of Ilkeston.
In late April/early May 1650, Bridget, the wife of Ilkeston vicar William Fox, was taken ill. Anne Wagg was summoned to the suffering woman’s side so that Bridget could scratch her – hard enough to draw blood – in order to break the hold of the “witch” over her. This was common practice in earlier cases of witchcraft accusations, and a belief that continued well into the 19th century, despite attempts to root out such “superstition” by those higher up the social and economic scale.
It was highly likely that this open display of support for the idea of Anne being a witch from one of Ilkeston’s authority figures led to what happened next. On 1 June, 1650, baker Francis Torrat made accusations against Anne to Gervase Bennett, Justice of the Peace for Derby. According to Torrat, Anne was guilty of several counts of witchcraft, and was well known for tormenting those who displeased her. Three years previously, after exchanging “words” with Torrat and his wife, their maid servant Elizabeth had an encounter with Anne that led to her falling ill and being unable to move. That night, the maid had called out in great distress, but neither Torrat nor his wife were able to help her as they too were paralysed. It was only when a cat that had been sitting on the maid’s bed leapt clear that they were free to help their distressed servant, the implication being that the cat was either the witch or a familiar doing her bidding. Local folklore belief was utilised to confirm the identity of the witch in question: when tongs were placed in the fire, it was believed that the witch would be unable to leave. This was performed and, as expected, Anne was held prisoner until the tongs were removed. 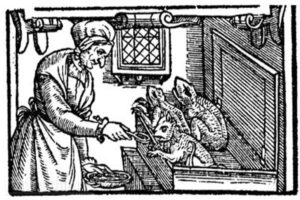 it is unclear whether the cat that tormented the Torrat’s maid was
believed to be a familiar spirit for Anne or that it was Anne herself.
(Image: Wellcome Collection, London)
Other Ilkeston residents, following Torrat’s example, spoke out against Anne on 26 June. Alice Day told how a few years ago Elizabeth Webster had accused Anne on her deathbed of bewitching her. Despite being urged to pardon Anne and thus pass with a clear conscience, Webster refused to do so.
Elizabeth Goddard, proving that local memories could last a long time, related that fifteen years ago she and Anne had quarrelled over some whey. Anne had wanted to buy some from her, but Elizabeth Goddard refused, on the grounds that it was to be sold to her sister. When the Goddard’s child fell ill that same night, it was clear that Anne was to blame – especially when, after seeming to recover, the child died a fortnight later after Anne was denied butter from the Goddards.
Grieving Anne Ancoke blamed Anne for the death of her fifteen year old daughter only days before she gave her evidence. Taken suddenly ill, the girl said that she believed herself to be witch-ridden, and although Anne Wagg was summoned to her bedside so they could ask forgiveness of each other, it was too late to save her.
Alice Carpenter told the justice that Anne was a woman of “ill repute” and that this was well known throughout Ilkeston. due to this reputation, when her own child sickened and died in 1649, Alice was certain that Anne was to blame. From an examination of local records, it becomes clear that Anne and her husband George were not popular figures in Ilkeston. Anne spoke her mind too often, and George was too free with his fists; both prone to losing their temper, both with others and each other, if they had friends it was likely they were few and far between. George Wagg died in 1646, leaving the way clear for those who disliked his wife to make a move when the time proved right. A further source of Anne’s bad reputation is also revealed by the parish registers: an illegitimate son, Thomas Wagg,  “son and Anne, and Thomas Cant, the reputed father” was buried in 1657, while another potential child to Anne and Thomas was baptised in July of 1646, only five months after George Wagg’s death.
Although there is ample evidence for why Anne was a prime witch suspect, quite where the idea that she met a fiery end came from is unclear. What is revealed by the Ilkeston parish registers however is that Anne did not come to the end that the Victorian reporters would have us believe. Anne was buried in the local church yard in 1663, strongly suggesting that the accusations came to nothing and that the Ilkeston witch continued to live side by side with those who accused her for another thirteen years. Despite this, the assumption that she was executed continued well into the 20th century, perpetuated no doubt by the erroneous belief that witches were commonly burnt for their crimes.

Read more about Anne Wagg and other women accused of witchcraft in Accused: British Witches Throughout History available from Amazon and Pen and Sword Books.