Skip to content
Within three years of the accession of James I. the new Act against witchcraft was put in force in the county of Derby, the witches of Bakewell being burnt to death in 1607; but the stores of the Public Record office refuse to yield any information as to their number or the particulars of the offence, so that we can do no more than chronicle the fact.
John Charles Cox, Three Centuries of Derbyshire Annals.

Famed today for its pudding of the same name, Bakewell also lays claim to being the scene of one of Derbyshire’s very few “known” witchcraft cases. Although reported in various accounts from the 19thcentury onwards however, it is unclear quite where the assertion that witches were executed in Bakewell originated and if it is indeed based on any sort of fact whatsoever. Whilst Cox is quite right in asserting that there is no documentary evidence relating to the case, however, that has not stopped chroniclers and historians alike from repeating various versions of the following tale.
Mrs Stafford was a milliner by trade, and alongside that business she ran a boarding house with a woman who was said to be either a close friend or sister. How her trade went or whether there were problems before this point is unknown, but the two women would come to rue the day they took in a certain Scotsman as a lodger.
For some time later, this man was discovered in a London warehouse where he had no business to be; suspected of robbery, he was arrested and taken before the magistrates, where he related the most curious tale. He had, he swore, absolutely no idea how he had come to be where he was found. The night before he had been lying in bed in his lodgings in Bakewell, when he was disturbed by a sudden and bright light shining up through the floorboards of his room.
Intrigued, he left his bed, kneeling to peer through the cracks. In the room below he saw Mrs Stafford and her partner, looking as if they were about to embark upon a journey. Given the hour this must have greatly surprised him; even more startling however was when Mrs Stafford stopped to recite the following:
“Over thick, over thin,
Now Devil to the cellar in London.”
The two women then abruptly vanished, leaving the startled lodger staring down into a now darkened room. Somewhat foolhardy, he repeated the words to himself, but with one, somewhat crucial, error:
“Through thick, through thin,
Now Devil to the cellar in London.”
This slight change to the wording apparently made all the difference, as instead of a nice gentle vanishing the next thing he knew he was propelled by an unseen force with the power of a whirlwind, travelling at great speed until he finally, much to his relief, came to a stop in the very cellar where he had been found. When he finally came to his senses, he recognised the two women were also with him, busy with parcels of silk and muslin which they had, no doubt, gained through nefarious purposes. What he would have done is unclear, as they gave him a drink that turned out to be drugged – he fell into a deep sleep, and when he awoke he was facing the angry men who had found him.
His dishevelled appearance (it must be remembered that the man was clad only in his nightclothes) confirmed in the judge’s eyes the man’s story, as did his assertion that if further proof were necessary, the lodging house in Bakewell should be searched in order to discover items of his clothing that he described in detail. The search was duly carried out and the garments found – Mrs Stafford and her partner were arrested, found guilty, and executed.
A more mundane explanation has been put forward for the story, one that would, if believed, have led to quite a different outcome. It was said that the Scotsman had fallen behind in his rent, and Mrs Stafford had taken it upon herself to hold onto some of his clothing, either to sell it or in the vain hope of recovering the money owed to her. It was the discovery of these items in her possession that ultimately provided the proof of the “witchcraft” carried out upon the lodger, and for which, it is said, the two women lost their lives. 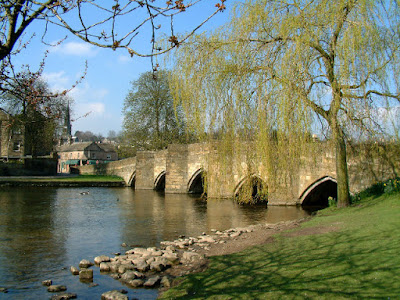 Where the actual tale came from or was first reported is not clear. William Wood relates it in his Tales and Traditions of the Peak of 1862, adding that:
No incident connected with Bakewell is of that appalling character as the legal murder of two ignorant women, who were seized at their residence in Bakewell, dragged to Derby, and barbarously hanged, on the ignorant charge of witchcraft; and this so recent as 1608, in the reign of that witch-ridden monarch, James the First.
The tale is also recounted by Bakewell’s chronicler, White Watson, and in various books of Peak District folklore and strange tales.
It is not quite clear why Mrs Stafford and her partner would have received the harsh penalty of the death sentence; their actions as related would not have led to them being punishable by death under the 1604 Witchcraft Act. There are no assize records available for the time, and indeed they are very poorly represented for Derbyshire as a whole, only being in existence from the 1930s, so any “facts” of the case, if it took place at all, are regrettably lost to us. 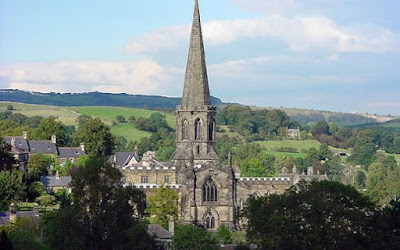 All Saints, Bakewell
The parish records for Bakewell start only in 1614, but they do provide evidence that a family named Stafford was indeed established in the area at that time. There were several branches; John and his un-named wife had eight children baptised at All Saints, Bakewell, between 1620 and 1636, whilst William had three children between 1615 and 1619. George and Christopher each had one a piece, both baptised in 1615. Given these dates, it is possible that the three men were potentially sons or nephews of the Mrs Stafford who may have met her fate in 1607.