Skip to content
Over the summer I bought a small book of Derbyshire ghost stories. Whilst flicking through I came across a tale that caught my attention relating to Tupton Hall near Chesterfield. Today there is a school on the site where the old hall used to stand, but it was once an opulent country estate in the possession of the prosperous Lord family. According to the legend, Mr Lord, a wealthy Chesterfield miller:

“Was returning home one evening when he was waylaid and robbed by a masked highwayman. He was convinced that it was the family coachman, and, although the poor man swore his innocence, Mr Lord had him tried, convicted and hanged.”

The kick to the story comes in the ending, as we are told ominously:

“Just before his execution, the man swore a curse on the family and predicted that disaster after disaster would follow.” 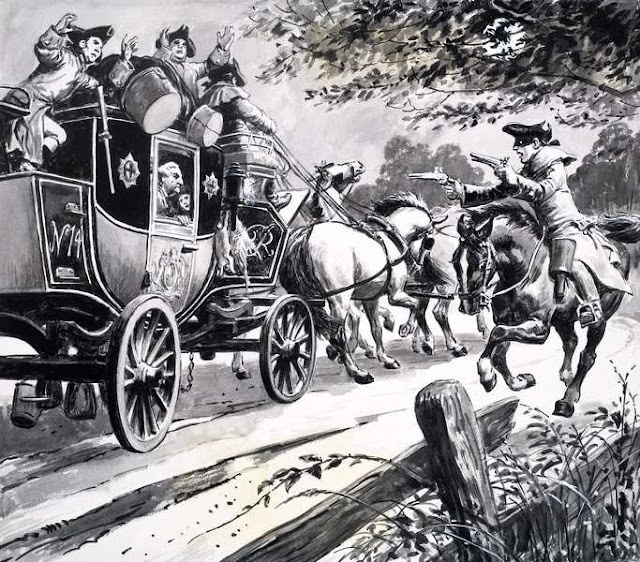 A fascinating albeit rather standard ghost story to be sure, and I experienced the shiver that the writer intended. As with so many stories however I was left with the desire to know what, if any, truth lay behind it. After some digging and exchange of emails with a very helpful gentleman from the Tupton Local History Society, the following came to light, through a piece in the Derby Mercury,dated Thursday, 27th December, 1739.

We hear from Chesterfield, that on Saturday night last, Mr Lord of Temple Normanton, near the said Town, going from Chesterfield Market, was attack’d by a single Highwayman on his Return Home, who robb’d him of 10l and two Gold Rings; and that about a Quarter of an hour after Mr Tag of the same Place, with his Wife behind him, returning from the said Market, was also robb’d by the same Highwayman; and that a grey mare belonging to — Pyot Esq; of Highfield near Chesterfield, was taken out of a Stable at the Angel Inn there, the same Night, which was thought (by the Description given) to be the same the highwayman was mounted on; Mr Pyot, upon sending his Servants out to search for her, found her turn’d up, and in the Road Home with Bridle and Saddle on.”

It would seem that this was indeed the Mr Lord mentioned in the tale of the Tupton Curse; Temple Normanton was only about a mile from Tupton, and it is likely that Mr Lord was returning from Chesterfield to Tupton Hall when the attack occurred. The report ends with the information that a man named Dolphin had been taken in under suspicion of being involved in the crime, having been tried at the last Lent Assizes for “stealing one Moydore and 3l. 1s. from Mr Inman of Chesterfield.” Although he was acquitted of the previous crime, the man had now been committed to the Chesterfield House of Correction for questioning over the theft from Mr Lord. 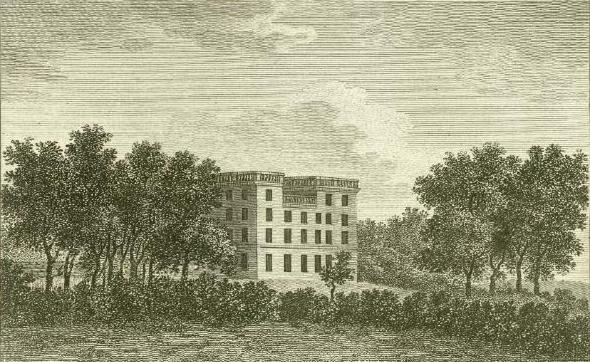 Tupton Hall, c.1800
A series of relations in the Derby Mercury for 1740 adds further details. On 27th March it is related that at the Assizes that lasted the previous Friday, three people were sentenced to death; Samuel Gilbert, for the crime of stealing a black mare, and:

“William Dolphin and James Hill for Robbing Mr Lord near Chesterfield on the Highway, of a considerable Sum of Money.”

Richard Thompson and Joseph Baron were also suspected of being involved with the robbery, but were acquitted. Whilst James Hill and Samuel Gilbert were granted a reprieve, William Dolphin was not so fortunate, the sentence standing, and the report ends with the information that:

“The Rev. Mr. Christie intends to preach next Sunday about 4 o’Clock in the Afternoon, in the Debtor’s Apartment, to the Prisoner under Sentence of Death.”

The Derby Mercury for 3rdApril contains the announcement that William Dolphin was to be executed the following Wednesday, and that:

“He still persists in denying the Crime for which he is to suffer, and declares himself to be as innocent as the Child unborn.”

A week later on the 10thApril the same paper carried the information of William Dolphin’s final days and execution. Dolphin; aged thirty-three, unmarried, “well-proportioned, and seemingly of a strong and healthy Constitution,” was apparently extremely diligent in his prayers during his imprisonment, resisted every attempt of the various clergy members and guards who attended him to extract a confession, the prisoner remaining steadfastly silent on the matter other than to say that he was innocent. As the time approached:

“After Service he stayed some small time to take Leave of his Relations, then walk’d to the Place of Execution, betwixt two Clergyman, Reading all the Way.”

Dolphin was asked again for a final time if he had committed the crime for which he was to die, or if he knew who had or anyone who had anything to do with the matter, the grave peril of dying with a guilty conscience gravely impressed upon him. They were to be disappointed however as:

“To all which he declar’d he was innocent, and knew nothing more of it than by the Noise of the Country.”

The condemned man then took the time to warn any young people present to take his example as a warning and to avoid bad company, and also to declare that he forgave everyone completely.

“Then leaping into the Cart, he stripp’d off his Coat with Seeming Courage, and being ty’d up forgave the Executioner, after which the Cart was drawn away.” 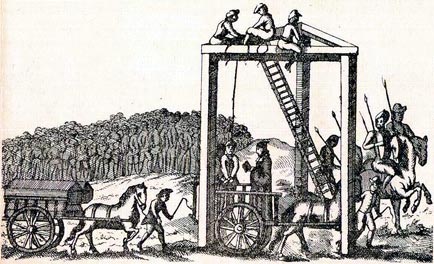 Any further details of William Dolphin’s end are omitted, the account ending with the final remark that his body was interred in St. Peter’s Churchyard.
Another intriguing piece of information was the revelation that James Hill, Dolphin’s supposed accomplice, had sworn that:

“… the said Dolphin, chang’d Coats with him, and was the Person that robb’d Mr Lord, and that he (Hill) was ordered by Dolphin to stand behind a Hedge near the Place where the Robbery was committed, that so if any Resistance was made, he might come up to Dolphin’s assistance.”

Whatever the truth of the matter, James Hill did not escape punishment entirely: a final account in the Derby Mercuryfor 6thAugust relates that both Sam Gilbert and James Hill had been ordered to be transported for fourteen years after their “reprieve.”
The Mr Lord who was the victim of the robbery was in fact William Allwood Lord Esq, son of William Lord and Jane Allwood. A local man, he married Dorothy Gladwin on 26thJune, 1738. Dorothy was the daughter of Lemuel Gladwin senior, who was in turn the son of Thomas Gladwin who built Tupton Hall in 1611, and the marriage of Dorothy and William Lord marked the passing of Tupton Hall out of Gladwin hands and into the Lord family. (Lemuel Senior’s son had died without children, and so the hall passed through his daughter’s line.)
The Reverend James Christie who preached before William Dolphin’s execution was also not without scandal attached to his name; in 1741 a poem was published with the title The Polygamist: or, the lustful priest, Giving an account of one James Christie, a clergyman, who is now confin’d in Derby jail, for having two wives. It was not the first time he had been imprisoned for the offence either, having been likewise confined in 1738 when his marital shenanigans caught up with him. 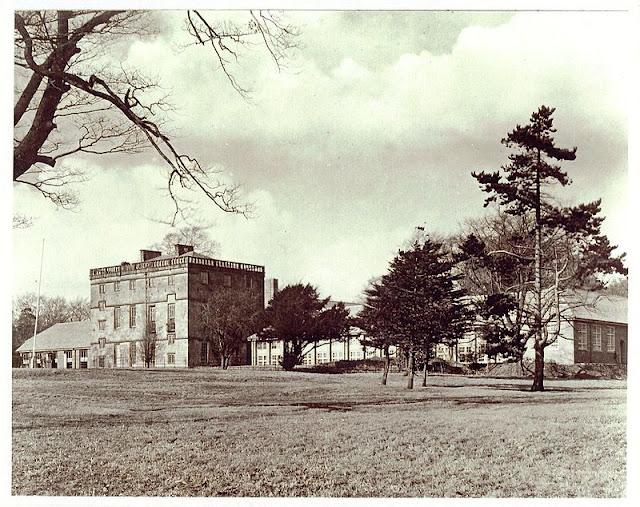 Tupton Hall – as it was between 1928 and 1938
And what of the curse? There is no mention of it in the newspaper accounts dealing with the case, on the contrary, it was reported that William Dolphin forgave everyone involved, and it would be unlikely that such a juicy detail as a vow of vengeance would have been omitted by the press. There is also no mention of Dolphin having been William Lord’s coachman, and this “fact” could likely have been a later addition to the legend.

It cannot be disputed however that Tupton Hall saw its share of tragedy in the years that followed. The Lord family line eventually died out, and the hall was purchased and turned into a grammar school, only to suffer a severe fire two years later in 1938. 1955 saw not only the suicide by hanging of Charles Oswald Drabble, the school’s headmaster, but also, shortly after, the death of Miss Bansall, mathematics and science mistress of Tupton Hall after she fell or threw herself under a train at Chesterfield Station. A further fire in 1974 and more damage caused by a falling tree in 1990 only served to fuel the rumours of the curse set many years before. Despite this, Tupton Hall School is currently one of the largest secondary schools in North East Derbyshire, and one of the largest six forms in the county.
159 death sentences were passed in Derbyshire between 1735 and 1799. Thirty-five of these were actually carried out, including that of William Dolphin.
*********
I am deeply indebted to Trevor John Armstrong of the Tupton Local History Society, who has provided much of the information above and taken the time to share his findings.
Newspaper quotes Derby Mercury, 27th December 1739, 27th March, 3rd April, 10th April, 6th August. © The British Newspaper Archive