Skip to content
Jane Wenham has been a favourite “witch” of mine since I first came across her case, and the last few weeks have been spent exhaustively researching her life and the trial that brought her such long-lasting notoriety. I’ve read every pamphlet, poured over parish registers in an attempt to trace every last family member until my eyes hurt, and driven my husband quietly round the twist with constant references and speculation. (Obsessive? Me? Never.)

With my chapter on Jane now finished I’m forcing myself to step away from the Witch of Walkern, but there remains one final mystery that I still haven’t been able to quite solve to my satisfaction:
Where was Jane Wenham’s final resting place? 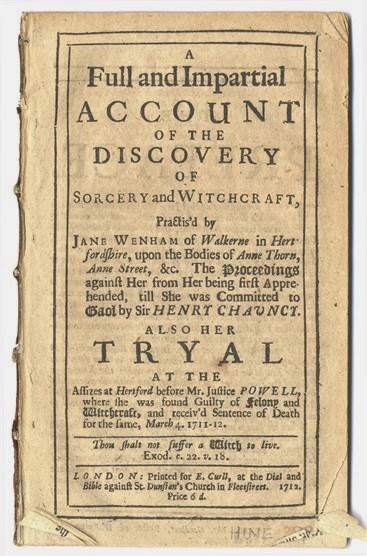 There is an almost overwhelming amount of information on Jane’s later life and the allegations made against her. Accused of bewitching Anne Thorn, a maid in the household of the Reverend Gardiner of Walkern, Jane came to trial at the Hertford Assizes in March, 1712. There she was convicted and condemned to death, and would have faced the gallows if not for the intervention of the judge, Sir John Powell and a subsequent royal pardon from Queen Anne herself.
After her acquittal, Jane did not remain in Walkern. She went to live on the estate of Colonel Plummer of Gilston Park, and, after his death in 1720, was taken in by the wealthy Cowper family in Hertingfordbury, Hertfordshire. Several books and websites state that Jane died and was buried there, but finding the actual sources to prove it have been somewhat trickier than expected. 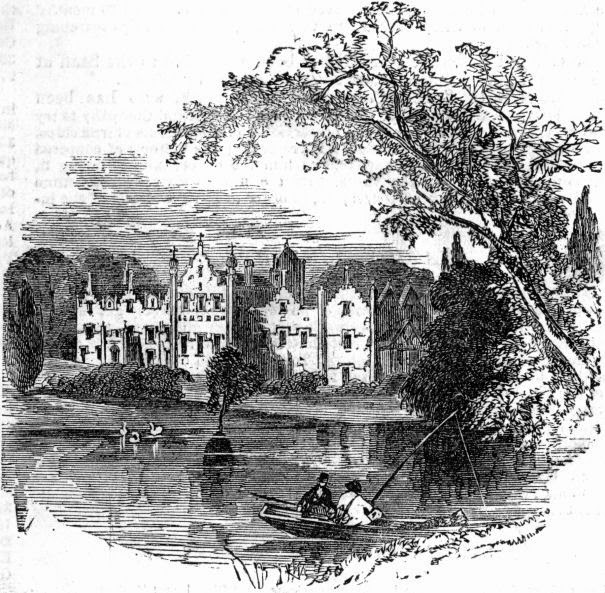 Gilston Park, Demolished in 1851
In the course of my digging, I was glad to find I was not the only one to have had my curiosity piqued. In the Hertford Mercury and Reformer, 31st December, 1887, an inquisitive reader wrote:
One can with little difficulty picture the village gossips, big and little, eagerly discussing the event, while the children mention her name only with bated breath; and how fast the youngsters would scamper past the abode of the witch in daylight, while not even the riches of a millionaire would tempt them to pass it at nightfall.
A country gentleman who had taken great interest in the case kindly allowed her to live in some rooms over his stables, and supplied her with food and appointed her as nurse to his children.

If any gentleman in the county has an old pamphlet in his possession concerning the Walkern witch, would he kindly give a few extracts? – J. J.
The following response was obligingly given a few days later:
The Walkern Witch

In answer to “J.J” (December 30th), I have a book in my possession which I bought in Cambridgeshire in 1849, which was printed “at the Blackboy, Paternoster Row, 1712”, containing a full confutation of Witchcraft, more particularly of the depositions against Jane Wenham, of Walkern, who was condemned as a witch at Hertford, in which notions of witches are overthrown and the evil consequences of such doctrines are exposed by arguments proving that witchcraft is priestcraft. – S. W
J.J was clearly not satisfied with this however, returning with another query in March of that year. After giving a brief outline of the case for those who might not be familiar with it the writer concludes:
From this interesting note we gather the names of her benefactors, and also the date of her death, etc. The thought has struck me that possibly there may be a head-stone in Hertingfordbury Churchyard to her memory. Can any reader inform me whether such is the case? – J.J. Whitehall. 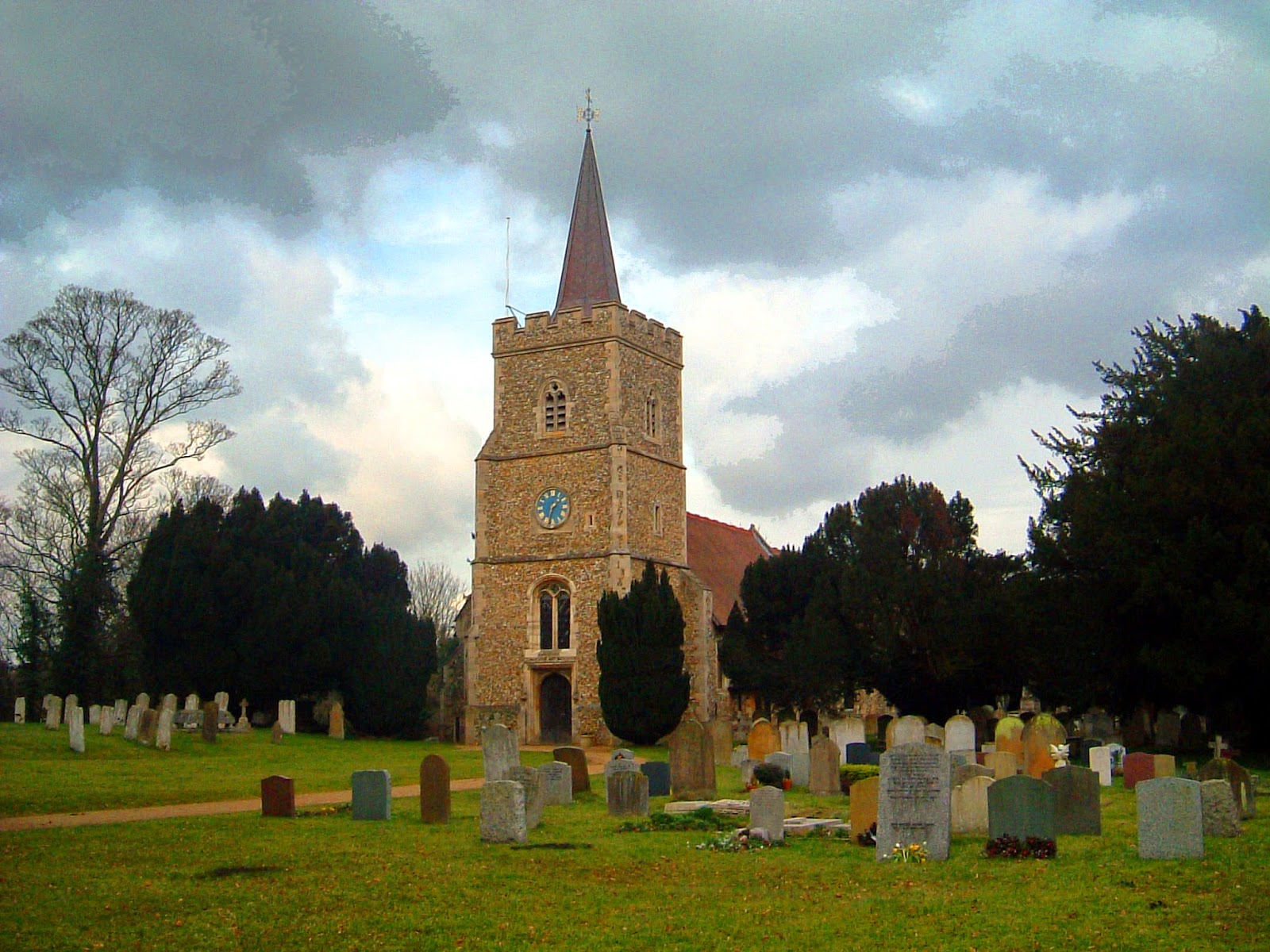 St. Mary’s, Hertingfordbury
The exchange does not appear to have revealed any answers and spurred the interest of another ready who on 28th July, 1888, decided to take matters into their own hands:
The Walkern Witch

Note – March 31st – I cannot find that there is any record of the burial of Jane Wenham, known as the Walkern Witch, in the parochial registers at Hertingfordbury, nor does there appear to be any memorial of her in the churchyard there. I am somewhat disposed to think that she was not buried at Hertingfordbury, but she may have been interred at Walkern, where she lived when she was reputed to be a witch, or she may have found her last resting place at Gilston, as she was a recipient of the charity of Colonel Plummer, of Gilston Park. It would be satisfactory if someone would kindly search the registers for the year 1730 of each of these parishes to ascertain the facts.
W. F. A
W.F.A is indeed correct; there is no record of Jane’s burial in the parish registers for Hertingfordbury – nor for Walkern, Gilston or nearby Hitchin either. The registers are clear and legible and there are no gaps or suspiciously faded areas that could be hiding the elusive entry. One might almost be tempted to wonder if the rumours of Jane’s abilities were true and she simply disappeared.
Half an answer at least, however, can be found in the Day Book of Sarah Cowper, daughter of the Earl who took Jane in. In an entry for 16th December 1729, she recorded:
“Mr Squire the curate of Hertingfordbury gave me notice of the death of Jane Wenham, a poor woman become famous through the folly of her neighbours, being the last woman in England (or at least in this part of it) that was tried and condemned for witchcraft.”
She goes on to relate how Jane had been under the family protection for the last decade, with her brother paying forty shillings per year for her rent. A couple of years previous to her death, Jane, worried that the end was near, had starved herself of food in order to save enough money to pay for her burial when the time came. Being told by Sarah that it would be taken care of, the old woman was greatly reassured, also asking that a sermon be given that would clear her name once and for all of the slur that was still attached to it. 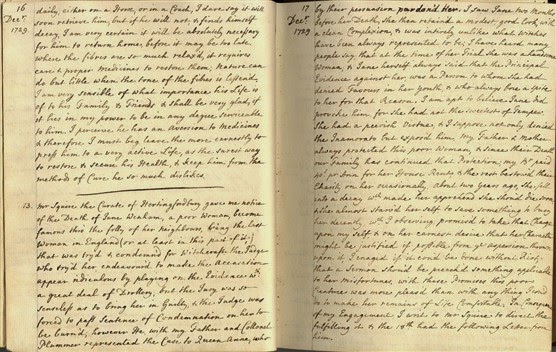 Sarah Cowper’s Day Book
Although making such a promise, in the end the funeral had a different focus. As told to Sarah Cowper by the curate (implying that Sarah herself did not attend) we learn that instead of touching on matters of witchcraft and blame he:
“… made a practical discourse, concerning the nature and duty of a good life and the blessed consequences and reward that attend good people after death, Our Church was prodigiously crowded, the fullest that ever I saw it on any occasion, and there was the utmost decency during the whole service; no whispers, no noise or disturbance, no tendency in the least to mirth and laughter.”
He ended with begging Sarah’s pardon for the change in topic, hoping that she would approve. There is little doubt that she would, given her own misgivings expressed in her diary that to try to clear Jane’s name would do nothing more than provoke a riot.
So Jane’s funeral did indeed take place at St. Mary’s Hertingfordbury. It is natural to assume that after the sermon in the church her body would then have been taken to the graveyard beyond and buried. Why then no record in the registers? Having been suspected of witchcraft in the past did not automatically exclude someone from burial in church ground – Anne Wagg of Derbyshire for instance was buried in the church yard at Ilkeston several years after accusations were made against her. An unmarked grave makes sense in order to deter vandalism and unwanted attention, but the complete lack of record in the parish registers remain a mystery. 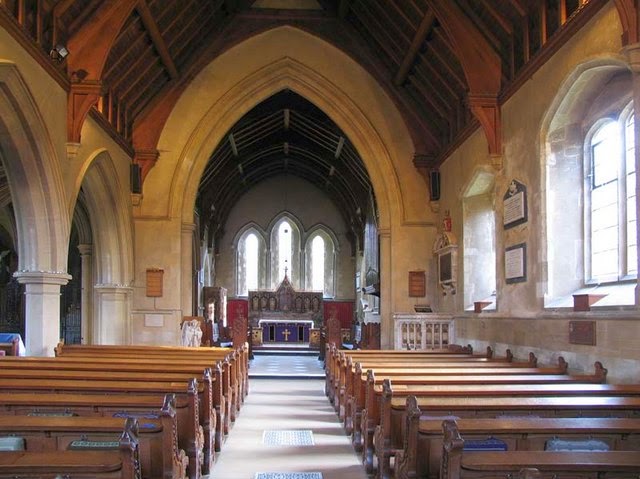 Inside St. Mary’s, Hertingfordbury
It is not only the whereabouts of Jane’s earthly remains that stands unsolved. The website of the Walkern History Society has the following appeal:
Her portrait is believed to have been painted at the request of Lady Cowper, and was sold when the Cowper estate at Tewin Water was sold at auction in 1841. The Hertfordshire Mercury and Reformer on 2nd January 1841 reported “Amongst the paintings is a portrait of Jane Wenham, a native of Walkern, who was convicted at Hertford Assizes in 1713 [sic] of witchcraft and sentenced to be hanged, but afterwards reprieved. We are told that it was taken at the instance of Mr Cowper’s grandmother, who took great interest in the fate of the unfortunate woman, and was instrumental in obtaining her reprieve.” It was later reported that “the portrait of “The Witch” was sold for 18 guineas.”
Nothing more is known of the painting, and the newly formed Walkern History Society, who have recently been awarded £7400 from the Heritage Lottery Fund to promote the history of the village, would love to know of any leads that they could follow up.
Please contact Dr Janet Woodall through the website at www.walkernhistorysociety.co.uk. 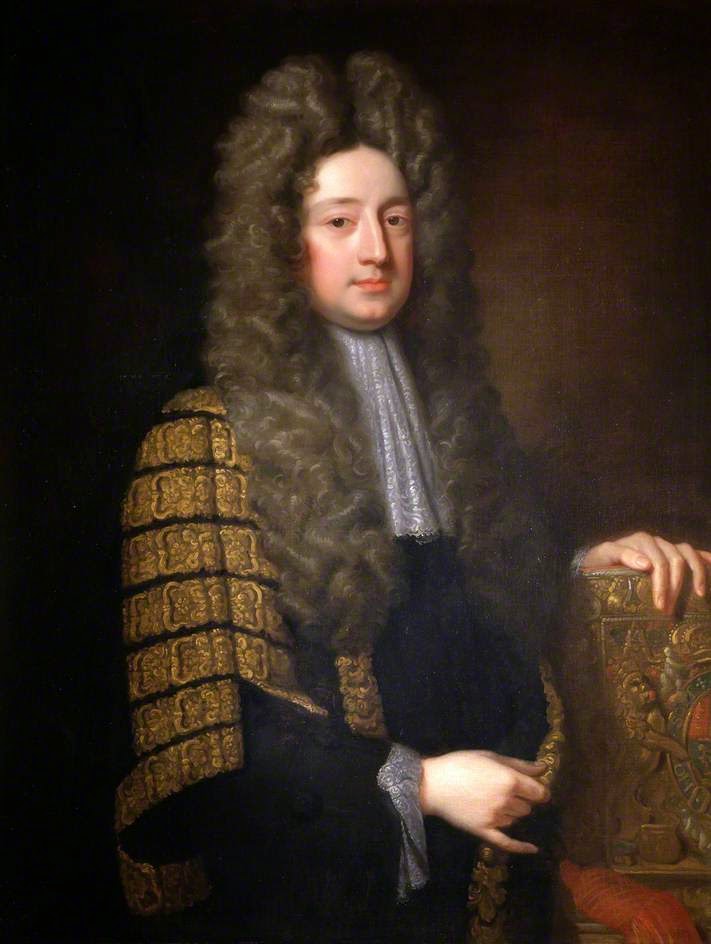 Many thanks to the lovely people at Hertfordshire Archives and Local Studies who have responded to several emails in my quest to work out what became of Jane.

My previous post on the Wenham case can be found here