Skip to content
What would you think if, after an argument with your mother, your dairy maid fell ill and your cheese-making attempts ended in disaster? Some might put the matter down to coincidence and bad luck, but for Thomas Charlesworth of Abbots Bromley, Staffordshire, the answer was clear.
He had been bewitched. 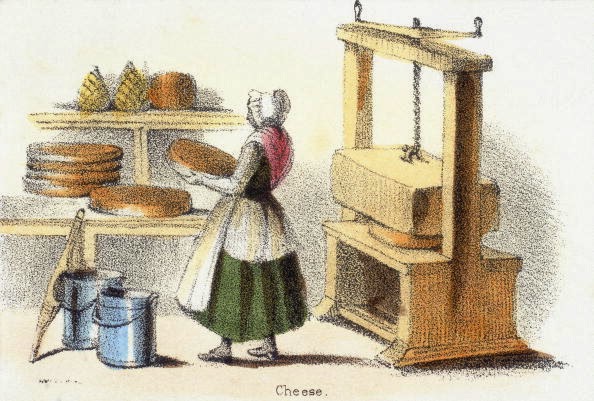 Cheese Making
A farmer of sixty-five acres, Charlesworth had taken over the family property on his father’s death in 1848, on the understanding that his mother, Elizabeth, would remain living there as long as she wished. This comfortable arrangement was upset in December 1855, when he married his cousin, another Elizabeth Charlesworth, a match of which his mother disapproved. She moved out in the following February but continued to visit, warning on one occasion that they should not attempt to make cheese or else it would “tumble to pieces.” The Charlesworths, however, did not heed her words, and several attempts at cheese making ended in disaster. Not only that, but the farmer, his wife, and the dairymaid fell ill from an unknown cause.
Listening to his woes, and agreeing with his assessment that bewitchment was the cause, a neighbour told Charlesworth to seek out James Tunnicliffe, a local man known as the Bromley Wizard who “could do anything” and was well-known for his expertise in sorting such matters. Accordingly, on Saturday 26th April, Charlesworth and his wife made the four mile journey to Tunnicliffe’s home. After hearing their story, Tunnicliffe said he would visit their farm the next day, but that he would have to tell his wife that he was going to see about some calves, as she did not like his “going about on that business.”
He came as promised, pronouncing, (without seeing the animals, much less the maid and the kettle), that the cows were bewitched, as were the horses, dairy maid, wife and cheese kettle. There was nothing to worry about though, as he, Tunnicliffe, would rectify the situation if Charlesworth would only do as he instructed. This translated into a demand for money; Tunnicliffe initially charged three shillings six pence per cow (there were twenty-seven of them), and five shillings each for the maid, the cheese kettle and Charlesworth himself. Charlesworth’s wife was not as badly bewitched as the rest, and she could be made well by having a piece of fabric taken out of her dress. He was also to send to a man named Conyway in London for a spell book. 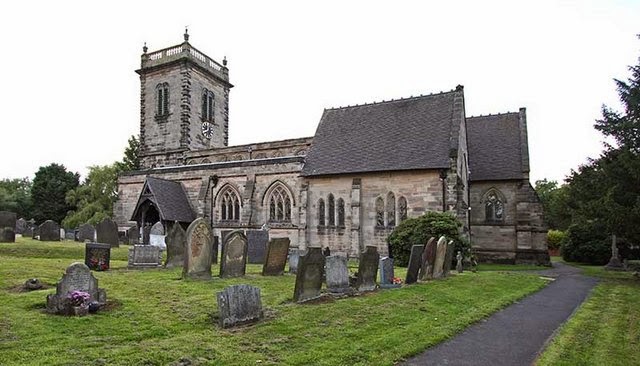 Abbots Bromley Church
Tunnicliffe took lunch with the family and then returned to his home. On Monday, with no improvement to maid or cheese, Charlesworth went again to visit Tunnicliffe. The older man agreed to come the next day and see how things were, and after drinking some ale, Charlesworth returned home. Arriving there, he found himself feeling unwell, with pains in his chest and head. Shaking and shivering he retired to bed.
When Tunnicliffe arrived the next day, he told Charlesworth to take some brandy, explaining that the reason for his sickness was that he had been engaged in battle with Old Bull of Yeaverley on Charlesworth’s behalf, a man who dealt in witchcraft and had been employed by Elizabeth Charlesworth to bewitch her son. It would take more money to lift the bewitchment, three shillings six pence for the remaining animals, five shillings for the baby and another five for “good and chattels.”
Impressed, and by this time convinced that his mother was the cause of all their ills, Charlesworth employed Tunnicliffe to also work as a labourer on the farm, perhaps to help the old man hide what he was doing from his disapproving wife. Both Charlesworth and his wife continued to suffer from sickness, for which Tunnicliffe gave various explanations; a man named Cotton at Longton had bewitched him (something Tunnicliffe sorted at the cost of a pound), and his mother had likewise engaged the services of Arnold from Bradley High and another man from Kingsley in her quest to torment him. On one occasion, the couple accompanied Tunnicliffe to Froghall Station, where they waited at an inn for him to return, during which time Mrs. Charlesworth experienced being shaken and scratched by forces she could not explain. 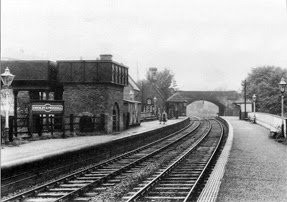 Froghall Station, Staffordshire
Despite Tunnicliffe declaring his success each time, matters did not improve. This was, the wizard insisted, due to the determination of Charlesworth’s mother, who was consorting with wizards as far away as Derby in order to achieve her terrible aims. Each time a new threat was discovered, Tunnicliffe would go off to do battle with the forces of darkness, and each time, Charlesworth’s purse was a little lighter for it.

On the farm, the situation worsened. Strange noises were heard throughout the house; winds blew down corridors, curious disturbances happened in the yard, the cows “lamented”, the horses “pranced” and the dogs made an awful racket throughout the night. A phantom dog was witnessed running into the house, appearing to be “all on fire”. The apparition ran through a closed door before vanishing, much to the consternation of all concerned. Charlesworth and his wife continued to experience strange bouts of illness and their infant daughter, Elizabeth was also taken ill, dying of unexplained convulsions.
Matters finally came to a head when the Charlesworth servants made complaints against Tunnicliffe, blaming him for the unrest in the household. With his staff threatening to leave if Tunnicliffe remained, Charlesworth had no choice but to dismiss him, his own suspicions no doubt growing by this point. Tunnicliffe departed on the 16th February, upon which the strange happenings and symptoms experienced on the farm ceased. Encouraged to pursue the matter, Charlesworth went to the authorities, and Tunnicliffe was apprehended on 25th February, charged with obtaining money under false pretences and drugging Mr Charlesworth. 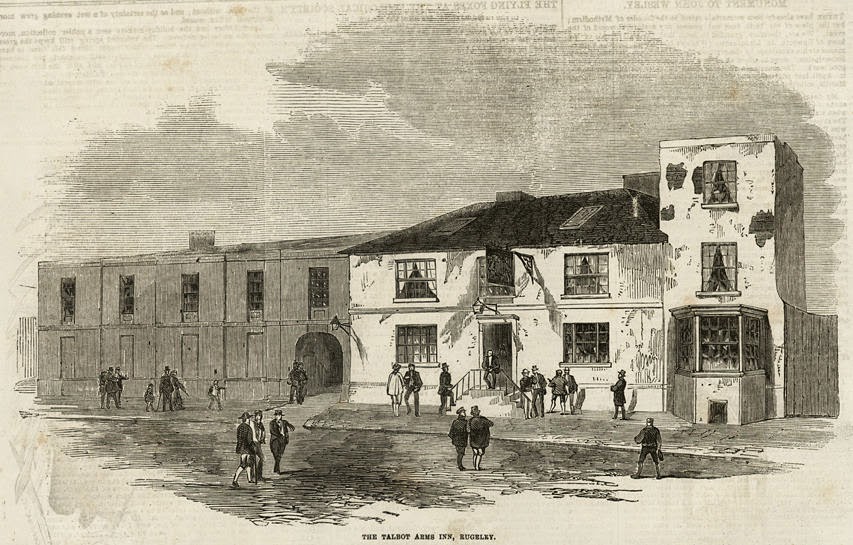 Talbot Arms, Rugeley
The case was heard at the Talbot Arms, Rugeley, six miles from Abbots Bromley. The room was large and crowded, and the general atmosphere was recorded as one of amusement, with much hilarity to be had at the expense of the Charlesworth’s bewitched cheese kettle and their lamentable gullibility as they gave their version of events. Several servants and neighbours of the Charlesworth’s also came forward to give evidence, no doubt glad to see Tunnicliffe get his comeuppance.

The fact that the bouts of illness coincided so often with eating with or been served food by Tunnicliffe, was explained by the discovery of a parcel of “root and leaves” in Tunnicliffe’s house. Bryonia dioica, as was explained by a doctor attending the trial, had “violent and irritating properties” and, in some cases, was known to cause death and miscarriage – the latter experienced not only by Charlesworth’s cows, but also Mrs Charlesworth herself.

Despite the overwhelming case against Tunnicliffe, it was not an entirely straightforward journey to conviction; a “false pretence” was part of the indictment, but, for that to be proven, it must be established that there was something real or factual to pretend to in the first place. Witchcraft was, by the passing of the 1735 Witchcraft Act, now legally not a recognised reality. This didn’t help the prisoner in this case, however, and Tunnicliffe was found guilty at the next assizes, and sentenced to twelve months in prison.

General opinion was divided; while some derided Tunnicliffe for his actions and agreed he deserved whatever was coming to him, others were less sympathetic towards the Charlesworths, declaring that punishing Tunnicliffe served only to encourage people in clinging to superstition and credulity. There was also the suggestion that class played a part in the outcome, with one newspaper opining that:
“If James Tunnicliffe had had the wit to set up as a medium, and give seances to the aristocracy, he would have made a good thing of it, and would not now be picking oakum in gaol.” 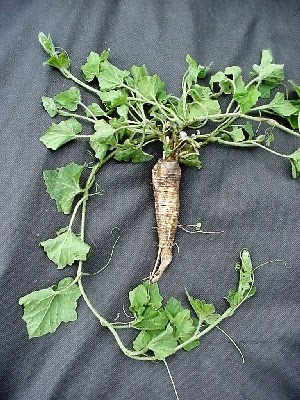 Bryonia dioica
The incident with Tunnicliffe no doubt left Charlesworth older and, one would hope, a great deal wiser; in the 1861 census we find him living with his wife and three daughters, with one hundred and eighty-four acres to his name, plus two labourers and one boy. How his cheese-making progressed there is no record, but he died in 1876, at the age of forty-eight.
Who was James Tunnicliffe? Born around 1796, he married Maria Birch in Abbot’s Bromley in 1819, and the couple had several children together. His occupation is given as agricultural labourer in census returns, and brewer in the newspaper reports of the trial, where he is referred to as a beerhouse keeper of Thorney Lane. He died in 1874 at the ripe old age of eighty-one, but not before at least one more incident of scandal blackened his name, as related in the Staffordshire Advertiser, 28thMay, 1864:
“Assault On A Child. James Tunnicliffe, of Thorney-Lane, was charged with an indecent assault upon Elizabeth Jackson, of Abbots Bromley, a girl 13 years old, on the 20th instant. The offence was proved against the old ruffian, who is 70 years of age, and figured a few years ago in the notorious witchcraft case, but as it was not of such a nature as to call for a heavy punishment, the bench convicted him summarily, and awarded him one month’s imprisonment with hard labour.” 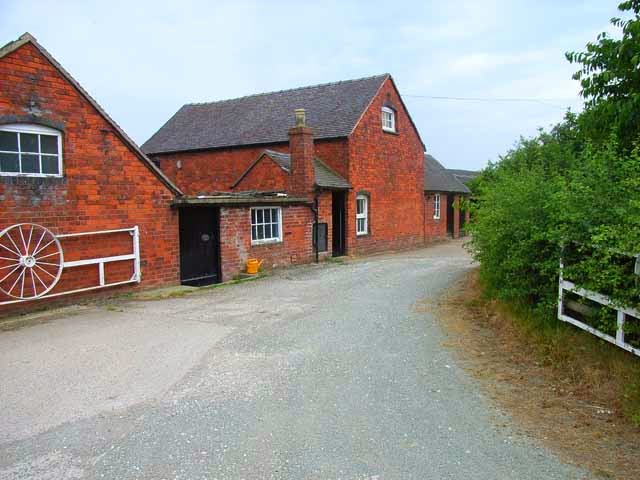