Skip to content
Stanton Cemetery is just a short walk away from where I live, but it was over a year and a half after we moved to Ilkeston that we actually made a pilgrimage to visit one of the town’s most famous residents – the Ilkeston Giant. 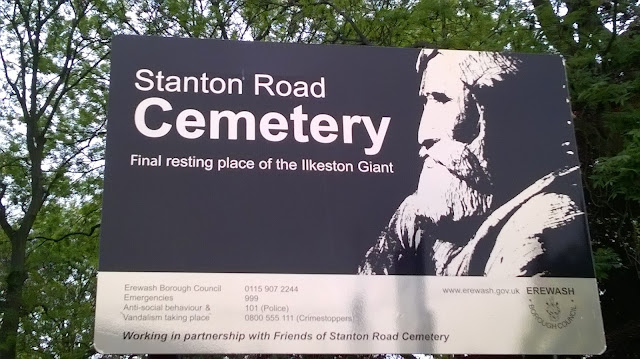 Samuel Taylor was born in Little Hallam on 4th June 1817, and christened on 16th October at St Mary’s Church, Ilkeston.  His father, another Samuel, was a farmer, standing at the impressive height of six feet nine. His mother Ann was a more modest five feet, but it was clear from the start that Samuel junior was going to take after his father. By the age of ten he was nearly six feet tall, and at fourteen measured six feet ten. His height continued to grow, and finally in adulthood Samuel Taylor was seven feet four and a half inches tall.
It was upon visiting a fair at Castle Donnington in 1832 however that Samuel realised his true calling. In his own words:
“I entered the exhibition – a curtain was drawn, and discovered a man, perhaps about six feet three. All eyes were turned upon me. I stood beside the giant, and made him look very insignificant.
He was much chagrined at my intrusion, as he called it; became very violent, and struck me. Now, I was quite a youth – only sixteen, and he a man of thirty. I had never fought, and was always inclined to be peaceable, but the blow seemed to arouse the man within me. I madly attacked my rival, and notwithstanding his superior weight and strength, I succeeded in making him cry peccavi.” 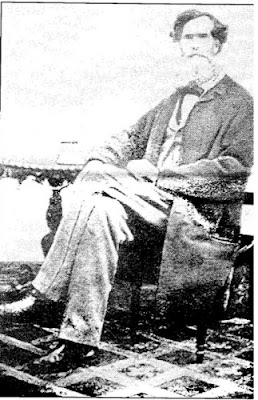 Taylor was duly hired to replace the man he had beaten, and remained with this fair for many months, travelling around the country. His new employer had a daughter however, and Samuel fell in love. She was a glass blower, and very good at her act, and returned Samuel’s feelings. Her father however was not happy, and Samuel was told to move on.

The couple were not to be thwarted and eloped to Montrose – although her father followed, and even had their luggage seized, he came around when he realised that his daughter consented to the match and didn’t pursue an arrest. His unwilling father in law eventually came round to them, taking Samuel back to work for him and even giving the newly weds five pounds as a gift.

The Taylors had an interesting time of it over the following years. They first set up their own show together but it was not very successful; Samuel then started work with a railway company but found that did not go so well either. Finally he made the decision to go back to performing, and took his fair back on tour. This time things went better and they amassed some money; with their savings Samuel bought a pub in Manchester and set up business there. It was soon clear that they were losing money again, and finally the couple went back to their fair, and the Giant to the work he loved. 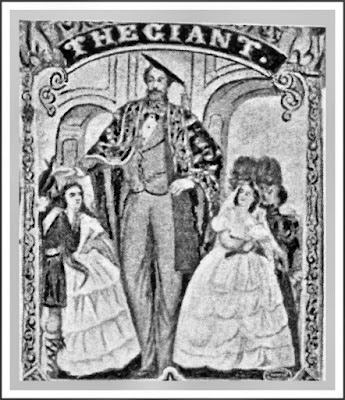 Although he travelled around the country, Samuel Taylor had a great fondness for his hometown of Ilkeston and often returned there, one such visit being in 1869 when he brought his own show to the Ilkeston Statues Fair. His acts included a crying crocodile, a golden boa constrictor, and the Mrs Taylor Glass Blowing Exhibition by his wife. When it came time to leave the town each time he was said to have had a habit of looking back, keeping on looking until it finally disappeared from view.
In 1875, tragedy struck. Samuel Taylor had an accident whilst preparing his fair to leave Oldham; he slipped and fractured his thigh. He was admitted to hospital in Manchester and appeared to be improving, when a sudden and unexpected relapse occurred. The Ilkeston Giant died on 3rd June, 1875. He was fifty-nine years old, and was survived by his wife and two sons.
His coffin was taken by train to Ilkeston (in the days when the town had not one but several stations) where it was met by the local brass band. The bells of the church were muffled, and Samuel Taylor made his final journey from the Independent Chapel to Stanton Road Cemetery.

“After many vicissitudes in life, the towering form of the Ilkeston Giant, cut down at the comparatively early age of 59, now rests amid the bones of those who delighted in their life-time to do honour to a man “mighty in stature”, honest in purpose, and grateful in heart.” 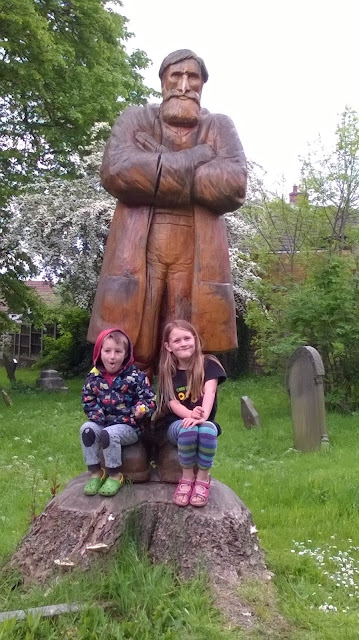 Visitors to the cemetery today can spend a while with The Giant in his final resting place. Restored and rededicated in 2008 in a ceremony with Robert Lindsay (another of Ilkeston’s famous ex-residents), Samuel Taylor’s memorial reads: