Skip to content
It is with great pleasure that I welcome Chris Woodyard to The Witch, The Weird, and The Wonderful for this week’s Wednesday Weirdness with a curious tale of burning beds in Cleveland, Ohio. Was it witchcraft, poltergeists or was something else to blame for the terror that struck the Busch family?

In studying that most elusive of supernatural creatures, the poltergeist, it becomes obvious that poltergeist manifestations go far beyond the species’ signature rappings. While some poltergeists knock, others throw and break objects or make them vanish. “Stone-throwing devils” hurl mysterious showers of stones that never do more than lightly bruise. Still others, less benign, slash clothing and set fires.

In 1880 a German family living in Cleveland, Ohio found themselves at the centre of an extraordinary and terrifying incendiary poltergeist incident.
IS IT WITCHCRAFT?
MYSTERIOUS FLAMES IN A CLEVELAND DWELLING.
“Cleveland, Ohio, April 28th. An extraordinary series of mysterious fires has occasioned an unusual sensation in one of the outlying wards of this city, and as yet no solution to their strange cause has been furnished. Bedding and articles of domestic use have caught fire from no apparent cause, and an entire family has not only been kept in constant terror of flames, but has been subject to pecuniary loss that falls hard upon a man who can ill afford to lose even so much as a dollar. 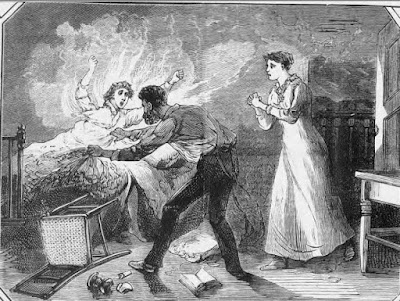 “A short time ago there came to this city from North Amherst, a hard-working and honest German named John Busch, whose principal worldly goods were a “poor man’s blessing” of eleven children. Two of these latter were twins at their mother’s breast…
Shortly after Busch removed to Cleveland his family began to be troubled by fires breaking out in various parts of the house without any apparent cause. Busch was living in a house on Lincoln Avenue, and, becoming imbued with the belief that the place was haunted, he removed to 77 Lussenden Avenue, where he thought he would find relief from the annoyance…”
The new house was a small one and the front parlour was set up as a bedroom with three beds for children, as well as a baby’s crib in one corner. On Sunday, April 18th, shortly after moving in, the parents, several children, and a few friends were sitting in this room chatting, when someone noticed a thread of smoke coming through the key-hole of an unused closet behind one of the beds. An old suit of clothes—the only garment in the closet—was found burning briskly. The fire was quickly put out, but the family was baffled as to how it had started. Worse was to follow.
“On Monday when Mrs. Busch, in going about her domestic duties, entered a pantry used for dishes, she was startled to see flames rising from the shelves. In a moment the paper which had been used for lining the shelves was consumed, and nothing remained but the ashes, while the dishes were blackened with the smoke. Some relatives were summoned to the house by one of the children, and while they stood in the kitchen discussing the strange occurrence the child’s crib in the front room began smoking, and upon their hastening to extinguish it a hole was found burned clear through the bed-tick.”
In the next few days fires flared up in several rooms of the house. After yet another mattress was consumed by fire, the terrified family fled. But the first day at the new house, one of the beds was burned to ashes; the next day a hen’s nest in the back yard was consumed.
“Saturday, while Mrs. Busch was in the coal-shed adjoining the kitchen, she saw smoke rising from an old coat that was hanging on a nail. She says that the fire seemed to begin about the middle of the back. It was ruined before she could put the fire out.
“The terror of the family increased day by day. The children were kept out of school to watch for fear the house would be burned. On Sunday a number of friends and relatives stayed during the day with the terrified people… Shortly after the bed caught fire, and was burned for a space of several feet before it could be extinguished. The stock of straw-beds was now exhausted, except one which on Monday met with the fate of the others.”
A correspondent for the Cincinnati Enquirer visited the family and found the family in a “pitiable state,” while the Busch’s friends and neighbours corroborated their incredible story. The mysterious flames were reported to be a hellish blue and they had a particular target: the household beds. As an aside, would it be possible for straw-beds to spontaneously combust? Straw was usually thoroughly dried before being stuffed into ticks. 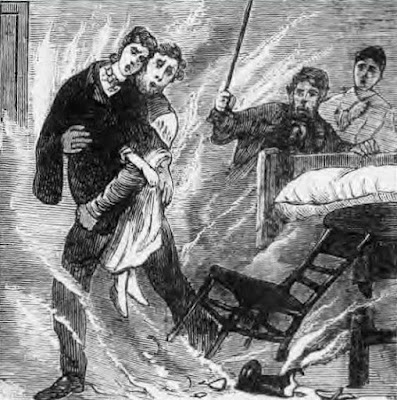 Wrote the reporter: “The fire had absolutely burned all of their bedding except a couple of feather-pillows and a feather-tick. The mother was almost distracted, while the father acted like a man bereft of his senses.”
Enter an accusation of witchcraft:
“A rather strange feature of the mystery was called out by the declaration of an old German lady that if they would look in the feathers of the feather tick they would find a solid wreath of feathers, which was “the witch” that was causing the trouble. She said that if they would boil this “the witch” would be destroyed and they would suffer no more annoyance. Acting on her advice, they ripped open the tick, and, sure enough, there was a wreath of feathers several inches thick, forming a ring about ten inches in diameter. On Monday they gave it a vigorous boiling, but it did not prevent the return of the fires.
Mr. Busch has had to abandon his work to watch over his family, all of whose members are in constant dread of some serious calamity.”
The “wreath of feathers” or feather crown, was a well-known sign in German lore that the family had been bewitched. Boiling the crown was supposed to either bring the malefactor to the house so they could be forced to remove the curse or neutralize the witch’s power.
Although the wreath-boiling did not work immediately, apparently the fires ceased without any of the family being incinerated, for here the story ends, as far the newspaper coverage goes. According to the census, the Busch family was still alive and well in 1900 Cleveland.
What was termed “witchcraft” in an 1880 German community today might be labelled “telekinesis” or “poltergeist activity.” Some who study poltergeists say that the attacks are highly symbolic and often reflect—quite literally—difficult family dynamics and stressors. What the mechanism might be is not specified.
If we care to play psychologist, we might note that the family bedding was the main target for the fires. Perhaps Mrs. Busch, who was about 37 at the time of the fires and went on to have at least two other children, was exhausted by fulfilling her marital and maternal duties. No beds, no bedclothes, no “bedding,” and no more babies? It’s a theory impossible to prove. Poltergeist activity has also been linked to adolescents–possibly one of the eleven children was a fire-starter in a very real sense. But whether witchcraft or a Fortean “wild talent,” the mystery, I fear, is long past solving. Ashes to ashes… 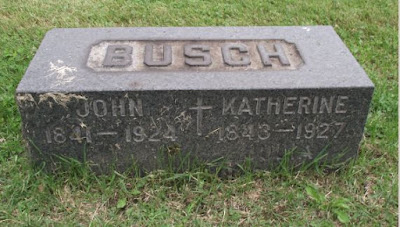 The full story of the Busch family may be found in The Face in the Window: Haunting Ohio Tales. All quotes in this story are from Cincinnati [OH] Enquirer 29 April 1880: p. 4

Thanks to Undine of Strange Company for the Illustrated Police News Images. 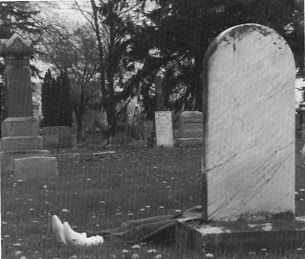 Chris Woodyard is the author of The Victorian Book of the Dead, The Ghost Wore Black, The Headless Horror, The Face in the Window, and the 7-volume Haunted Ohio series. She is also the chronicler of the adventures of that amiable murderess Mrs Daffodil in A Spot of Bother: Four Macabre Tales. She blogs on international fortean topics here and on costume and the ephemera of history here. You may find her on Facebook at Haunted Ohio by Chris Woodyard, The Victorian Book of the Dead, and Mrs Daffodil and on twitter @hauntedohiobook.