Skip to content
A lovely little book that I am very fond of browsing through is Bygone Days in Devonshire and Cornwall. First published in 1874, it contains various weird and wonderful West Country superstitions and customs, and also makes mention of “an account of a trial at Taunton Assizes, on April 4, 1823, in which three females were charged with stabbing an old woman, a reputed witch.” 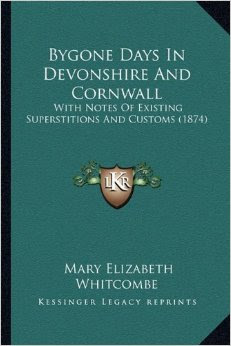 It appears that this attack was carried out at the behest of a man named Baker, a well known wizard in Devonshire, and a dig through the newspaper archives produced the following story in the Taunton Courier, and Western Advertiser for 9th April, 1823.
Elizabeth Bryant and two of her daughters had been before the courts a few days previous, charged with assaulting and beating the widowed and elderly Ann Burge in Wivelscombe on 26th November, 1822. The mother had grown concerned when a third daughter of hers had fallen ill, experiencing fits that no one could explain. In her distress, Elizabeth Bryant had visited the aforementioned Baker for advice and she returned home convinced that her daughter had been bewitched and that Ann Burge was the cause.
It seems Baker also recommended some medicine for the ailing daughter to take as a cure, advising that:
“The jar of mixtur is to be mixt with half-a-pint of gen (i.e gin),and then a table-spoon to be taken mornings, at eleven o clock, four and eight, and four of the pills to be taken every morning fasting, and the paper of powder to divided in ten parts, and one part to be taken every night going to bed, in a little honey. The paper of herbs is to be burnt, a small bit at a time, on a few coals, with a little hay and rosemary, and, while it is burning, read the first two verses of the 68th salm, and say the Lord’s Prayer after.”
Whether this remedy did any good is not recorded, but Elizabeth Bryant had repeated to several people what Baker had told her, and it was not long before Ann Burge heard the rumours circulating that she was a witch and a cause of the Bryant girl’s suffering. Understandably aggrieved at this, Ann Burge called at the Bryant household to ask Elizabeth Bryant if she was behind the rumours. Meeting Elizabeth Bryant in the alleyway that led to her house, Ann Burge demanded:
“Betty Bryant, I be come to ask you a civil question, whether I bewitched your daughter?”
Elizabeth Bryant’s response left no doubt as to her feelings on the matter as she told the older woman:
“You damned old bitch, you have bewitched my daughter for twelve months past, and I be all the worse for it.”
At this, Elizabeth Bryant flew at Ann Burge, attacking the old woman and threatening to kill her. Bryant’s two daughters appeared on the scene and were quick to help their mother, two of the women holding Ann down whilst the other scratched her arm deeply with a nail. Not satisfied with that, Elizabeth Bryant was heard to call several times:
“Bring me knives to cut the old bitch’s flesh from her bones, for she shall never go home alive.”
In the space of the brawl the women ended up out in the open street, where Ann Burge was finally rescued by the crowd that had gathered to witness the spectacle. Badly shaken and hurt, with her arms torn and lacerated, the old woman was will for at least a month following the attack.
The judge presiding over the case made his feelings known on the subject, deploring the “infamous knavery” carried out by Baker on the gullible Bryant women. The newspaper agreed wholeheartedly with the Judge’s recommendation to the Magistrates that “they would not allow another Sessions to go over without arraigning him upon the Vagrancy Act, to the penal provisions of which he was doubtless amenable.”

Elizabeth Bryant and her daughters were found guilty and sentenced to four months imprisonment. Still ruminating on the case, a week later on 16th April 1823 the same newspaper printed another piece on the matter, reporting that:
“The observations of the Judge in passing sentence on the unfortunate simpletons whose conviction was mentioned in our last, may be useful in dispelling the doleful and mischievous superstition which even at this day prevails among the ignorant on this subject.”
Among other things, the Judge was at pains to inform the Bryant women and those assembled that their behaviour had been utterly unacceptable, making it very clear that the law would not now tolerate such attacks against anyone for whatever reason as he told the defendants:
“Remember well what I say to you. You are not prosecuted and tried for any opinions which you may entertain, but for carrying those opinions into violence and outrage against a fellow subject, whom the laws equally protect.”
Remonstrating further, he told Elizabeth Bryant and her daughters that they should have gone to the magistrates with their concerns, not taken matters into their own hands. He also reassured the women that there was no truth whatsoever in their fears regarding witchcraft in any form, pointing out that if they believed in God (something which he found himself sadly doubting given their display) then they should not think for one moment that the Almighty would allow such a thing to happen as they accused Ann Burge of. His opinion on Baker was unequivocal as he observed that it would be a great service to take him before the magistrate, declaring of the self-styled wizard that “he is a nuisance that ought speedily to be got rid of.” 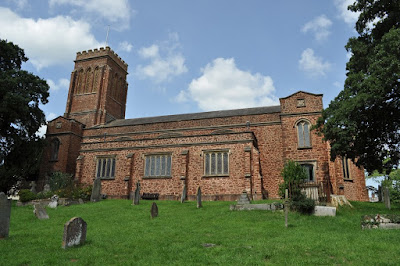 The Church of St Andrew, Wiveliscombe
Along with this, the Judge was in no doubt that Elizabeth Bryant would have killed Ann Burge if she had the means to do so, reminding her chillingly that:
“As it was, you and every one of you stood in peril of your lives for the offence you have committed…. It was my doing that you were prosecuted for this assault, instead of being tried for your lives.”
Although he had saved them from facing the noose, the Judge did not feel at all inclined to let them off entirely, as although he put the majority of the blame at the nefarious Baker’s door:
“… yet it is necessary to visit you with a punishment that will cause you and everybody to remember that it is at the peril of severe punishment, if they act upon such ignorance and folly.”
Taunton Courier, and Western Advertiser, 9th April 1823 www.britishnewspaperarchive.co.uk.