Skip to content
Spiritualist medium Helen Duncan is most frequently remembered for being the last person convicted and imprisoned under the 1736 Witchcraft Act in 1944. Revered by some as the most talented physical medium in history and reviled by others as a monumental fraud, Helen did not work alone. Like many mediums, she believed fully in the support of spirit guides – entities from the spirit world who acted as a bridge between the living and those who had passed over. 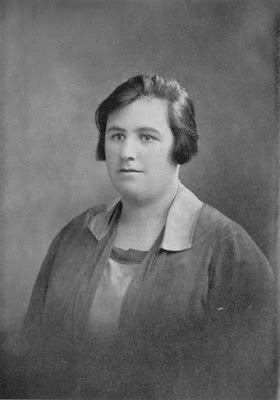 Helen Duncan
Helen had several guides after she started to develop her gift of mediumship, but one in particular stayed with her for the majority of her career and made the biggest impact on both Helen’s work and the lives of those who knew her.
Albert Stewart made his first appearance around 1927, when the dangerously erratic Matthew Douglas was deemed no longer suitable to be Helen’s spirit “control” after he threatened to kill the medium. According to accounts of the meeting, Albert introduced himself as having been born in Scotland around 1883, where he had lived before emigrating to Australia with his parents. There he became an apprentice pattern maker, but died in 1913 at the young age of 33.
Unlike the reprehensible Douglas, Albert was, by all accounts, of a much calmer nature. According to Helen’s daughter Gena’s recollections, the newly arrived control reassured Helen and those gathered with her, declaring that “Together we will move forward to a better understanding and better phenomena.” Indeed Albert did not fail to deliver: under his guidance Helen’s career as a physical medium took off in a way that no one had expected.
Far from just guiding Helen in seances, Albert became a full member of the Duncan family. The children referred to him as “Uncle Albert” and they prayed to him along with God to protect them and keep them safe. Helen herself kept a picture of a bust of Albert in her own bedroom, and one of the family homes was named Albertine partly in his honour.
Albert’s word was law in the Duncan household, with many of his words of encouragement and guidance staying with Helen and her children alike many years after they were uttered. It was a good thing that he was listened to, as there were several occasions on which it was believed Albert saved the lives of those he watched over. At the end of his very first appearance he warned Helen and Henry that they should tell the hospital where poorly Gena was being treated that she should be moved from the doorway: it was timely advice, as the ill child was later discovered to be suffering from pneumonia. Another time Albert expressed his concern about a mutual friend, contributing to a later diagnosis of skin cancer which was then kept at bay through the guide’s advice. Albert was even believed to have saved Helen herself: in the operating room where the medium was undergoing a hysterectomy, a voice was heard declaring that the surgeon had cut far enough. This was discovered to be the case, but afterwards no one present would or could admit to having uttered the words. When the voice was described to Helen’s husband, Henry Duncan, the mystery was deemed to be solved – Albert, Henry declared, had spoken again. 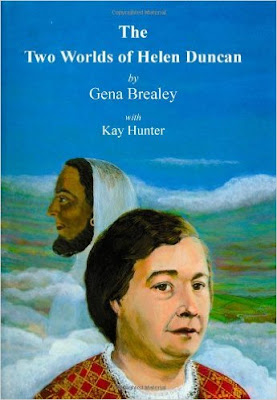 The Two Worlds of Helen Duncan, containing
Helen’s daughter Gena’s recollections of her mother
and Albert.
There were times however when Albert was not heeded so closely, leading to disaster for the medium he attempted to protect. Albert had tried to warn Helen of impending danger before an ill-fated séance in 1933, telling her to take care, (though not specifying of what.) The seance turned out to be a trap, and Helen was arrested for suspected fraud. Albert spoke out again in 1944 when Helen was running a series of seances in Portsmouth for the Master Temple Psychic Centre: he stressed that a gentleman in naval uniform should not be admitted to one seance, and again a few days later advised that a group of three men should be turned away. The cost of not heeding Albert’s words were far greater this time: Helen was arrested, charged, and found guilty at The Old Bailey, sentenced to serve nine months imprisonment in Holloway Prison.
Many people spoke of their experience of Albert over the years he worked as Helen’s guide. One thing on which almost everyone commented was his voice. The aforementioned surgeon described the mystery voice he heard as an “Oxford” accent. The President of the International Spiritualist Federation described Albert’s voice as “One of the most musical voices” he had ever heard. Other attempts to describe the voice they heard were “A nice masculine voice,” and “cultured Australian,” and the glowing report by one witness of Albert being “the nicest spoken man I have ever met.” One of the few people to deny Albert his Oxford accent was Hannen Swaffer, the renowned drama critic who was one of Helen’s staunchest supporters – his objection was that the “Oxford Accent” was a fabrication and purely a “BBC idea”. When pressed for his views on the voice of Helen’s guide he eventually said he had heard it described as Cockney and also Australian, but that he himself simply thought it “natural”.
Personality-wise, Albert was a convincingly human mix of contradictions. Whilst courteously referring to Helen as “Mrs Duncan” at all times, that did not prevent him from making jokes at the medium’s expense. There are several recorded instances of him joking about her substantial weight, along with complaints about her smoking habit and the resultant coughing that was one of his pet peeves. Albert was also not without a sense of humour: on one occasion he invited a Dr. Rust to examine him during a séance at the London Psychic Research Centre, quipping afterwards that the Doctor would be able to tell the others that he was indeed “all man.”

When in a genial mood, Albert gave permission for photographs to be taken by those he considered sympathetic, and was happy for spirit forms to be looked at closely, even giving permission on occasion for samples of ectoplasm – the substance that came from the medium’s body and of which the spirits were formed – to be taken and studied. He also – as befitted his role of Master of Ceremonies – was given to a certain amount of showmanship. Once when asked if phenomena could occur if Helen was bound he showed that indeed it could, tying and freeing the medium in the space of seconds to an amazed audience.

Seance sitters sometimes came in for Albert’s acerbic wit, but there was one person in particular who provoked his ire more than any other: Helen’s husband Henry. At various time he is reported as having called Henry an ass and a fat head, and even on one occasions threatened to strangle him in utter exasperation. 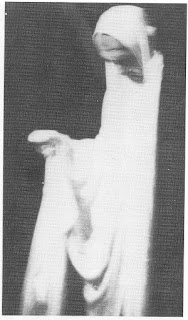 A photograph of a spirit form taken with
permission by Albert.
At Helen’s trial in 1944, many came forward to give testimony that they had witnessed Albert and heard his voice. They had heard him speak, and some had even touched him, one speaking of an occasion where the obliging guide had put his very real bare foot into a sitter’s hand. Others told of how they had felt Helen’s hand and then Albert’s – one rough and small, the other smooth and long fingered. There were times when the two had actually been seen standing next to each other – Helen at 5ft 4, with Albert towering over her at just over 6 feet tall. These were rational, sensible people, respected members of their communities with respectable jobs and lives, all willing to testify that Albert Stewart was very, very real.

Not everyone was so convinced though. There were some who declared that “Albert’s” voice was nothing more than the medium’s, not even that cleverly disguised. Others insisted that there was little distinction between Helen and her guide, and that the additional height was created through tricks and poor lighting. Others complained that Albert was poorly formed, and looked like cloth with barely visible features.
Despite divided opinion as to his existence, it mattered little to Helen and her family, their belief in Albert continued right until the end. In 1956 as Helen lay dying,  Albert was there with her, telling visiting friends two days before her death that “We are talking Mrs Duncan home. She has well earned her rest.” The bond remained: shortly after her passing, Helen sent a message via another medium that Albert had been there to meet her on the other side. 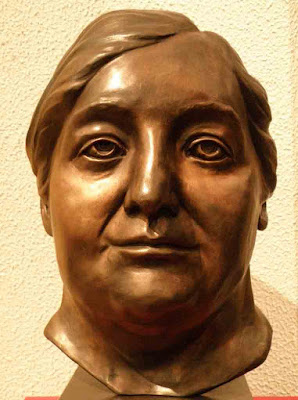 Unlike some spirit guides, There is currently no evidence of Albert having being a true historical figure before he passed into spirit, with no record of birth or death discovered so far to corroborate his story of his origins.  Does anyone have any information on the historical Albert? If so it would be great to hear from you.

And for those curious to hear the voice of Albert for themselves, a rare recording from a Helen Duncan seance can be found here: Albert is the first voice to speak.