Skip to content
The St. Osyth witch trials of 1582 saw thirteen women tried for a variety of witchcraft-related crimes at the Chelmsford Assizes. One of those was Cicely Sellis from Little Clacton where she lived with her husband and children. Cicely entered the long and engrossing narrative of the St. Osyth trials on 1st March, 1582, when Richard Ross, also of Little Clacton, Essex, informed Justice Brian Darcy of the following.
Six years ago, Cicely’s husband, Henry Sellis, had worked for him in the fields many times without incident. On one occasion, however, two horses that had previously been well suddenly fell down and died while Henry was in charge of the plough. As if this were not strange enough, shortly before the incident, he had refused to sell Cicely the two bushes of malt that she required, due to the fact that she wanted to pay three shillings when Ross swore they were worth ten groats. Not to be deterred, Cicely had then gone to Ross’ wife and asked to buy the malt from her in turn: again she had refused to pay the going price and the two women had fallen out.

Then there had been the incident with cattle belong to the Sellis family; Ross’ wife had discovered the beasts on their land and had driven them off. Seeing this occur, Cicely had angrily remonstrated with Ross’ wife, and, shortly after, some of the Ross cattle began to behave in a most strange fashion. Richard Ross was of the opinion that the cause of this was witchcraft, carried out by either Cicely or Henry Sellis.
Finally, twelve months ago a barn full of corn belonging to Ross had mysteriously caught fire, but he couldn’t, Ross said (it must be suspected with some regret) place the blame on the Sellis’, other than to remark their youngest son had been heard to observe that it was a ‘goodly store of corn’ a while before the incident occurred.
On the same day as Ross was examined, the Sellis’ nine year old son, Henry, was also questioned by the Justice. According to the boy, a spirit had come to his younger brother one night, taking hold of him by the left leg and toe and frightening him greatly, as indeed it might, being, according to the boy, the size of his sister and all in black. Their father had been most angry at their mother for this, demanding, ‘Why, thou whore, cannot you keep your imps from my children?’ Cicely had apparently duly called the creature away and it had left the terrified boy in peace. This was not the only time the ‘imps’ were present; Henry had seen his mother feeding them, and, the boy informed Darcy, they had names – one was called Hercules or John, and the other Mercury. Not only that, Henry had heard his mother tell his father that she had sent one of the spirits to Ross’ maid, on the very day that she had been taken ill.
Henry and Cicely themselves were also questioned that day. Henry denied everything said against both himself and his wife, apart from the death of Ross’ horses when he had been working with them. Cicely likewise did not recall the chasing off of her cattle or arguing with Ross’ wife over either cattle or malt. Both denied having anything to do with any spirits and vowed that the entire incident regarding their son and the spirit grabbing him in the night had not occured. 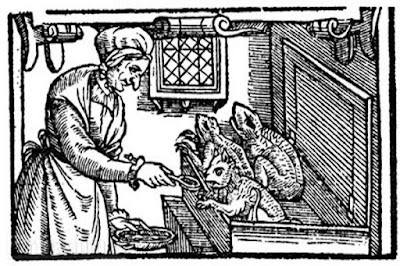 On top of the questioning, Cicely was searched by three ‘women of credit’ chosen by Darcy for the purpose. On her body were found several ‘suspicious’ marks, very like those that had been ‘sucked’ by the supposed familiar spirits owned by Ursula Kemp who was the main suspect in the witch trials so far.
Two days later on 3rdMarch, John Sellis, their younger son who had been so terrified by the spirit, spoke to Darcy. He repeated virtually everything that his older brother had said, but with the additional information that an unidentified man had come to take the spirits away, and that said man had given his mother a penny before doing so.
Others also spoke out against the Sellis family. On 15th March Thomas Death related how two years previous his wife had fallen out with Cicely over the child of George Battell. The child had originally been given into Cicely’s care to nurse, but – for reasons unstated in the evidence given – the child was then taken from Cicely and given instead to Thomas Death’s wife. When Cicely next met Mrs Death she had given vent to her anger on the matter, declaring that she would ‘lose more by the having of it than thou shalt have for the keeping of it.’ Sure enough, within the month, his own child, aged four years old, suddenly fell down ‘dead’ in the yard, and, despite being revived for a short time, eventually died. Pigs of his had also behaved in a strange fashion, in a way that no one could satisfactorily explain. 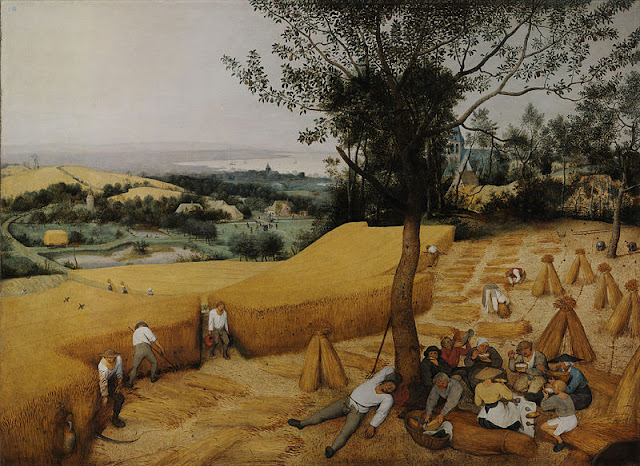 The Harvesters – Pieter Bruegel the Elder

Not only that, but his older daughter Marie had also suffered at the hands of Cicely Sellis. She was taken very ill, and her father was told that in two night’s time those who had caused her bewitchment would appear and would make her well again. Upon returning home he was told by his wife that Marie had claimed Cicely Sellis and another woman had been in the room with her. Marie confirmed this to Darcy, along with giving more details of her strange illness.
Joan Smith, the wife of Robert Smith told of how her young child, formerly healthy and in good spirits, had died shortly after Cicely had commented on it. Interestingly, she would not blame Cicely for what had occurred, only going as far as to say she prayed for God to forgive Cicely if she had been in any way involved.
There was less ‘evidence’ against Cicely than several of the others named and accused in the spiralling panic that had gripped St. Osyth, and the Sellis family had entered the narrative relatively late on in proceedings. That did not keep them from the courts however, and on 29th March 1582, Cicely was indicted for arson along with Alice Manfield, who was also charged with bewitching several people to death.

‘On 1 Sept. 1581 at Little Clacton they feloniously burnt a granary (100 marks) belonging to Richard Ross. On 4th June at Great Clacton Sillis bewitched John son of Thomas Death so that he died the same day.’

Although cleared of the arson charge, Cicely was found guilty on the charge of bewitchment remanded. Interestingly, at the Assizes of 2ndAugust 1582 Henry Sellis was also indicted for the same arson charge, and this time it was stated that the couple and their son Robert had set fire to the barn. All three were cleared of the charge but this was little comfort to them however, as it appears Henry and Cicely Sellis died in prison early in 1583 before they could be released.
References/Further Reading:
Cockburn, Calendar of Assize Records: Essex Indictments Elizabeth I, London, 1978
Gibson, Marion, Early Modern Witches, Routledge, 2000
Rosen, Barbara, Witchcraft in England, 1558-1618, University Massachusetts Press, 1992
W.W, A True and Just Record, of the Information, Examination and Confession of all the Witches, taken at S. Osyth in the county of Essex, London, 1582