Skip to content
While flicking through my old favourite local history tome, The History of Ilkeston by Edwin Trueman, I came across yet another fascinating snippet that had me intrigued enough to go looking for more.
“A body was drowned in the canal near Ilkeston, the means taken to discover it was as follows: a loaf of bread, scooped out and filled with quicksilver, was put into the water and allowed to float down with the current. When it came to the place where the body was, it was expected to stop.”
The source quoted was The Legendary Lore of the Holy Wells of England, by Robert Charles Hope, published in 1893. A quick examination of this text however provided no further information on the case, and so I went further afield. I didn’t find out anything more about the Ilkeston case (though watch this space!) but I did discover several interesting things about the practice.
It turns out the floating loaf, or St. Nicholas as it was sometimes called, was actually a common belief and practice in England in the 18th and 19th centuries, and potentially before. One of the earliest written references to this method of discovering a drowned corpse comes in The Gentleman’s Magazine of April 1767. It involved the tragic occasion of a one year old child who had fallen into the river Kennet in Newbury, Berkshire. A two-penny loaf was split apart and some quicksilver – otherwise known as mercury – was placed inside. According to the report, when the loaf was sent into the water at the location where the child had fallen in, it made its way down the river when, suddenly, it turned and crossed the river before sinking. The location it sank in proved to reveal the body of the poor child. 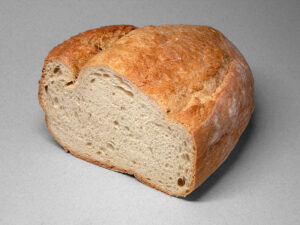 Image from wikimedia commons, user Rainer Zenz
Proceedings of the Dorset Natural History and Antiquarian Field Club, under the heading Dorsetshire Birth, Death and Marriage Customs, refers to the pratice as a “charm or expedient”, that was used in the area during the same century:
“To find the dead body of a person who has been drowned and which has not been recovered from the water the following “charm” or expedient is sometimes adopted. A loaf of bread is procured and a small piece is cut out of the side, forming a cavity, into which a little quicksilver is poured. The piece is then replaced and secured firmly in its original position. The loaf thus prepared is thrown into the river at the spot where the person has fallen in and is expected to float down the stream until it comes to the place where the body has lodged, when it will begin to eddy round and round, thus indicating the sought for spot.”
Notes and Queries likewise mentions several cases across the 19th century, one from the Rev. C. H. Mayo of Long Burton. in 1872, A boy had fallen in the stream at Sherborne and drowned – this time however, the method of locating the body was not successful.
Notes on the folk-lore of the Northern Counties of England and the borders, mentions several cases in Durham. The author had personal experience when he was a boy of people trying to locate corpses in the River Wear in Durham. Friends of Christopher Lumley had tried to find his body with a floating loaf near Lanchester, Durham, and again in 1860 this method was used when a child fell into the Wear on 21st October of that year. The loaf was not successful however, though thankfully the child’s body was later discovered.
Another intriguing method of locating a drowned body mentioned in this text was as follows:
“If a gun be fired over a dead body lying at the bittom of the sea or river, the concussion will break the gall bladder and cause the body to float.”
An eye witness to this had informed the author that it had taken place twice that he had seen, but there had been no success.
American Notes and Queries, July 1890, mentions that in “the last century” in England quicksilver in bread was used to locate a drowned body, and cites a case “vouched by credible witnesses” that the body of a boy had been successfully found in the Thames at Eton. The same source also states that in Ireland a wisp of straw attached to a strip of parchment was used to achieve the same aim, the parchment inscribed with cabalistic symbols.
In the October 1898 volume of The Scottish Antiquary, it mentions how the practice was still in use in some areas of England, with the added details that the loaf used should be stale and that, when in the location of the body, it would stop and then spin round in place.
There are references to the practice too in literature, the most well-known being Mark Twain’s Adventures of Huckleberry Finn, where it is used in Missouri, USA.
Locating a drowned corpse in such a fasion was therefore clearly popular in both belief and practice in England, America and Ireand throughout the 18th and 19th centuries. It seems that success was varied, but belief continued regardless to the end of the 19th century and perhaps beyond.
Have you come across a case of this being carried out, or a variation on the belief that a loaf of bread filled with quicksilver could find a drowned body? If you have, I would love to hear about it!

1 thought on “The Floating Loaf: Discovering the Drowned”