Skip to content
Situated on Castle Rock, Nottingham Castle rests an impressive one hundred and thirty feet above the city. Although very little of the original castle exists today, the series of caves and tunnels that run through the cliffs continue to draw visitors and investigation, with over four hundred known caves currently documented and catalogued. 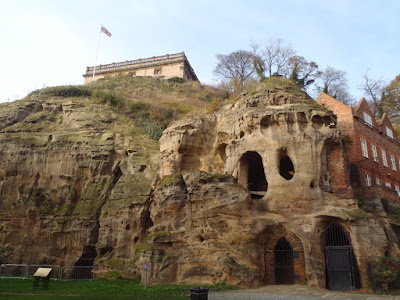 One of these, known as Mortimer’s Hole or Tunnel, has a particularly fascinating legend attached to it. The story is related in Links with Old Nottingham: Historical Notes by J Holland Walker, in 1928:
“In 1330, Roger Mortimer and Queen Isabella took refuge in Nottingham Castle, where they lived together flaunting all decorum and allocating to themselves regal powers to which they had no right.
Such a state of affairs could not be permitted to continue, and so the young King Edward III. headed a band of his faithful nobles and by means of a secret passage to the Castle succeeded in surprising the usurping pair, arresting Mortimer and leading him off to execution and dispatching Queen Isabella to an open and honourable imprisonment at Castle Rising in Norfolk.” 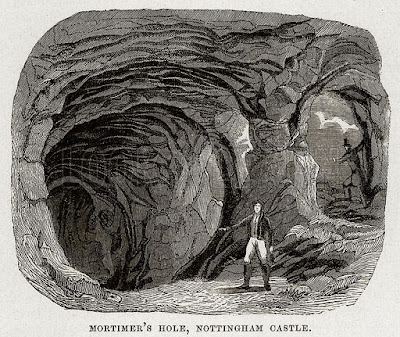 The tunnel, over one hundred metres long, stretches from Brewhouse Yard up into the castle grounds. It is not possible to travel the full length along it, but it is clear that there were once six gates, with steps cut into the rock. There is also evidence of use by cannon in the Civil War. It would have provided a useful method of communication from the Castle down into what was then called the Rock Yard, and also for getting supplies to the castle from the River Leen.
As to be expected with such a history, there are many intriguing tales about Mortimer’s Hole. One of the most prevalent is that the ghost of Roger Mortimer himself haunts the tunnel. In 1921, tales of a ghostly presence in the area around Standard Hill so terrified inhabitants there that they would not venture from their houses after nightfall. One man, however, decided to see what was going on; setting himself on watch in the tunnel he waited, until he was finally rewarded with the sound of footsteps coming up from the basement, accompanied by the noise of rustling paper. There was no confrontation, however, as when he called out to the presence, the footsteps retreated once more. This account led to a great influx of tourists, each determined to see the ghost for themselves, and there are many who believe that the ghost of Mortimer remains there to this day.

Showing the tunnel from the Castle down to Brewhouse Yard
Trent & Peak Archaeology/University of Nottingham
There is also a tradition that a room where Isabella and Mortimer met for their assignations can be found at the back of the pub, Ye Olde Trip to Jerusalem which claims, along with many others, to be the oldest in England. Among other ghostly experiences, in the 1940s, it is said that a group of American soldiers were walking past the Inn when they were startled to hear a woman screaming in a foreign language. It has been suggested that it might have been the ghost of the French Isabella, shrieking for mercy for her doomed lover.
It had long been suggested that this was not the actual tunnel used by Edward III at all, and that the tunnel named Mortimer’s Hole was actually a service tunnel or such leading up from the River. There has been speculation over various possibilities, but in 2010 the “real” Mortimer’s Tunnel was discovered to have been what is known as the North-Western Passage. This runs from the house of Castle Grove in the Park Estate (private property) and stretches 30-40 metres. The two year long Caves Survey used laser scanning to record 3D records of Nottingham’s sandstone caves. 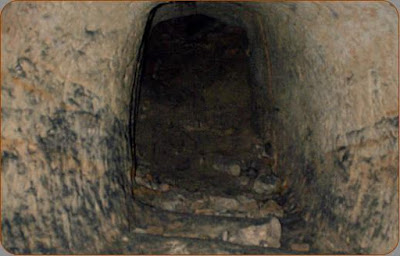 The “Real” Mortimer’s Hole, looking up towards the castle.
Cave Tours run from Nottingham Castle on a regular basis, and with the Castle also housing the city Museum and Art Gallery, it is well worth a visit, ghosts or no!