Skip to content
Tales of bells that have been lost to the sea are a familiar occurrence in many legends, especially those that take place around Britain’s coastline. Whether lost by bad weather, bad luck, or punishment for a rash word spoken in anger, here are a selection of Britain’s drowned bells. 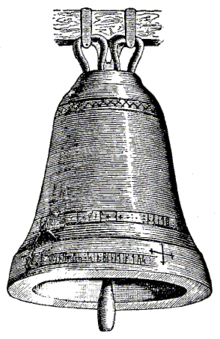 The Legend of Kilgrimol:
This tale is located at Lytham St Anne’s near Blackpool in Lancashire. Not far from the shore it is said that a church and its churchyard lie submerged beneath the waves. Known as Kilgrimol, there have been several explanations for what happened to the ill-fated church. Walter Thornber in his History of Blackpool and it’s Neighbourhood states that an earthquake caused the disaster, whereas other sources report a violent storm as the cause of the disappearance.

This story is founded on a degree of fact, and according to a 17th century source there was indeed a church at Kilgrimol since the 7th or 8thcenturies:
“In the days before the missionaries came there were evil spirits in the water marshes around Marton Mere, who were propitiated by the Britons. When Grim, the priest from Kilgrimol, came teaching the people, he cast the chief spirits into the mere and it took the form of a great worm or conga eel.”
There are several places that contend for the location of Kilgrimol, some of which are out to sea, but one of which is at Cross Slack, now part of the St Anne’s Old Links Golf Course. Interestingly, it seems that in the mid-1500s an event occurred that hit the West Coast and destroyed twelve villages in total; in some sources, the destruction of Kilgrimol is dated to this time.

Kilgrimol is remembered in many local place names today, and it is said that during a storm or on New Year’s Eve the bells of the ill-fated church can be heard tolling. 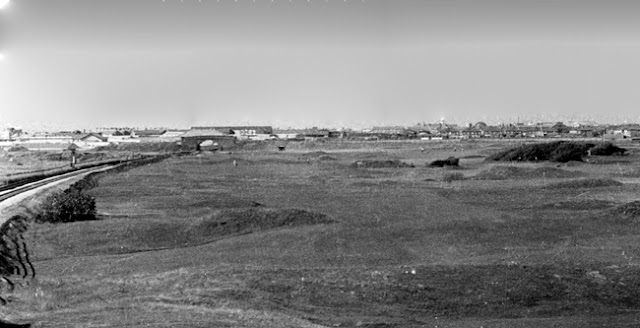 Cross Slack
The Bells of Boscastle:
As legend goes, the people of Boscastle, Cornwall, had long been unhappy with the fact that their church was lacking in bells. This fact was made all the more sore by the delightful peal from nearby Tintagel that could regularly be heard, and over time, funds were raised so that they could purchase their own.  It took a while, but there was much satisfaction when the total needed was reached and the bells duly purchased.
The new acquisitions were being delivered by sea and the man navigating the ship happened to be from Tintagel. At the sound of the bells from his own church the man, deeply religious, crossed himself and thanked God – at that an argument broke out with the captain who was of the opinion that the ship and the sea she sailed on should be thanked instead for the safe voyage. Many heated words were uttered by the captain along with much blaspheming; as if in answer a fierce storm rose up that sent the ship onto the rocks, killing all on board apart from the man who had demanded God be given his due.
The bells were ringing as the ship went down, and it is said that they can still be heard before a storm even today.
The church featured in the story is St. Symphorian’s Church at Forrabury, positioned high on a hill overlooking the sea. A version of the story of the missing bells is told in the poem The Silent Tower of Bottreaux.
The pilot heard his native bells
hang on the breeze in fitful swells.
‘Thank God’ with reverent brow he cried,
‘We make the shore on evening’s tide.’
‘Come to thy God in time.’
It was his marriage chime.
Youth, manhood, old age past,
his bells must ring at last.
‘Thank God, thou whining knave, on land
but thank at sea the steersman’s hand’,
the captain’s voice above the gale,
‘Thank the good ship and ready sail.’
‘Come to thy God in time.’
Sad grew the boding chime.
‘Come to thy God at last.’
Boomed on the heavy blast.
Up rose the sea as if it heard
the Mighty Master’s signal word.
What thrills the captain’s whitening lip?
The death groans of his sinking ship.
‘Come to thy God in time.’
Swung deep the funeral chime.
Grace, mercy, kindness past,
‘Come to thy God at last.’
Long did the rescued pilot tell,
when greying hairs o’er his forehead fell,
while those around would hear and weep,
that fearful judgement of the deep.
‘Come to thy God in time.’
Swung the deep funeral chime,
he read his native chime,
youth, manhood, old age past,
his bell rung out at last.
Still when the storm of Bottreau’s waves
is wakening in his weedy caves,
those bells that sudden surges hide
peal their deep notes beneath the tide.
‘Come to thy God in time.’
Thus saith the ocean’s chime.
‘Storm, billow, whirlwind past,
come to thy God at last. 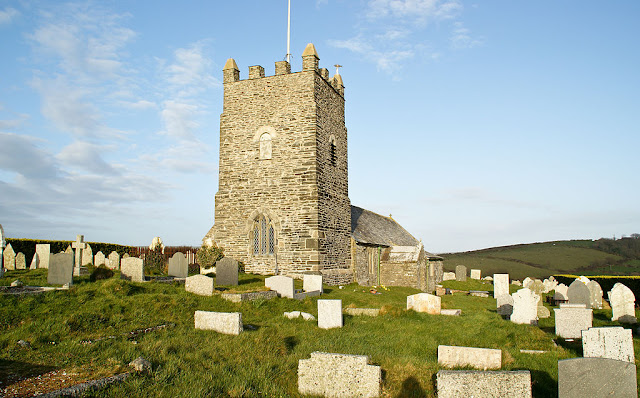 “Forrabury church Bocastle by Herbythyme
Licensed under GFDL via Commons
Bells for Sale:
There is a legend that speaks of how all the church bells in Jersey were once sold to the French. The dreadful act was punished when the ship sank in St. Ouen’s Bay, taking all the bells with it. At least into the 19th Century the sound of those bells were said to be heard, a bad omen that told fishermen to stay ashore as a storm was coming and lives would be lost.
There are suggestions that there is some grounding in fact for the story. Sir Henry Spelman, in his 1632 The History and Fate of Sacrilige devotes a section to the fate of the many church bells that were deemed surplus to requirements as Mary Tudor’s reign gave way to that of the Protestant Elizabeth. There were many tales regarding the pulling down and sale of these bells, and it is from this time that the legend of the Jersey bells seems to stem.
“At the end of Queen Mary’s days (Calais being taken) Sir Hugh Paulet pulled down the bells of the churches of Jersey; and sending them to St Malo’s, in Bretagne, fourteen of them were drowned at the entrance of that harbour. Whereupon it is a by word at this day in these parts, when any strong east wind bloweth there, to say “The bells of Jersey now ring.”
The tale of the bells was in fact used to explain a booming noise made by a combination of the wind and the sea, and it was said that drowned sailors knew of their approaching death as they heard the bells ringing beforehand.

St Ouen’s Bay, Jersey
A Viking Raid:
A tale from the south coast relates how the monastery at Bosham, West Sussex, was attacked by Vikings. The much-prized tenor bell was carried off but the monks did not give chase; as soon as the invaders were gone they rang the remaining bells, the sound carrying out to sea. The stolen bell added its own note to the peal, the sound so strong and true that it caused the planks of the ship to break and both the ship and the bell were lost to the sea.
There are two variations of the story, one where all aboard were lost, the other more positive outcome being the conversion of the raiders to Christianity.
Incidentally, this isn’t Bosham’s only claim to fame; it is also one place of several believed to have been the place where King Canute held back the tide. 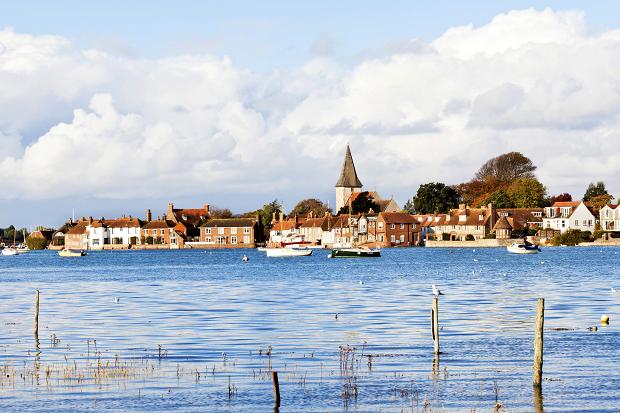