Skip to content
As usual, when researching something else entirely, I came across this fascinating item – a witch bottle. 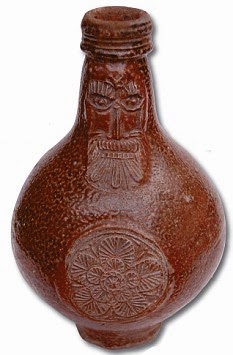 Used as a form of counter magic, they were believed to release the owner from the power of the witch who had “overlooked” them, and were most popular during the 16th and 17thCenturies.
Made of stoneware or glass, a witch bottle would be made up by another witch, or a cunning man or woman consulted for the purpose. The contents varied; liquid (often the urine of the bewitched person), nails, bent pins, hair and nail clippings, herbs and even navel fluff have are among the items documented in recent finds. The Navenby witch bottle contained pins, hair and a leather strap. 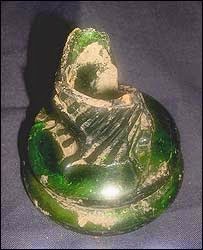 Witch bottles worked on the principal of sympathetic magic. The belief was that the nails and bent pins would aggravate the witch when she passed water, causing her such pain and distraction that she would break the spell.
Another variation involved the disposal of the bottle; the bottle was to be cast into the fire, the witch’s hold broken when the bottle exploded, perhaps even leaving her dead in the process.
It was very important that a bottle not be disturbed if it was to perform its function. Accordingly, they were hidden beneath floors or hearths, up chimneys or plastered into walls to avoid detection.
In Purbeck, Dorset, a bottle was discovered under a stone boundary wall. This was believed to be warding off spirits and disease that would target the cattle in the field there. 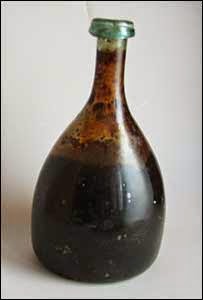 Purbeck Witch Bottle, containing a
mix of saltwater, nicotine and decayed animal fat.
Not satisfied with the traditional stoneware or glass, John Hepworth of Bradford, decided to try his luck with iron bottles. In May 1804 he achieved notoriety when his experimental bottle exploded, killing the person who had come to consult him in the process.
Although their popularity diminished over the following centuries, witch bottles have seen a revival and are still in use today. The intention is somewhat different, the focus on capturing negative energies aimed at the creator of the bottle, rather than to cause harm or pain. The contents, however, are much the same today. X-ray showing contents of a Witch Bottle found at Greenwich