Skip to content
Today we take a hop across to the Channel Islands to visit the famous fairy ring at Pleinmont, Guernsey.
This fascinating feature consists of a circular ditch surrounding a flat grassy area in the middle, the whole contained by a ring of stones. Located at Pezeriez Point, the south-western tip of the Island, it is the furthest point away from the capital, St Peter Port. 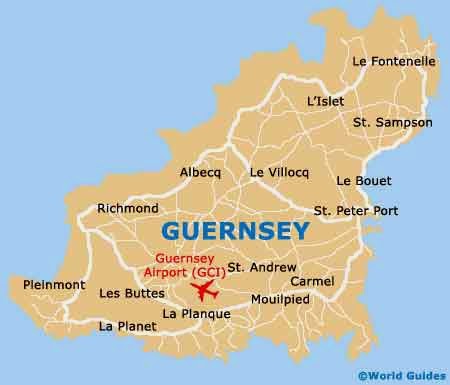 According to legend, if you make a wish whilst walking around the ring three times, the fairies will grant your request. Fairies are also rumoured to have danced around the ring in ancient times, and although I’ve not found any reported cases of wishes coming true, it is a beautiful spot and a pleasant walk enjoyed by many on a late summer evening. 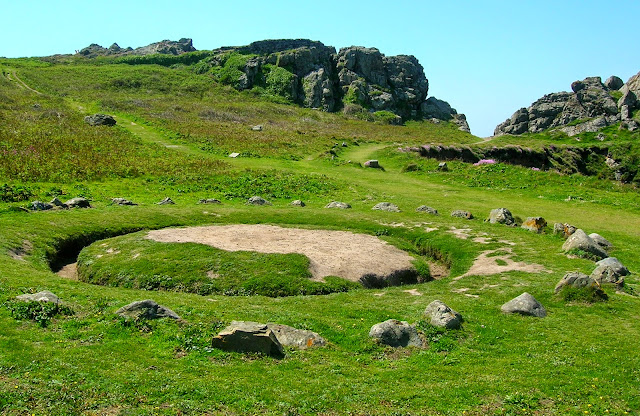 When the fairy association started in unknown, but the more earthly function of the ring is equally fascinating.
The ring’s proper name is La Table des Pions, loosely translated as footman’s table, or table of the pawns. This name and indeed the original purpose of the ring, originates from the The Chevauchee or Chevaucherie, a procession that took place around the island to assess the condition of the Chemin du Roi (King’s Way). 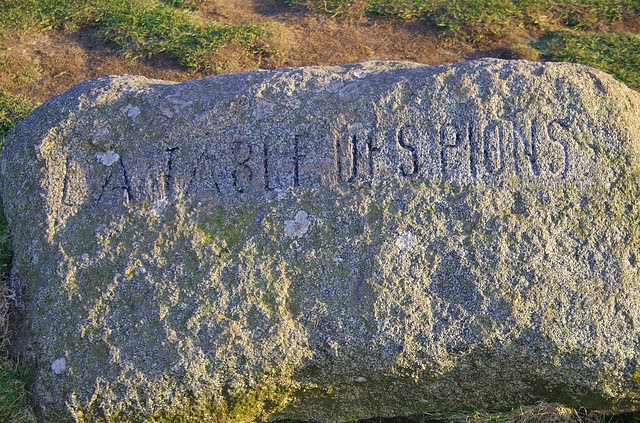 From the year 1264, Corpus Christi (or day de Fete Dieu as it was known in Guernsey) was celebrated yearly, and in accordance with this, the Abbot of St Michel du Valle processed around the island with the holy sacrament. Several days beforehand, officials would travel the route he was to take, making sure the roads were in a good state of repair and that there were no obstructions, levelling fines against those in the areas that failed to meet the required standards. Although the date the procession was named is unclear, The Chauvachee is mentioned in an act of the Court of St Michel du Valle dated 2ndApril, 1533, where it is ordained that:
“The King’s Serjeant should cry in the market place for three Saturdays that the Chevauchee would take place in the following month of May.”
Mention is again made in 16th May, 1573 when:
“It is ordered that a round table furnished with a table cloth and with bread and wine, shall be laid out opposite the western gate of the Church of St Peter Port,” (a place the procession was due to pass.)
The custom was, at some point after this, discontinued, but the Chevauchee was revived again in June 1813, with another Chevauchee taking place on 8thJune, 1825. Although it may have caused grumbling in official channels, there was a great holiday feel to the day, with the roads packed with people dressed in their best, turned out to see the procession and join in the merrymaking.
But what of our fairy circle? Because the procession took most of the day, (those obliged to participate were to meet at the Court of St Michael at 7am, with penalties for anyone who was late or defaulted) there were frequent stops along the route. One of these took place at the Chateau des Pezeries at Pleinmont, where a large tent was erected and the whole party rested for a while. Only the officials were permitted to partake of the cold meat and wines served in the marquee, however; their footmen, the Pions, were instead seated on the grass, the hollowed out circle of the Table des Pions being created for that purpose. 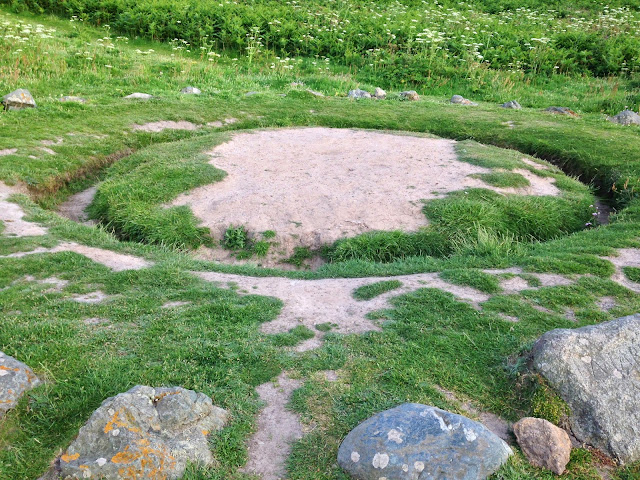 During the 1825 Chevauchee,the procession halted there until 4pm. Many carriages arrived during that time, and a great deal of dancing and carousing went on until the procession moved on to the next location, finally disbanding around 7pm with further feasting and celebrations.
The Pions who used the table, said to be carefully selected for their looks, had the privilege of being allowed to kiss any woman they met during the procession. However, for the sake of propriety, it was stated that only one Pion could kiss any one lady, a policy that was strictly adhered to.
The Pion’s dress was also highly regulated, and we have a fascinating glimpse of their costume from records planning the Chevauchee for 8th June 1768. It was decreed that the Pions were, on this occasion, to wear ruffled shirts with wristbands of black ribbon, and a matching ribbon to fasten at the neck. With this went black breeches, tied at the knees with red ribbons, and white stockings. Black caps with a red ribbon at the back and red rosettes on their wands were to finish the somewhat dashing ensemble.
Nearly half a decade later in 1813, we find several alterations to reflect the change in fashions; the caps remained the same, but now they were worn with white shirts, circular white waistcoats with a red ribbon border and white cravats or neckerchiefs. The breeches were likewise white this time, and long, though the ribbons at the knees were again red, and the white stockings and red rosettes on the wands remain unchanged.
The last recorded Chevauchee took place on 31st May 1837. A re-enactment of the old Chevauchee procession took place in 1966, however, to celebrate the 900th Anniversary of the Norman Conquest. 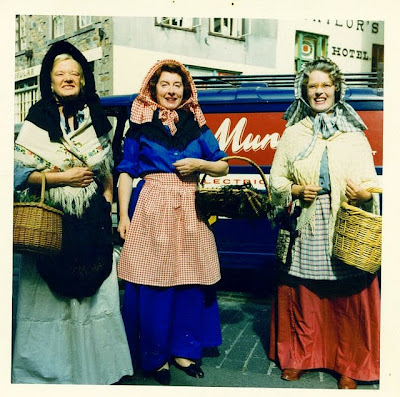