Skip to content
In the caves of Wookey Hole, Somerset, rests a witch. She was, as legend goes, turned to stone, many, many years ago, and has remained there ever since, trapped in the glittering limestone caves carved out by the River Axe. 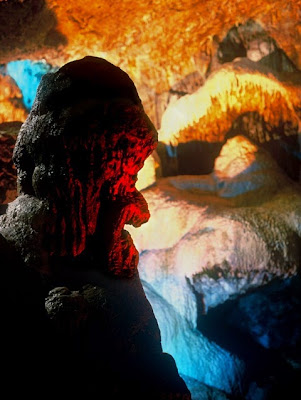 As with most tales, the details vary in the telling, but the basic legend asserts that there was once a witch who tormented the local villagers of Wookey Hole. She worried their cattle, spoilt their butter, and generally made a nuisance of herself, striking terror into the hearts of those she lived amongst. This unnamed witch had an especial hatred towards young lovers, and delighted in using her powers to destroy any fledgling relationship that came to her attention. One young man, his love affair in tatters, was so affected by the experience that he swore never to love again, taking, in his desolation, Holy Orders and dedicating his life to the Church.

After years of such treatment, the villagers appealed for help against the terrible woman who plagued them. As chance would have it, the Abbot of Glastonbury sent a Father Bernard to their aid, the self-same monk who had take the cloth so long before when the Witch foiled his own plans of romance.
Prepared and with the support of the people of Wookey behind him, Father Bernard pursued the Witch to the caves, following her into the darkness as she fled before him. There they did battle, and eventually Father Bernard triumphed, the Witch’s ill-gained magic no match against his prayers and chants. With an incantation and the wave of his hand, the Witch turned to stone, petrified into the shape that has drawn visitors ever since. 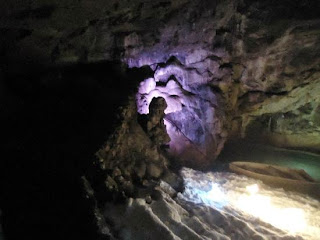 The Witch at a distance
Other variations add that the Witch was once crossed in love herself; discovering her lover to have been unfaithful she retreated, heartbroken, to the cave, whereupon she called upon the Devil to help her. Promising her soul in exchange for his assistance, she accepted the deal, and was given her magical powers in return. Not satisfied with cursing her perfidious lover, she continued to upset relationships throughout the area, until the brave monk stopped her once and for all. Some tellings also have the monk sprinkling the Witch with Holy Water at the crucial moment, further highlighting the triumph of good over evil.
Although there is evidence that the caves have been in human use for 45,000 years, and apparent reference to the caves is found in writings from Clement of Alexandria in 3AD, the stalagmite formation now known as the Witch is first mentioned by William of Worcester in 1470 where he suggests that it may be described as “the figure of a woman, clad and holding in her girdle a spinning distaff.” The first recorded naming of the Witch herself, however, was a poem by Dr Henry Harrington, The Duke of York’s physician, published in 1756, where we are told:


In anciente days tradition showes,
A base and wicked elf arose,
The Witch of Wokey hight.

There are various mentions of the Witch of Wookey throughout the years that followed, ranging from the Reverend Shaw’s 1788 dismissal of the legend as “silly tales”, to his fellow clergyman, Richard Warner’s reporting as fact their cave tour guide’s assertion that:

“The cavern had never had but one inmate, an old witch who had been turned years ago into stone, by a parson, as she was cooking a child, which she had stolen from the village.”
He then went on to record that the guide’s own grandmother had memories of the Witch, along with the acts of maleficium she visited upon the unfortunate villagers. 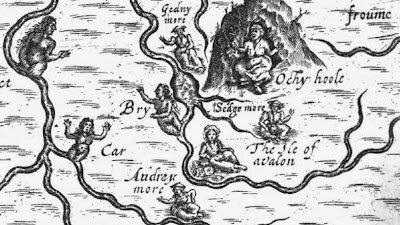 Illustration from Drayton’s Polyolbion 1612
showing the “Witch” of Ochy Hole outside her cave.
Hebert Balch, the pioneering archaeologist who, between 1904 and 1954, led extensive explorations into the cave system at Wookey, believed that the witch actually existed. In his 1912 expedition a skeleton of a goatherd was discovered, along with the remains of two goats, a milking pot, a knife described as sacrificial in nature, and a round stalagmite ball. He suggested that these were the actual very real remains of the woman who inspired the legend so many years before. 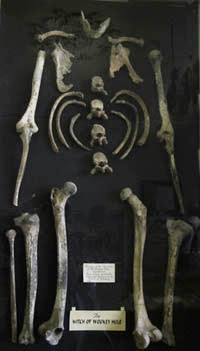 The Witch of Wookey Hole
Now at Wells and Mendip Museum
Balch went on to link the story of the Witch to folk memories of events that actually took place prior to an evacuation of the cave around the start of the 5th Century. He referenced the story of Yspadaddon Penkawr, chief of the giants whom it was foretold would die when his daughter married, an event he worked to prevent  at all costs. Kulhwch, either a cousin or friend of the mythical King Arthur, vowed to win her hand however, and was set a series of impossible tasks to carry out. Despite expectations he completed all apart from the final task, to bring back the blood of the black witch who lived “in the cave at the head of the Stream of Sorrow on the Confines of Hell”. When several of Kulhwch’s men had been driven back without success, Arthur himself stepped in to help his desperate friend. He went to the cave, where he slayed the witch, cutting her into parts with his dagger.
Balch also discovered a socket had been made in the Witch’s chest, and the remains of a wooden stake were found on the floor beneath. He speculated that this could be evidence of a monument to a real sacrifice, carried out to an Underworld deity, citing the presence of human bones nearby that had been broken in the same manner as animal bones for eating.
Eschewing the more familiar companion of a cat, there is even evidence of the witch’s dog. A little “bowl” has been uncovered at its side, and bones discovered in the dirt around the figure. It has been suggested that it was tradition at some point in the caves’ long history to bring bones for the dog, in order to appease his mistress. 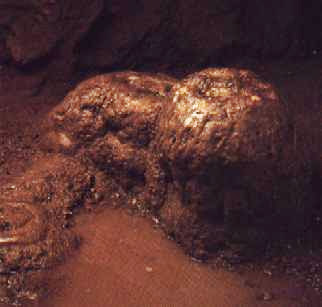 The Witch’s Dog
The Reverend Thomas Scott Holmes however had another explanation for the Witch.  In his 1886 The History of the Parish and Manor of Wookey,  He postulated that the “witch” or “wych” actually refers to the cave itself, and described the cavern from which the Rive Axe flows. He suggested that “Wookey” came from “wocob” or “wocor”, words that are linked to the Welsh “gogof” or “ogo” that mean cave.
Interest in her legend and the caves where she makes her home has not diminished, as illustrated by the fact that the Witch of Wookey is once again in human form during daylight hours at least. She now welcomes visitors to the ever-popular cave attractions, including the recently opened Witch’s Laboratory. 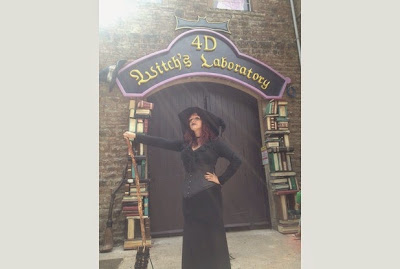