Skip to content
Among many things, I am a collector of quotes. Whether long, short, amusing, or inspiring, if it catches my interest, down it goes. It was with glee therefore that I reached for my pen at the following chilling pronouncement by historian Edwin Trueman in his 1899 History of Ilkeston. After waxing lyrical on the perils faced by early man and the likely prospect of being eaten by various very corporeal beasts, he goes on to declare with relish:
“You might catch dozens of wolves and foxes in snares, and so thin their numbers, but you could not snare spectral dogs, or if you could, you would not know what to do with the ghastly creatures when you had caught them and their blood-curdling baying would haunt your dreams for the rest of your days, as indeed it did already.”
Who would not feel a thrill of terror at such carefully crafted words? Whether a real concern of the earlier inhabitants of the Derbyshire village or a late Victorian fantasy, the problem of spectral hounds was not peculiar to Derbyshire. From Black Shuck to Cerberus guarding the gates of the Underworld, dogs, especially of the large and black variety, have pervaded folklore and the popular imagination since records began. 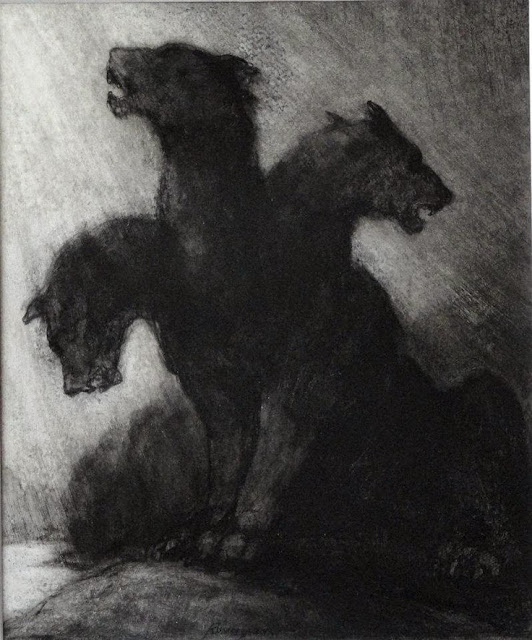 A dog is, after all, a common animal to be seen out and about in any age, especially after the disappearance of Trueman’s aforementioned wolves (and the predatory hyenas cited in another chapter by the somewhat fanciful historian). Spotted unexpectedly, in the darkness of a field or a country lane, an animal that is usually familiar easily becomes a terrifying beast. It is then only a matter of time before other encounters are explained in the same way, the initial judgement forming the framework for others to interpret their own unexplained experiences. With a few embellishments added along the way, it takes very little for a legend to form and grow, evolving all the while.

We are no stranger to black dogs here at The Witch, The Weird and The Wonderful; Robert Fabian encountered one in his quest for Charles Walton’s killer, while Agnes Waterhouse was accused of, among other things, sending a demon in the guise of a black dog to terrorize a young neighbour. In coastal areas, such sightings are often interpreted as forecasting bad weather, seen by many before a storm brews. Spectral dogs are also often found at boundaries, whether between estates, counties or worlds.

I remember, incidentally, a rumour that such an apparition haunted a lane near a pub my parents frequented; needless to say, every Sunday afternoon when we drove past on the way home I made certain to look the other way! A few years later I found myself walking down that very lane; it was certainly on the eerie side, but if there were a ghost dog around, it did not feel like showing itself. 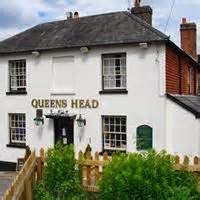 It would be fascinating to discover which of the following manifestations influenced Trueman’s thoughts on the subject, as if he himself ever encountered a ghost hound he refrained from sharing it with his readers.

The Beast of Bungay:
The church of St Mary’s, Bungay in Suffolk,was the scene for one of the most oft repeated black dog sightings. During a service on 4th August, 1577, it is recorded that a massive black beast entered the church, slaying parishioners as they prayed. The incident occurred during a violent electrical storm, during which the tower was struck, cracking the clock and killing two bell-ringers.  The black dog is now part of the town’s coat of arms and the event recorded in verse. 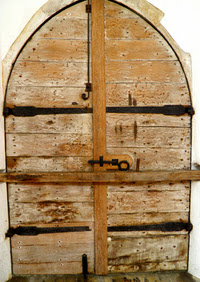 “Claw marks” on the door of
Bungay Church, Suffolk

Black Shuck:
Probably the most well-known of the ghostly canines roaming the British countryside, “Shuck” is sometimes given as a catchall name for such dog sightings. Shuck himself is said to wander through East Anglia, startling the unwary with his glowing, saucer-like eyes and sometimes headless appearance. Shuck is generally seen as a malevolent entity, often taken as a premonition of death. 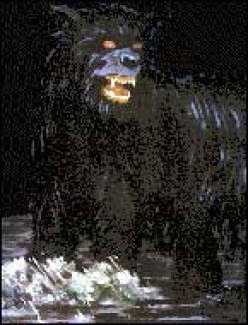 Padfoot or Padifoot:
The Yorkshire-based Padfoot is a shapeshifting beast who most often takes the form of a dog. This variation is described as being donkey-sized, and, like Shuck, linked with an impending death. Although usually black, a white variant has also been cited. Padfoot is also sometimes invisible, only the sound of his footsteps to alert a traveller that they are not alone.
Moddey Dhoo/Mauthe Doog:
Moddey Dhoo has been sighted in several locations on the Isle of Man.  First reported as a large black spaniel by George Waldren in his History and Description of the Isle of Man in 1731, the dog was reputed to haunt Peel Castle. Although causing fear when seen elsewhere around the island, especially when in his headless state, at the castle itself he grew to be such a frequent sight that those who worked there soon grew used to his presence.

Cu Sith:
Found in Scotland and the Hebrides, Cu Sith has the appearance of a wolf, and is particularly menacing. Often silent, when he does bark it is three times; those hearing must then run for safety before the third bark, or else die of sheer terror. The barks were also seen as a warning system for nursing women, alerting them to hide away before they were taken to feed the young of the fae. This ghostly creature is reported to be dark green rather than the usual black. 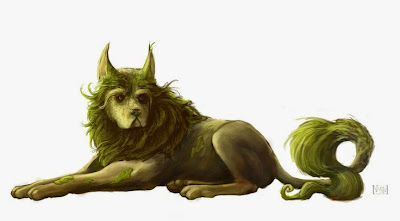 Not all black dog sightings are harbingers of doom.The Gurt Dog of Somerset is seen as benign, although usually large and shaggy and with the same red eyes associated with the less friendly Black Shuck. The Gurt Dog is known for helping travellers on their way home and is also said to protect children on the moors. 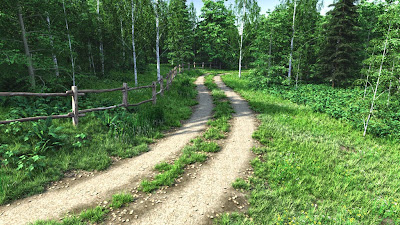 Although there is no shortage black dog tales across the UK, Middlesex and Rutland are, as of yet, without their own spectral hound. Who knows, perhaps the first sighting is just around the corner?