Skip to content
Research is a wonderful thing. Since starting reading for my current novel, I have come across many fascinating characters and objects, the pile of notes and references accumulating at almost the same speed as I’m writing the book. Most of them won’t have anything to do with the finished story, but instead of letting all those scribblings go to waste, from time to time, I’ll be sharing what I’ve found here in the library.
Having previously lived in Yorkshire for the best part of six years, a name that was instantly familiar was that of 16th Century cunning woman and prophetess, Ursula Shipton.

She was, according to legend, born as Ursula Southill in a cave in Knaresborough, North Yorkshire. Her dates are given as circa 1488-1561, though there is debate over whether she actually existed at all. Ursula’s mother, Agatha, was apparently seduced by the Devil, and Ursula was said to have been the result of that union. (It would be interesting as a side project to find out just how many others were credited with that paternal line!)
Many strange tales surround her younger years, the most bizarre and oft repeated being an incident where baby and basket vanished for several hours, only to reappear safe and well up a chimney. Early on she established a reputation for foresight, and speaking of the future, skills that, in those days, went hand in hand with accusations of witchcraft.
She was, by all accounts, a very ugly child, her appearance little improving as she grew older. That did not hold her back however, and at the age of twenty-four she married Toby Shipton, a carpenter.. Sources differ on the happiness of this union, but the couple made a home in Knaresborough, and here she began in earnest the prophecies that were to make her name. Mother Shipton is said to have successfully prophesied, among other things, the Dissolution of the Monasteries, the reign of Elizabeth the First and The Great Fire of London. She also developed a reputation for solving issues of lost property, and people came from far and wide to hear her pronouncements.
The first publication of prophecies attributed to Mother Shipton was in 1641, many years after her death. An account of her life was published in 1684, and these combined to create the body of information we have regarding her today. One of the most famous prophecies attributed to her was that concerning the end of the world in 1881. People were so fearful that they left their houses and retreated to the local churches or hid in the fields. Needless to say, the end never came, but that does not seem to have dampened enthusiasm for Mother Shipton’s powers of prophecy, and there are some still waiting for the end she predicted today. 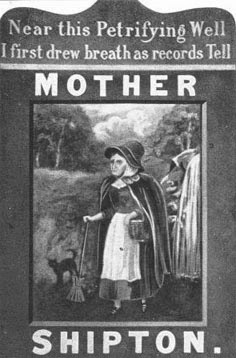 She is also associated with the Petrifying Well situated close to the cave where she was supposedly born. People feared to go there in case they were themselves petrified; today, you can still see the waters work their magic, as seven hundred gallons flow over the well every hour, slowly turning objects thrown there into stone.
Mother Shipton died at the ripe old age of seventy-three, but her legend lived on, with her prophecies printed in many editions throughout the 18thand 19thcenturies. Over this time many new pronouncements were added to the original sayings, and she has been credited in recent years with foretelling the advent of flight, the two World Wars, and possibly even the invention of the television.
Did Ursula Shipton exist? Perhaps a woman by that name did indeed live in Knaresborough at that time, though whether she was truly the daughter of the Devil is clearly up for dispute. One thing that cannot be denied however is that her story and the words attributed to her have captured the imagination of many from her own days until the present time, and are still going strong today. 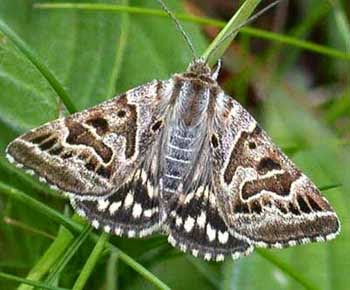 The Mother Shipton Moth.
So-called because of the crone-shaped markings on the wings.
Through towering hills proud men shall ride
No horse or ass move by his side.
Beneath the water, men shall walk
Shall ride, shall sleep, shall even talk.
And in the air men shall be seen
In white and black and even green.