Skip to content
There are very few books that would have me up until gone midnight, huddled in the cramped bathroom of a London Travel lodge. Savage Magic by Lloyd Shepherd, however, is one of them.
[NB I’m not weird – the other half was out gathering beer to review for his blog, the kids were asleep and you have to snatch these opportunities with both hands.] 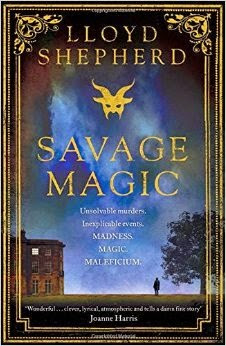 This is the first review here at The Witch, The Weird, and The Wonderful, and there is not a better book to set the standard than Shepherd’s tale of madness, magic and maleficium. The year is 1814, and Charles Horton, a water constable with the Wapping River Police, is left distraught when his beloved wife, Abigail, leaves him to voluntarily become a patient at Brook House, home for the deranged. His worries are only just beginning however, when he is contacted by top London magistrate, Aaron Graham. There are strange things going on at Thorpe Lee House in the Surrey village of Thorpe, and Horton is charged with getting to the bottom of these mysterious circumstances.
Elizabeth Hook, the cook at Thorpe Lee House, has been dismissed, suspected of using witchcraft to harm the household, including Graham’s estranged wife and daughter. Is she to blame, or are there more sinister forces at work? As Horton throws himself into dealing with the less than welcoming inhabitants, at Brook House, Abigail finds herself drawn to a mysterious and disturbed young woman, Maria, who appears to be in possession of strange abilities. The urgency increases when a series of gruesome and unexplained deaths leave Aaron Graham baffled and in a race against time as, all the while, a dark presence can be felt closing in on all concerned. What binds together the aristocratic members of a club called the Sybarites, the women in Brook House and the household at Thorpe Lee House? And, more importantly, will Charles Horton manage to figure things out in time? 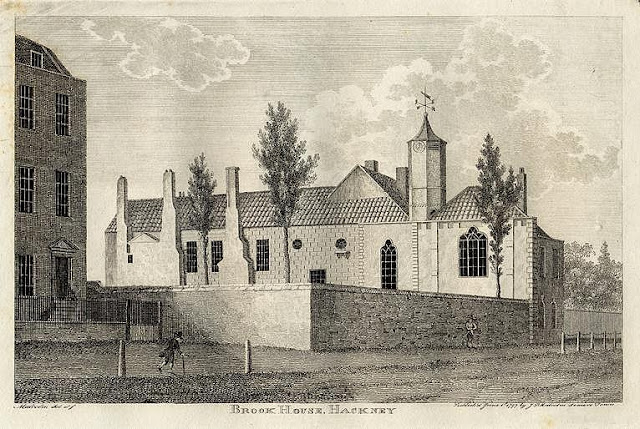 Brook House was a real house for the deranged, pictured here in 1800.
It was during a late-night browse that I came across Shepherd’s page and instantly fell in love. With a book cover. My husband can vouch for that – he very indulgently looked as I waved the laptop in front of him and declared that  the cover of Savage Magic was the most beautiful cover I had ever seen in my life. Add the fact that the book promised magic, mystery and witchcraft and I was guaranteed to buy it. I don’t tend to buy on impulse, but on this occasion, I was most definitely not disappointed.
One thing that particularly leaps out about Shepherd’s style is that it is so easy to read. Crisp, clean sentences conjure up the characters and their world effortlessly, and the only complaint I have is that once I picked the book up, it was incredibly hard to put it down! The colourful cast of characters is best left for the reader to discover, but this review wouldn’t be complete without giving one a particular mention. Abigail Horton is one of those all-too-are female characters that are interesting in their own right. Her personality can be felt from the first moment we see her, her strength of character coming through loud and clear. She’s intelligent, confident and witty without the fact being rammed down the reader’s throat, and, most of all, she comes across as being real.
Savage Magic is a well-written, vibrantly populated page-turner, but now to the nitty-gritty: does the magic element pass muster? I’m the first to admit to being picky when it comes to fiction dealing with a subject area close to my heart, and nothing could be closer than tales of magic and witchcraft. Savage Magic escapes the pitfalls that so many other novels fall into, however, and it is clear that Shepherd has done his research. There was no point where the story jars or throws the reader out, the careful blending of fact and fiction seamless, entertaining, and highly satisfying. 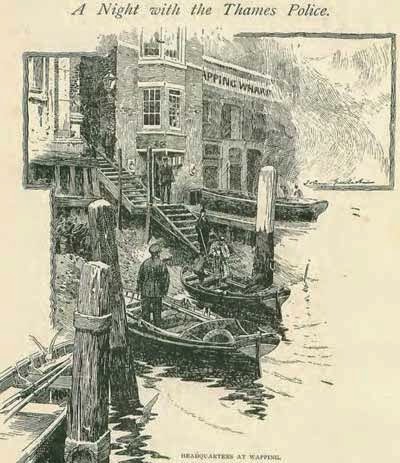 River Police Headquarters at Wapping, 1891
If it wasn’t already obvious, I would highly recommend Savage Magic, and it is on my re-read list – after Shepherd’s first two novels, The English Monster and The Poisoned Island of course.  Check out Lloyd Shepherd on Twitter at @lloydshep, and at his Amazon Author Page.

Update: The Fourth and final book in the Horton series, The Devil and the Detective, is due out on April 21st, and can be pre-ordered here. It promises to be as fantastic as the rest of the series, so go and order your copy now!
Lloyd Shepherd is also currently working on the exciting Riddle of the Sands project. Check it out, and if it captures your interest, you can pledge support in exchange for some exciting rewards and a dose of adventure here.