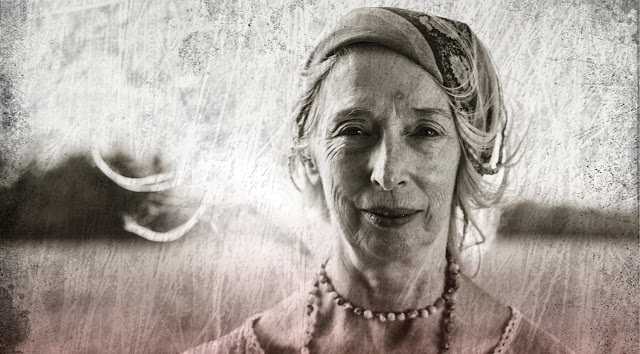 The trial of Jane Wenham for witchcraft in 1712 was one of the last in England before the passing of the 1736 Witchcraft Act meant witchcraft was no longer a crime punishable by law. As anyone following here at The Witch, The Weird, and The Wonderful will know by now, Jane and her story have fascinated me since I started writing about the goings on in Walkern for Accused. It was hardly surprising that I got incredibly excited to learn of the play Jane Wenham: The Witch of Walkern. Written by Rebecca Lenkiewicz, produced by Out of Joint and directed by Ria Parry, this superb piece of theatre not only gives the essential elements of Jane’s case an accessible and thought-provoking spin, but acts as a mirror to the culture and community of the times of the witch trials in general.
The play stands out immediately for having a predominately female cast, a rare enough thing even in this day and age. This isn’t just done for effect: each character is fully-drawn in awe-inspiring detail, and the play without question passes the bechdel test. There is more than that however – it isn’t by accident that those five characters represent five separate sub-categories of women – those most likely to be particularly vulnerable during the time of the witch trials and beyond, those most likely to be both accusers and accused. For when tragedy strikes the already unstable community of Walkern, the hunt is on to find someone to blame – someone guilty of both murder and witchcraft. 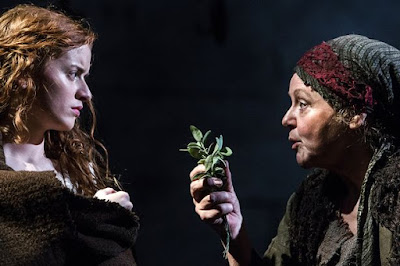 Jane Wenham and Ann Thorn
The Cunning Woman:
Common in local communities even into the 20thcentury, the cunning woman performed several roles: performing love magic, locating lost property, providing charms to protect people and animals, and aiding with any number of ailments. They also dealt in counter magic, offering cures for those who thought themselves bewitched.
In the play, Jane Wenham is portrayed as Walkern’s cunning woman: collecting herbs to make her salves and possets, snuggling with her chicken James for warmth at night, Jane is seen as “odd” by her neighbours, but generally tolerated. In the heightened atmosphere of tension after Elinor Thorn’s hanging for witchcraft however tongues start to wag, and Jane’s eccentric behaviour is seen as something more sinister by the newly arrived Reverend Crane, who sets out to discover her “guilt”.
The cunning woman had a somewhat ambiguous role in the community she served. For while she was often seen as a protective and curative force, in times of strain or unrest, or if she failed to help someone who came to her, she could just as quickly come under suspicion herself. It was therefore not unusual for the cunning woman to become a target for accusations, the line between black magic and the protective magic she dealt in becoming increasingly blurred. William Perkins condemned all “magic” equally, stating that “by Witches we understand not those only which kill and torment: but all Diviners, Charmers, Juglers, all Wizards, commonly called wisemen and wisewomen.”

The historical Wenham may or may not have fulfilled the role of cunning woman role in the Walkern community, but it is possible that she tried to help Ann Thorn in some capacity, as the young woman is recorded as having lamented that Jane had “ruined” her.
Historical cunning women accused of witchcraft include potentially Jane Wenham herself and Joan Peterson, the infamous Witch of Wapping. 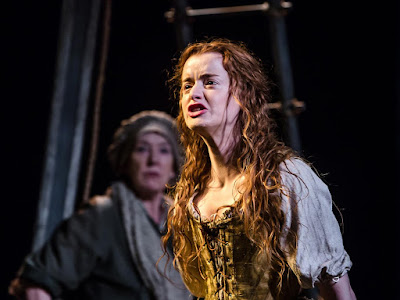 Hannah Hutch as the troubled Ann Thorne
The Young Girl:
Girls in their teens play a prominent role in many a witch trial tale, their emotional and biological volatility leaving them, it has been suggested, particularly open to being exploited and to believing their own flights of fancy.
The play opens on Ann Thorn reeling with shock after her mother is hanged for witchcraft: young, friendless, not knowing which way to turn, Ann is torn between the seeming support of two local women and her friend Jane Wenham.
Both the stage and historical Ann were instrumental in the accusations against Wenham. Feeling betrayed by her friend after discovering Jane has lied to her regarding her past, Ann turns on the older woman, denouncing her at the urging of the rest of the village and abandoning her to her fate. In the historical story of Jane Wenham, it is Ann Thorn who is one of the earlier to make accusations against Jane Wenham, declaring that the old woman had made her run to collect sticks and sent her into fits.
In addition, Ann of the play has the added taint of being the daughter of a witch: it was believed that witchcraft passed through families, as witnessed in the Pendle and Warboys cases among others. Her mother was also known for her immoral behaviour throughout Walkern, and her own confused behaviour more than hints at the belief in “like mother, like daughter.” 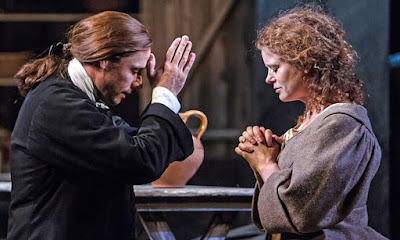 Reverend Crane and The Widow
The Widow:
Widows were two-a-penny in 17th century England, with women tending to outlive their husbands rather than vice versa throughout the period of the witch trials.
Although many widows found themselves destitute and beholden to the parish, Walkern’s widow is the landlady of the local alehouse and financially independent. Anything of importance is discussed within her walls, and there is little that goes on that she does not know about. Her unmarried state however leaves her unexpectedly vulnerable; not only to accusations of immorality due to her affair with a married man, but also to being a temptation to men such as the virginal Reverend Crane. A woman with property and not visibly controlled or protected by a man was ultimately dangerous, leaving her open to attack.
Widows who were accused of witchcraft include Mother Sutton of Milton Ernest and Mary Lakeland, one of England’s few witches to be burned at the stake for the crime of murdering her husband through witchcraft. 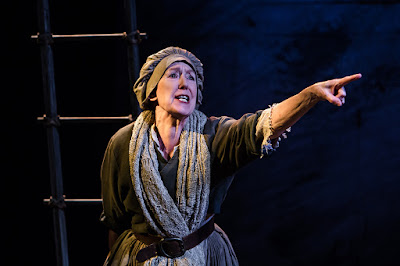 Judith Coke as Priddy Goodstern
The Old Woman:
“Old” did not necessarily mean the same in Jane Wenham’s time as it does to us today: then, being over fifty could mean being labelled or ancient. As with widows, there were many more “ancient” women than there were men and it was a vulnerable position to have indeed: the elderly were more likely to be in need and to ask for charity from their neighbours, leading to recriminations and guilt on both sides if requests were refused. Age and infirmity could also increase irritability and an unpleasant nature, leading to conflict with one’s neighbours.
Walkern’s Priddy Goodstern is not only old but blind, and it is likely that she has often found herself in need of assistance from the community. A large proportion of women accused of witchcraft were referred to as “old”, and Priddy is indeed seen meeting with local woman Bridget Hurst and Ann Thorn and discussing when “the black man” or the Devil has visited her both as a child and in later life.
Priddy’s blindness brings to mind that of Old Demdike, one of the notorious “Pendle” witches. 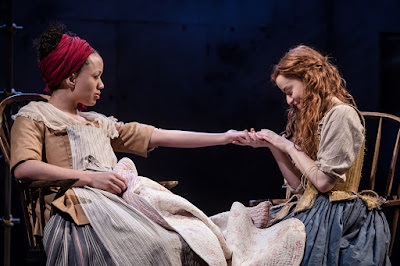 Kemi Martha and Ann Thorn
The Servant:
A run-down of the women of Walkern would not be complete without mention of the servant, a class known historically for gossiping and being too quick to believe tales of witchcraft and superstition.
A former slave from Virginia, Kemi Martha now works as housekeeper to the Bishop. She is free to come and go as she pleases and is paid a wage, but her position only offers her a certain degree of protection: like other servants at the time, ultimately she is at the mercy of her employer’s good will, a fact particularly starkly represented in Kemi’s relationship with the Bishop. Already the target of gossip due to her skin colour and intimacy with her employer, as tensions begin to rise in the village Kemi finds herself under yet closer scrutiny, relating how, upon rolling a bucket down the hill, Bridget Hurst and Priddy Goodstern whispered about her.
The character of Kemi is particularly reminiscent of Tituba, the “Indian” slave who was accused at the start of the Salem witch trials, twenty years before the events in Walkern. The bucket incident also harks of true events, as the accusation that she had made a bucket run to her down a hill was used against young Mary Spencer in 1634. 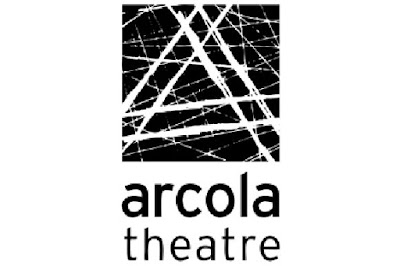 Jane Wenham: The Witch of Walkern is showing at the Arcola Theatre, London, until 30thJanuary.

My review of the play can be found here.
* All production images copyright Out of Joint/Richard Davenport