Skip to content
Back in October I had the pleasure of watching two performances of Jane Wenham: The Witch of Walkern at The West Yorkshire Playhouse in Leeds. A new play by Rebecca Lenkiewicz and Out of Joint Theatre, and directed by Ria Parry, Wenham is inspired by the momentous events that took place in 1712 in the Hertfordshire village of Walkern, when Jane Wenham was one of the last women to be condemned of witchcraft in England. 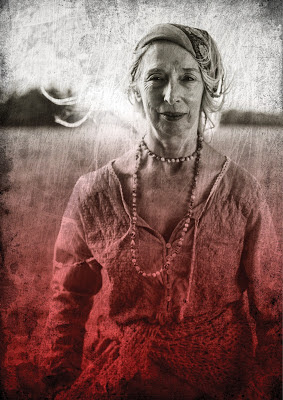 Far from being a straight telling of the historical narrative, the play takes the core concepts of the Wenham case and uses her story as a vehicle to explore the timeless themes of consent; identity; grief; loss; sexuality; and desire. By turns amusing, chilling and poignantly thought-provoking, this gripping piece of theatre transcends the historical record to present a relevant, modern, frequently uncomfortable, but entirely necessary, take on witch hunts both then and now.
For, in the close-knit community of Walkern, everyone has a secret to hide. From the Widow Higgins at the local alehouse to Samuel Crane, the newly-appointed reverend, there is no one – whether in thought or deed – who is guilt free. The need to point the finger at others in order to alleviate deep-seated feelings of shame and culpability are central to the careful policing that goes on within any community: creating a well-spring of barely suppressed disquiet that could, at any moment, bubble over into hysteria. When tragedy strikes Wenham becomes the scapegoat – the sacrifice – for the community: the enemy within that must be flushed out before safety and order can be restored. Highlighting not only how accusations of witchcraft could destroy a community from the inside but also drawing  stark parallels with today’s perception of the hidden enemy within, this popular idea of blaming the other is shown as what it is: the de-humanising and persecution of those who are different and dare not to conform.
Imagery from the history of the witch trials that rocked England in the 16th and 17th centuries features heavily throughout: swimming and pricking a witch; the belief that a witch could turn into animal form; the deep-seated distrust of a woman’s closeness to her pet. Ludicrous as they may seem to our modern eyes, they act not only as a reminder that such beliefs were deeply ingrained in the culture of the day and taken with deadly seriousness, but also as an invitation to examine the all-too-similar whispers and sweeping judgements that make up society today. The mounting sense of suspicion, panic and eventual hysteria are therefore as much a commentary on the 21st Century as Wenham’s time.
The play also addresses two connected and pressing issues within theatre today: the dearth of plays reaching the stage by female playwrights and the lack of female protagonists. Wenham tackles both by daring to be written, directed and predominantly acted by, women. The very topic of the play – that of the witch hunts – brings issues of gender to the fore. The society in which Wenham lived, and the witch trials themselves, were, on a day-to-day level, policed by women, with women taking a prominent role as both accusers and accused. The myriad of small yet constant interactions within the daily to and fro of village life provided the fertile ground from which suspicions and accusations could, and did, spring with devastating consequences. 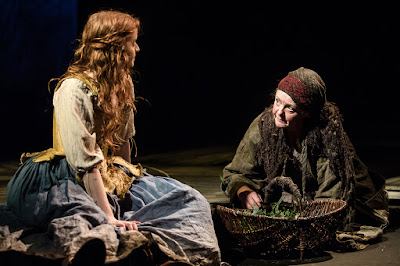 © Richard Davenport/Out Of Joint Theatre.
The passion of the script is matched by the carefully selected cast: Among the sterling performances David Acton’s portrayal of the intellectually-energetic and troubled Francis Hutchinson was a joy to watch, contrasting neatly with the equally unsettled and tortured religious conviction of Tim Delap’s Reverend Crane. Acton also makes for a marvellously obnoxious Saul Paterson; village stalwart and drunk, he also acts as a chilling reminder of the precarious position held by in society with his half-threatening “I keep you safe” to Widow Higgins.

Amanda Bellamy makes for a deeply sympathetic, and often heart-breaking, Jane Wenham, by turns defiant and bewildered as she is isolated and tormented by her neighbours. She epitomises, as the historical Wenham does throughout the sources, many well-documented attributes common to those who were accused as a witch: unafraid to speak her mind, elderly and vulnerable due to a lack of protection from husband or family, Bellamy’s Wenham retains her spirit to the last, broken but not defeated as she shouts curses on the village as she is led away.

Rachel Sanders as the grieving Bridget Hurst and no-nonsense Widow displays a wonderful versatility in her moving and accessible portrayals of both, while Judith Coke’s sightless Priddy Goodstern is by turns bawdy, shocking, and a chilling reminder of lost childhood. Andrew Macklin tugs at the heartstrings as the deeply unhappy Fergal McGuire, even as his performance as the Pricker leaves you squirming in your seat.

Cat Simmons as Hutchinson’s housekeeper Kemi Martha never fails to draw the eye when she is on stage. The character with the arguably lowest social status due to her position and the colour of her skin, Kemi in fact provides the unlikely thread that weaves the whole piece together: her haunting singing following through to the final scene and remaining with you long after you have left your seat. Finally, but by no means least, Hannah Hutch catches perfectly the frantic, disturbed nature of Ann Thorn. Haunted by her past and her own, unacceptable, nature, she moves through the events that unfold with a desperation that is palpable; running, jumping, always moving, building to a fever pitch that threatens to destroy everything and everyone around her.

(And no review of Jane Wenhamwould be complete without a shout out to James the cockerel. Although only seen once he is often mentioned and he remains, without a doubt, a star along with the rest!)
Ultimately, Jane Wenham: The Witch of Walkern is a vital and timely piece of theatre. At the very core it holds a mirror to society today, never more apparent than when the Widow asks towards the end of the play:

“Where does all the hate hereabouts come from?”

Fergal’s answer is perhaps the most revealing of all, as he tells her:
“People are unhappy. Jealous. They enjoy another’s suffering.”
He then adds the ultimate question, tinged with a disbelief that we should share, as we question and examine the all-too-ready willingness of people to turn against one another even in these “enlightened” times:
“Unless they truly believe it all.
Do they?”
*********