Skip to content
Isobel Gowdie, perhaps the most famous of accused Scottish witches, came to the attention of the authorites in 1662. It is uncertain just what led to her arrest, although it seems there were rumblings in the area of Auldearn, Nairnshire, for a while beforehand. What is known is that Isobel made a series of spectacular and detailed confessions, the fullest known set of confessions known to exist for the period.
On 13 April, Isobel, before the ministers of Auldearn and Nairn, and a panel of twelve others, confessed that 15 years ago she had met with the Devil in the Auldearn Church, where she renounced her baptism and, with one hand on her head and the other on her foot, offered the Devil everything that lay in between. She was baptised after the Devil scratched her, using the blood to perform the parody of the traditional ceremony. Her new name, according to Isobel, was Janet. This was far from the only time she saw her diabolical master: on their next meeting, they had known each other carnally.
Over the next six weeks, Isobel confessed further. She and the group of thirteen witches she worked with had done much to bring terror to those who displeased them. Ruining crops and stealing milk from their neighbours cows were high on their list of activities, with one particular incident involving spreading a mixture made from nail clippings from the exhumed corpse of a dead infant, kale and grains on a man’s muckheap – the intention being that his corn and lambs would be taken and come to the coven instead. They were able to stop a cow from producing milk by passing a plaited rope between the animal’s legs: it would give no milk until the rope was cut.
Isobel and her fellow witches had also made attempts on the lives of the children of the local Laird, and also on the life of the Laird of Park himself. A figure was made from clay, resembling one of the Laird’s sons; it was laid before the fire, with the intention of causing the child greater and greater suffering each time it was roasted.
Flight was another power Isobel posessed. With elf arrowheads obtained from the fairies, the witches lay in wait to shoot their enemies; Isobel confessed that she was responsible for at least four deaths in this fashion. 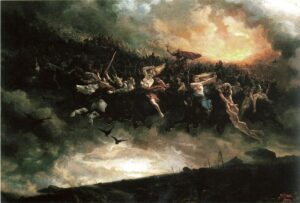 Peter Nicolai Arbo: The Wild Hunt of Odin, via wikimedia commons
Like many witches, Isobel revealed that they were able to change their form with the following words:
I shall go into a hare, with sorrow and such great care; and I shall go in the Devil’s name, ay while I come home again.
To change back into human form, they recited:
Hare, hare, God send thee care. I am in a hare’s likeness now, but I shall be in a woman’s likeness even now.
Finally, Isobel confessed that she had paid a visit to the Downie Hills, home to the fairies, where she had the honour of meeting the King and Queen themselves. Unlike many who visited fairies however, despite eating a great deal of meat while there, she left without difficulty after being entertained most generously by her fairy hosts.
Although Isobel is generally believed to have been executed after a trial for witchcraft, there is no actual record of Isobel’s fate or the trial that is assumed to have taken place. Her confessions have often been said to have been the product of an unstable mind, but more nuanced modern interpretations suggest that, on the contrary, Isobel acted within the narrative and cultural framework in which she lived.

1 thought on “Baptised by the Devil: The Confessions of Isobel Gowdie”