Skip to content
One thing that anyone with an interest in witchcraft cases of the 16thand 17th centuries will quickly notice is how often animals are involved in accusations and ‘proof’ of bewitchment. This is unsurprising; animals, especially horses, cows and pigs (the animals most commonly cited in such cases) were of great importance, the loss of one or several animals potentially the difference between survival or ruin for many. 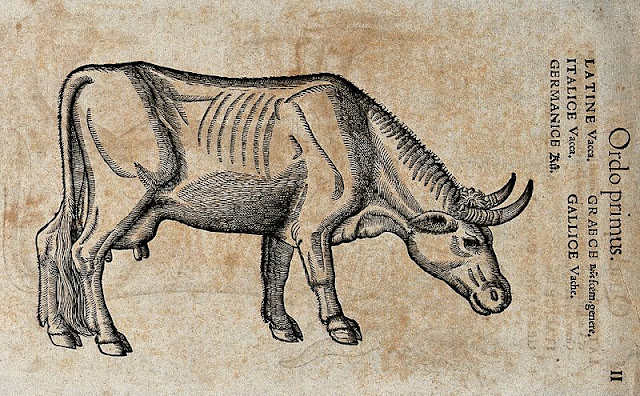 © Wellcome Library, London
This selection of newspaper stories below show that not only did belief in witchcraft continue well after the passing of the 1736 Witchcraft Act which legally at least put an end to such ‘superstitious nonsense’, but also how much animals continued to feature in accusations and belief well into the 19th century and beyond.
The Ipswich Journal, 20th August, 1763

We learn from Duxford in this County, that a Horse was intended to be buried alive to prevent the further Progress of Witchcraft; but it unluckily happen’d, that whilst they were putting him in the Ground (the Grave being already dug) he died, being ill of the staggers, before he could be covered up; and we hear further, that several Horses, Cows etc are dead, which they likewise attribute to the Machinations of a poor decrepid old Woman.

Just shy of 50 years later, a series of correspondence was repeated in the Lancaster Gazette in 1810 regarding a farmer in the vicinity of Burton-in-Kendal, who was charged with:

…the crime of roasting a calf alive, for the purpose of soothing a witch, who persecuted his family.

The full story was that:

A farmer had lately several of his calves die of the distemper; some of his credulous neighbours persuaded him that they were bewitched; and a cunning woman told him that nothing would thrive about his house till the witch was burnt, and that the most effectual way of breaking the enchantment was to cause a calf to be burnt alive.

The scene related was a gruesome one indeed; the fire was set and two people held the calf down on it – the animal, understandably distressed, tried to escape and did so several times, on each occasion being brought back to the fire until the horrid deed was done.
Another half century later and fire – that much-favoured weapon against witches and witchcraft – was still being employed in Cornwall in the hope of breaking the power of a witch.
Cornubian and Redruth Times, 28th May, 1869.

A publican, the head of a respectable family, mysteriously lost a number of his pigs. Five were found dead, while three were in their last gasp. With one of the latter he was induced to try a prescription, having been led to believe that the work could be none other than that of the village witch.

The report goes on to tell how the farmer:

Extracted the heart, and having stuck it all over with pins, placed it in front of the fire until it was charred to a cinder.

Although English witches were hanged rather than burned, the association with witches and fire was one that was indisputably strong in the public imagination, and so it is not surprising to find fire playing a part in finding a cure for the tormented animals or, by extension, the family that owned them. Items belonging to the witch (such as hair or toe nail clippings) were frequently burned to break a spell, setting tongs in the fire could prevent a witch leaving a room, and burning a bottle containing a victim’s urine could either reveal the identity of a witch or torment them into breaking their spell. As a precedent to the cases above, in the last decade of the 16thcentury, Master Robert Throckmoton was advised to bury his dead cow and burn it in the hope of breaking the power Alice Samuel of Warboys had over his cattle.
Burning items and the use of fire was a useful and less direct aid to break a bewitchment as it meant that the ‘witch’ herself did not have to be present. Unlike the personal and violent act of ‘scratching’ a witch (which, despite the mild connotations of the word often left the victim bruised and bloody and was in many cases simply a glorified excuse for gross bodily assault) the ‘bewitched’ party did not need to come into contact with the person they accused, a situation that, even if they knew the identity of their tormentor was not always desirable. This was particularly relevant post 1736 when attacking someone believed to be a witch was a crime in itself and could see you before the courts if the ‘witch’ decided to press charges. Burying items could also be hoped to serve a similar purpose, as in the first account. 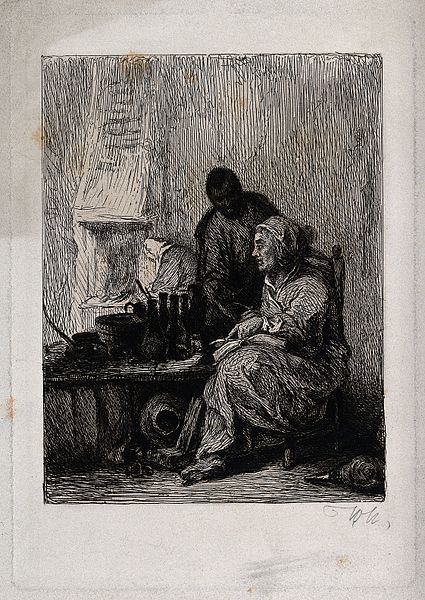 © Wellcome Library, London
The general response by the newspapers of outrage and horror that such superstitious nonsense could continue in those ‘enlightened’ times is common in newspaper and other sources throughout the 18thand 19thcenturies. The obvious gap between the belief of the ‘educated’ and that of the simple common folk who knew no better is clear, as is the frustration that nothing could be done about it; the belief in witchcraft continued to be deep rooted in some areas at least, well into the 20thcentury.
All newspaper sources copyright of the British Newspaper Archive at www.britishnewspaperarchive.co.uk