Skip to content
Belief in witches and their ability to cause harm to others was prevelant throughout the 16th and 17th centuries. One popular way to counter the bewitchment and to break the bold of the witch over an individual or his family and livestock was to remove the heart of a dead and bewitched animal.  This would then be stuck with pins and/or then burned. The continuation of such beliefs after official persecutions and prosecutions for the crime of witchcraft is particularly evident in the South West of England,  as these two newspaper reports from Devon testify.
The first took place in Drewsteignton, Devon,  and was reported in January, 1861. According to the Devices and Wiltshire Gazette,  two horses belonging to “a certain farmer” residing on the western side of the parish had died.  Although the writer attributes this to old age,  the farmer,  his workman,  William,  and their neighbours,  believed the deaths to have been caused by witchcraft.
After consultation with a “White Witch”, the bodies of the dead animals were dug up and the heart of each removed. The hearts were then “stuck all over with pins and blackthorn and wrapped in brown paper.” At nightfall,  the organs were burned in a huge fire built nearby,  with a quart of coal used to ensure maximum heat.
The second incident took place a few years later in 1869, this time in Dittisham.  When a publican lost several pigs in quick succession with no obvious cause,  he was persuaded that witchcraft was behind the death of his animals.  Following the advice of a friend,  he had the heart of one of the dead pigs removed,  and stuck pins all over it.  The Heart was then placed in front of the fire until it “charred to a cinder.” 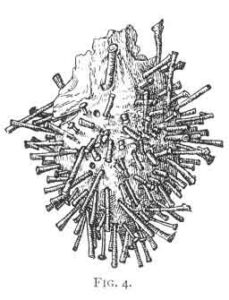