Skip to content
With the festive season truly upon us, this week brings with it the last Wednesday Weirdness slot of 2015. It is with great pleasure that I welcome Suzie Lennox to The Witch, The Weird, and The Wonderful to share her knowledge on the fascination and often gruesome topic of bodysnatching.
*********
The fear of dissection laid heavy upon many a parishioners heart. Likewise, if you were condemned to death and dissection was part of your final sentence, then no doubt your palms would begin to sweat some more. If your final resting place was the local churchyard, a niggling doubt might mean your thoughts turned to the resurrection men, and the crumpled sack that might be lying next to your grave waiting to take your dead body to the surgeons. Sometimes, if you were lucky enough, your friends would rescue you from the fate of the surgeon’s knife; bundling you into the back of their cart and whisking you away from the gallows for a decent burial, but not before struggling with your body, pulling it back and forth with some more than determined surgeons on the other end.
On occasion, no amount of tugging and pulling could wrench your body from a determined surgeon, but sometimes, your friends might win out. Who knows, even the bodysnatching preventions that you have ensured will be placed on top of your grave might actually work and the resurrection men will target some other poor soul in the churchyard.
Dissection was invasive; skin stripped from your body, veins and arteries pumped full of coloured wax and then the unknown fate of your skeleton after the fat and sinew were boiled from it was not worth thinking about. It was to be hoped a rescue could be made somehow.
Only a true friend would go to extreme lengths to ensure your body was unsuitable for the surgeons. In February 1815 friends of John Worthington showed just how much he had meant to them when they tried to save his body from the surgeon’s knife. After John had been hanging for an hour, his friends rescued him from the gallows and poured vitriol and quicklime into his coffin which ‘caused a fume to rise in volumes from the grave’. They then sealed the lid and buried him in a freshly dug grave in Low Churchyard, Kilmarnock, knowing that the surgeons would leave this particular cadaver alone. 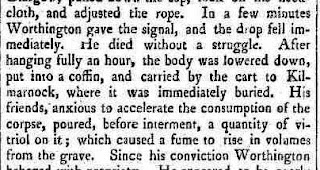 Depending upon which way you look at things, the friends of the recently executed Mr Robinson went to more extreme measures to ensure their friend’s corpse was kept from the hands of the surgeons. In the summer of 1753, the Derby Mercury printed a short article detailing the death and burial of Mr Robinson: 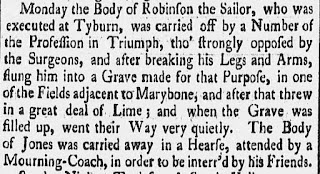 Rest assured that both cadavers would have been rendered completely useless for the surgeons, and it is to be hope that the resurrection men knew about the quick lime and vitriol before trying to exhume the bodies!
You could of course just be plain unlucky. If alternative arrangements for your burial had been made and subsequently a body presented itself for dissection, the needy surgeons were not going to turn it away.  In November 1818, after struggling on the end of a rope and hanging for ‘the usual length of time’, John Barnet expired after being found guilty of breaking into a house in Aberdeen. His body was taken away and conveyed to a waiting boat to be buried at sea. But, rumour has it that the November tide washed poor John Barnet ashore only a few days later and his body was conveyed to the surgeons table to be dissected at leisure.
If local parishioners heard of a snatching or smelled something suspicious then hopefully they could react in time to prevent your body being whisked away for the surgeons. The story of ‘Dandy Jim’  has no doubt been reworded and retold in many a parish across the land, as have stories of bodies being discovered in the back of carts whilst the bodysnatchers in question nipped into a nearby inn for a refreshing dram. Some corpses were never to be seen again, but some were lucky and re-interred, often in the churchyard where the discovery was made.  Due to its location, Newcastle became a ‘hotspot’ for the discovery of bodies squashed into hampers or boxes, often loaded onto coaches bound for Edinburgh or London. Little 7 yr old Elizabeth Mills was found stuffed in a trunk at the Queen’s Head Hotel, Newcastle where she was ‘en-route’ to Edinburgh and one year earlier in 1828, Mary Jewitt was found at the Turf Hotel after being put on a coach in York. Rebecca Shearman was discovered in the wagon office of Messrs. Marsh & Swann in Cambridge in December 1830 after she was stolen from St Mary’s church, Ely and it is to be hoped that a mix up in packages at one Edinburgh coach office in 1829 between a cadaver and box containing ham, cheese and eggs resulted in the unfortunate recipients altering the authorities so that the cadaver could be reburied and left in peace!
But it is perhaps a father’s love for his child that ensures the surgeons didn’t get their hands on those children who had passed before their time, as the case reported in the Carlisle Patriot  in 1842 shows.  As guard of the Express coach which travelled between Hull and London, Mr Cuckson had no doubt witnessed his fair share of bodies being discovered in hampers, the smell of which would have been enough to cause any father to ponder ways of ensuring his loved ones would be safe in their graves.  When Mr Cuckson’s daughter died in 1832 he was determined that no surgeon would have the body of his daughter so he organised a mock funeral, instead burying her body in his back garden.  Sure enough, not long after the burial it was discovered that the grave had been disturbed by bodysnatchers.  Happening upon an empty coffin would have given the bodysnatchers an unexpected surprise and perhaps Mr Cuckson the satisfaction of knowing that not only had he foiled the bodysnatchers and the surgeons, but also that his daughter was buried in the back of his garden, secure in a coffin made out of window shutters. 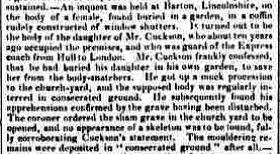 Suzie has now been researching the dark tales of Britain’s resurrection men for over ten years, after becoming interested in bodysnatching whilst studying History at University. Newspaper clippings and archival evidence continually adds to a growing database which currently lists over two hundred individual resurrection men – please feel free to contact her if you find any during your research. For those interest in the darker side of history you can follow Suzie’s twitter account @diggingup1800 or read her blog Britain’s Forgotten Bodysnatchers.