Skip to content
It is a delight to welcome HJ Blenkinsop to The Witch, The Weird and The Wonderful this fortnight with a subject close to my own heart: witches and their close companions, black cats….
*********
Halloween is right around the corner and we will soon be awash with caricatures of black cats in pointy hats sitting by cauldrons and brooms. The cat, typically black, bubbles up in the popular imagination when we speak of witches’ familiars. But where does this stereotype originate and how did it develop?
In Essex Witches, Peter C. Brown writes, “a ‘familiar’… is a supernatural being that helps support a witch and in western culture the stereotypical familiar is a black cat.”
Of course, familiars were not limited to feline form and could be dogs, hares, toads, rats, donkeys or even flies, among many others. George Gifford’s Dialogue Concerning Witches describes witches’ familiars as “spirits, some hath one, some hath more… some in one likeness, some in another, as cattes, weasils, toads, or mise.” 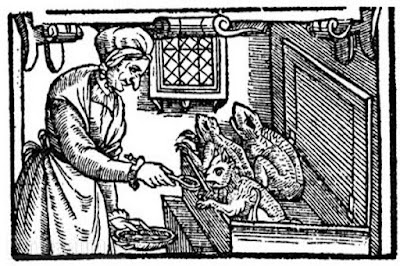 Weren’t they just pets?
Why were these living animals considered familiars at all and not simply pets? Christina Hole notes in Witchcraft in England, that keeping domesticated pets by Elizabethan times was not only unusual but grounds for suspicion.

“In an age when fondness for small animals was nothing like as general in England as it is now, the actual possession of any beast that might be supposed to be a familiar was a clear danger to anyone suspected of witchcraft, especially if he or she were known to treat it with affection. It was not even necessary for the creature to live in the house; a dog bounding towards a suspected person in the fields, or a cat jumping through a window might be enough to confirm an already existing suspicion” (Hole 1991).

However, such suspicion was overwhelmingly leveled at elderly women of lower social class. The more vulnerable members of society who lacked the ability to properly defend themselves against any resulting charges. It’s interesting that during the same period in history, small dogs were popular among middle class ladies, but because of their class privilege, they were immune from suspicion – as were their pets.
Fantastic familiars and their names.
In Nine Lives, the Folklore of Cats, Katherine Briggs offers descriptions of familiars and their names allegedly given by accused women at trial. Of course the most salacious familiar named must be Sathan, a white spotted cat and familiar of Elizabeth Francis, named during one of the earliest Elizabethan Witch trials, that of the Chelmsford Witches in 1566. But as we will see, familiars came in many forms, both living and supernatural.
Notorious Witchfinder Matthew Hopkins, who later published The Discovery of Witches, claims to have watched the accused Elizabeth Clark for four nights and seen her six familiars (but could only name five). These included a fat spaniel without legs called Jamara, and ox headed shaggy hound called Vinegar Tom, a rabbit by the name of Sacke-and-sugar, Newes the polecat and a white kitten called Holt. Another witch confessed to having the following imps as familiars: Ilemanzer, Pyewacket, Peck in the Crown and Grizzel -Greedigut.
Ursula Kemp, tried at the St Osyth with trials of 1582, confessed to having the following familiars; a black toad named Pigin, a black lamb called Tyffin, four imps, a grey cat called Tittey and a black cat called Jack.
In A Discourse on Witchcraft, Edward Fairfax records the familiars of six women to include three Lilliputlean sheep, three dragonesque beasts, a goat, a seal, a monkey, a lizard, a pig and three fish. In another case, he records the familiars as being a devil, a humanoid figure with a dog’s head, two cats and an assortment of birds.
Fairfax also documents the names of two cats; Inges, a white cat spotted black belonging to Margaret Waite’s daughter and Gibbe, a big black cat of forty years, belonging to the old widow Jennet Dibble.
There are numerous other examples containing equally fantastic description of familiars and names for them. What’s especially interesting is that the majority of them were not cats at all. Of the cats identified, only two were described as black, Jack and Gibbe. Poor old Jennet Dribble most likely had several black cats over those forty years, but no one noticed them come and go. 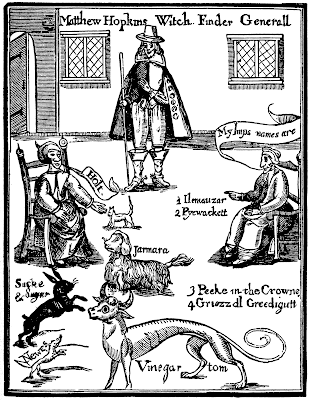 How did cats become witches’ familiars?
The evidence so far suggests that myriad creatures could be witches’ familiars, very few of them cats. Metzler, writing on Witchcraft and Cats in the Middle Ages, reminds us that “in the Middle Ages as such (i.e. before 1500) cats were primarily associated with heretics and only rarely with witches.”
Before 1500, cats, specifically ones black, were associated with the devil. Writing on Satanic Rituals around 1180, Walter Map explained that during these affairs “the Devil descends as a black cat before his devotees.” While in The Classical Cat, Engles suggests that by the thirteenth century, some in the church supported the idea that evil spirits, such as strigae, incubi, sylvani and others could inhabit the bodies of cats.
Certainly, the deck was already stacked against the black cat. To make matters worse for cats and cat ladies, in 1233 Pope Gregory IX issued the Vox in Rama, sanctioning the extermination of cats, especially black ones. Not surprisingly, after this time, any association with cats, black or otherwise, brought dire consequences.
The association of witches and cat familiars became so ingrained, that simply having a cat was enough grounds to be accused of witchcraft. Briggs writes that as late as the 19th century, an old woman was thrown down a pit at Monk Soham in Suffolk purely for having a pet cat. The logic being; she has a cat, she must be a witch! The only other corroborating evidence was that she went to church in a black silk dress.
Why was wearing black a cause for concern? Black was associated with the devil (and of course heretics who were associated with cats). And it’s easy enough to imagine a poor old women, living alone, feeding a stray cat or letting it into her home for company. So emerged the stereotype and stories of witches and their ‘familiars.’

“Ah! cats are a mysterious kind of folk. There is more passing in their minds than we are aware of. It comes no doubt from their being so familiar with warlocks and witches.” Sir Walter Scott 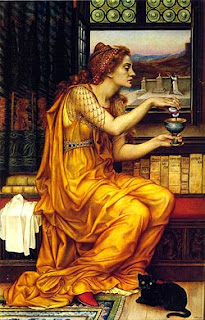 HJ Blenkinsop Ph.D. is the author of Kitty Tweddle and the Wishing Well. She dabbles in soap making, potion mixing, has a passion for tweed, and blogs about the bazaar at Chicken Road Diaries. She lives with her partner and their three-legged ’tuxedo’ cat in New York.