Skip to content
Today marks the very first Wednesday Weirdness post here at The Witch, The Weird and The Wonderful, and it is my very great pleasure to welcome Undine, with a tale of a general who made a rather rash bargain….
*********
Jonathan Moulton (1726-1787) was an accomplished general, who served his country with distinction in the French and Indian Wars. He did much to contribute to the development of New Hampshire, and became a prosperous and public-spirited landowner. He did much for his country during both war and peace.
And he was such an unpleasant character that even the Devil got fed up with him.
Legend has it that one day early in his career he said to his wife Abigail: “I’ve got to get hold of some money. I am not a man ever to be satisfied with a retired army general’s pension. I need cash, wealth, riches, money to burn.”
Abigail had no argument with these sentiments.
“I’d sell my soul for unbounded wealth,” Moulton continued.
Mrs. Moulton began to get a little nervous. She had obviously read enough quaint legendary tales to be able to guess what would come next.
Sure enough, a short while later, the General saw sparks suddenly flying from out of his chimney. They were followed by a tall, distinguished-looking fellow dressed in black velvet. “You’ve often said that neither man nor devil could get the better of you in a trade,” Satan commented agreeably. “Let’s see you prove it.”
After a bit of dickering, Moulton and the Devil came to a deal: The Infernal One would fill Moulton’s boots with golden guineas on the first day of every month. In return, the Devil would get Moulton’s immortal soul. 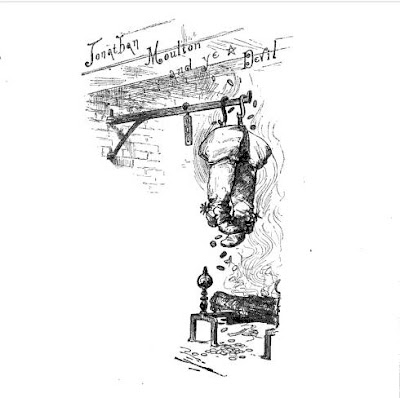 The Devil warned Moulton not to “play me any tricks,” or he would repent it. But, of course, the General thought he knew better. Not content with acquiring the largest pair of boots he could find for the delivery of his ill-gotten gains, he made the mistake of getting just too cute. One day, when the Devil was pouring the gold into Moulton’s boots, he noticed that they weren’t becoming full. He found that the soles had been removed, and as a result, the entire room was now piled with gold.
Say what you will about the Devil, but he always keeps his word. That very night, Moulton did indeed regret his greed. His house suddenly caught fire and was burned to the ground. When the General sifted through the ruins in search of his hoard of gold, he found…nothing. All of his riches had simply vanished.
As it happened, this was not the end of Moulton’s fun and games. Sometime after his ill-fated attempt to cheat the Devil, his wife Abigail died under what were described as “very suspicious circumstances”—circumstances that became all the more suspicious when Moulton almost immediately remarried. It is said that on the day of Abigail’s funeral, he removed all the jewels from this wife number one—including her wedding ring–in order to gift them to upcoming wife number two.
Abigail’s ghost soon got her own devilish revenge. One night, the new Mrs. Moulton woke up to find—something—gripping her hand. She barely had time to scream before the spectral visitor ripped her rings from her fingers and disappeared with them. John Greenleaf Whittier later immortalized Abigail’s re-appropriation of her jewels in the poem “The New Wife and the Old”:
“God have mercy! Ice cold
Spectral hands her own enfold
Drawing silently from them
Love’s fair gift of gold and gem.”
By the time General Moulton died, there were few who believed he had any hope of resting in peace. It is claimed that so many unsettling rumours circulated about the General’s hellish afterlife that his grave was exhumed, only to find the coffin was now empty. The Devil had collected his rightful property.
From what we know of Moulton, I’d say Satan got the worst of their bargain. 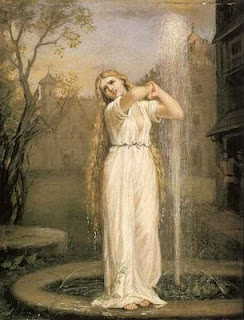 Undine is the auhtor of the blogs Strange Company and The World of Edgar Allan Poe.  She knows nothing else about herself and can be found on Twitter here.