Skip to content
This fortnight I am delighted to welcome Melanie Warren to The Witch, The Weird, and The Wonderful. In advance of the publication of her book Lancashire Folk in November, Melanie shares with us some tales of what the Devil has been up to in Lancashire.
*********
Somewhere near Greens Moor Quarry, close to the Lancashire town of Bacup, there is a large cairn of stones which was known locally as Hell Clough. As you’d expect, there’s a legend which explains how this came to be.
Close to this cairn there was once a natural pool which the devil was fond of using for bathing. One day a terrific storm swept over the moorland and the heavy rain so over-filled the devil’s favourite pool that the edge of it was in danger of giving way. If that happened, the pool would empty itself entirely down the hillside. The devil realised that he needed to construct some sort of dam to prevent this calamity, but how?
The devil looked around for an answer and down in the valley he saw a hayrick covered with thick sheeting for protection. This gave him an idea. He flew quickly down to the valley, took the sheeting and wrapped it round his waist, like an apron. Then he returned to his pool at a more leisurely pace, gathering boulders as he went along and carrying them in his apron. It was a good plan, but sadly his apron could not hold the weight he expected of it. Before he reached the pool, his apron gave way and all the boulders tumbled out to land in one huge pile on the moorland. It is this pile which later became known as Hell Clough.
As for the devil’s bathing pool, well, as he had feared, the edge of his pool did indeed give way and the whole of the contents poured away down the hillside. The handy bathing-pool was gone forever and the devil would have to find somewhere else to wash. Hell Clough is not the only natural feature in Lancashire to be linked with the devil. On Pendle Hill there is another cairn, now rather smaller than it once was, which (coincidentally) has the name of the Devil’s Apronful. This is where the devil stood when he flung rocks at Clitheroe Castle, making a new window in its side – the window can still be seen. The devil also used to walk the streets of Clitheroe, trying to persuade people to sell him their souls for three wishes. However, he was beaten, defeated by cleverness and trickery, and flew to a bridge, a mile to the south, where he disappeared. Ever since that day, the bridge has been known as Hell Hole Bridge.
On Parlick Pike, there is a well of spring water known as Old Nick’s Watering Pot. The fabled ‘Old Dun Cow’ was reputed to frequent this place and give freely of her milk to anyone who asked, without ever running dry – until she was bewitched. (But that’s another story…)
On Rivington Pike, aghostly horseman haunts the moors and is sometimes identified as the devil himself. One day, some men out hunting took shelter from a storm in a ruined tower. As they waited for the storm to pass, a horseman galloped past and one of the men, Mr Norton, recognised the rider as a missing uncle, so he quickly mounted his own horse and set off in pursuit. The rest would have followed, if not for the intervention of one of their servants, who insisted that this was not Norton’s uncle, but the spectral horseman long feared in the area.
The servant then explained that his father had been out poaching one night when a similar man on a huge black horse had asked to be taken to the stones known as the Two Lads. When they arrived there, the stranger asked that one of the stones should be lifted and beneath it the servant’s father had seen a large pit, wherein lived the devil, and the smell of the pit was so terrible it had caused him to faint. When he woke up, the stranger was gone and the stone was as it had been before.
Once the storm abated, the rest of the hunting party went at once to the Two Lads, and found Norton unconscious on the ground, looking as if he had been in a terrible fight. When he eventually regained consciousness, he explained that the horseman had indeed been his uncle, at least in part. He had been claimed by the devil and allowed to return to earth only on condition that someone else could be found for the devil’s spirit to possess. As Norton had refused to submit, even to save his uncle, the devil would have to hunt for another victim.
A less terrifying tale comes from Fulwood, near Preston. Two Roman roads cross each other at Fulwood, one being Watling Street, and it was said that these roads stretched from sea to sea in every direction, north, south, east and west. The crossroads might well be at the place known locally as Withy Trees – a very old name which indicates that here was once a grove of willows. Here, Watling Street Road crosses Garstang Road. The former leads to Ribchester, the latter to Lancaster, both of which are Roman sites. Locally, however, the Romans were given no credit for these fantastic roads. Instead, it was said that the devil made them and, what’s more, he made them in just one night.
In Lancashire of old, it was definitely not acceptable to play games on a Sunday. It may have been a day of rest, but that didn’t give licence to have fun, especially if that fun involved any kind of gambling. Three men playing cards in the Three Lane Ends pub in Chipping one Sunday were joined by a stranger, who they accepted quite happily, until they began to notice that he wasn’t like other men. There seemed to be horns on his head, though he wore a hat to hide them, and when they looked down they saw that his feet were actually cloven hooves. One can only imagine the speed at which the panic-stricken men vacated the pub. A shame for the devil, who only wanted to play a game of cards! 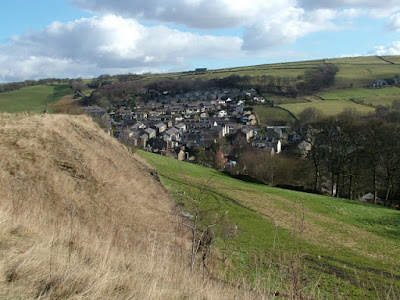 Crawshawbooth, Copyright Richard Spencer.
One Sunday morning, the boys of Crawshawbooth were indulging in a game of football, despite the remonstrations of the vicar who warned against playing such games on the Lord’s Day. They paid no heed to his warnings but perhaps they should have done – because the devil himself came along to join in the game. He waited until the ball came in his direction and then he kicked the ball so high into the sky that it vanished and so did he, in an explosion of fire. And that was the last time the lads played football on a Sunday!
On another Sunday, some local men were playing a gambling game at a disused church in Haslingden – on a Sunday! One of them threw a halfpenny up in the air and all were puzzled when it did not come down again. All was explained, though, when they looked up to see the devil grinning down at them from the beams. 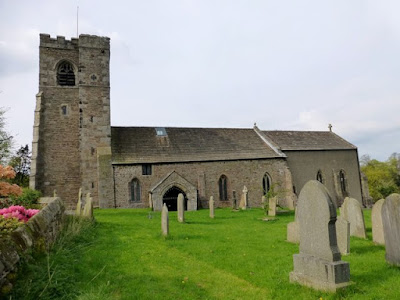 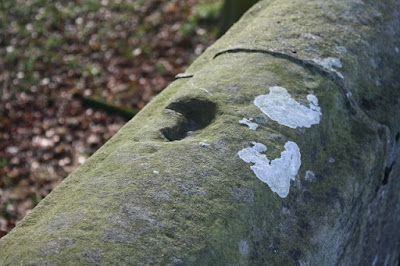 Devil’s Hoofprint on Broadfleet Bridge
Copyright Bob Jenkins.
How easy it was to trick the devil in the old days! All it took was a clever man; a schoolteacher or a priest, with a bit of common sense and intelligence – for the devil, as we can see, at least in Lancashire, is not as clever as he thinks.
Incidentally, there is another story about the devil in Cockerham – but this time the devil was one unwittingly carved on a rood-screen by a singularly inept craftsman. The church’s original rood had been destroyed by order of Henry VIII, but when Henry’s daughter Mary came to the throne the churchwardens were obliged under law to find the money to provide a new one. They employed a man who was alleged to be skilled at carving to decorate the rood-screen with an image of the crucifixion. The image, when it was completed, was just terrible. The churchwardens refused to pay the bill, preferring instead to appear in court at Lancaster to explain their actions.
The Mayor of Lancaster, presiding over the case, was told that the image was so ugly and frightening that children were scared to come near it. The Mayor dismissed that argument, saying that the man deserved to be paid for his work, whatever their opinion of it. He then advised them to ‘clap a pair of horns on his head, and so he will make an excellent devil.”
This last story is no legend, for it appeared in local newspapers – one wonders what effect it had on the business of the hapless woodcarver!
*********
This article is based on entries from the forthcoming book ‘Lancashire Folk: Ghostly Legends and Folklore from Ancient to Modern’ which will be available in January 2016. (Schiffer Publishing, ISBN13: 9780764349836 £16.99
Melanie Warren has collected British folk tales and ghost stories for almost four decades. For many years, she was a paranormal investigator and took part in innumerable ghost-hunts but never saw a ghost, although she did have several experiences she finds hard to explain… She was also BBC Radio Lancashire’s resident “paranormal expert” and co-authored two collections of ghost stories, which were broadcast on BBC local radio stations. Melanie is now concentrating on turning her extensive collection of stories and tales into a series of books, one county at a time. Melanie lives in Lancashire and has done so all her life.
Read more at www.lancashirefolk.com