Skip to content
A delve into the library today turned up this fascinating object – the toadstone.
These much-sought after “jewels” were actually the fossilized teeth of a of ray-finned fish called lepidotes. Possibly so called because they resembled the dull colouring of toads, they were credited with magical properties as early as the first century, where they are mentioned in the writings of Pliny the Elder.

Believed to be formed in the head of a toad, these stones were reported to have many properties and uses, including keeping newborn infants safe, protecting the wearer against epilepsy and kidney disease, along with being a useful cure for sores, fevers, bowel problems, and pain in labour. Also credited with preventing ships from sinking and houses from burning, toadstones would, according to the Aberdeen Bestiary, a document written and illuminated in England around 1200, bring victory to the wearer in war.
Toadstones were also said to be able to detect the presence of poison; a toadstone ring would give heat to the finger if poison was detected, or change colour to alert the wearer to the threat. 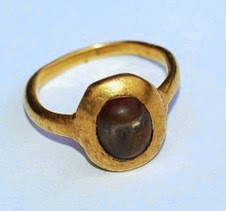 15th Century gold ring
set with a toadstone
Several methods of extraction were available to someone requiring a toadstone. Placing the creature on a red blanket was said to be efficacious; the toad would then, after a time, spit out the stone. Another method was to place a toad in a pot; the pot should then be placed in an anthill, allowing the ants to eat away the toad and leave behind the bones, and, more importantly the coveted stone.

Illustration of how to extract
and use a toadstone.
A ring containing a toadstone was part of a treasure find in 1940 near Lemmetts Hole, by an unsuspecting dog walker, and has been linked with the tale of theft of treasure from Thame Abbey in the 16thCentury.