Skip to content
It is very often said that very little in life comes without a price.  Giles Fenderlin discovered this the hard way when he found himself in prison, awaiting execution because he had:
“…made a Covenant with the Devil for 14 years, written with the blood of his two forefingers, and afterwards kill’d his wife.” 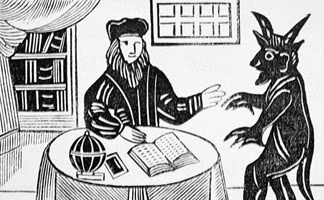 The year was 1652. As confessed by Fenderlin himself, eleven years previously,  he had been serving as a soldier in Flanders. He and two companions had paid a visit to a Jesuit priest, during which the priest offered:
“to procure them a protection from the Devil, which should secure either of them from any hurt or danger, either by iron, steel or lead; or from any would by Gun-shot, stab, or cut by sword, dagger or knife.”
For soldiers who found themselves in danger of their lives, this was a heady promise indeed. Somewhat sceptical, however, the men said they would not agree until they had seen proof with their own eyes; accordingly, it was tested on both a cock and a cat – when both remained unscathed, the men were convinced, paying the priest forty-five shillings in return for a written covenant that was to protect them for the period of five years. 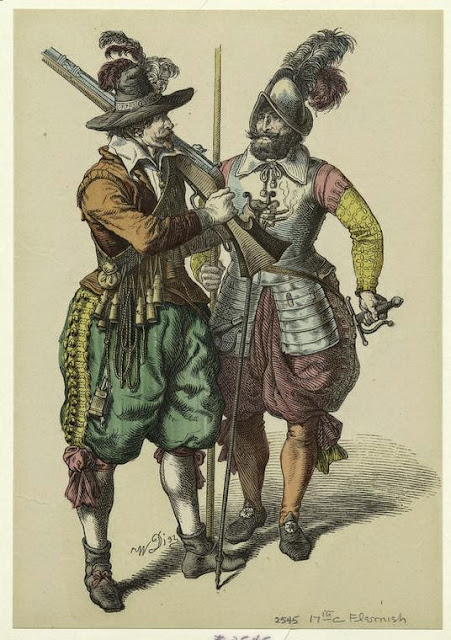 Flemish Soldiers, 17th Century
Miraculously so it seemed, the deal worked well for Fenderlin, as, by his own admission,
“During the time that he remained a soldier in those parts, he never received any wound, notwithstanding he had often times been in several battles before the face of his enemy, when he hath taken 10,12, or 14 several bullets at a time out of his clothes, which did never enter his body or limbs, only leaving some blue spots upon his skin.”
So impressed was he with this, that in 1643 he renewed and extended the deal for a further fourteen years: either as a reward or because the priest was now certain he had his man hooked, this new arrangement consisted of a covenant with the Devil himself, drawn up and written with the blood of Fenderlin’s own forefingers. The substance of this agreement was the same as before, only with the somewhat crucial addition that once the time was up, the Devil was to claim his own, taking Fenderlin’s body and soul to do with what he wanted. 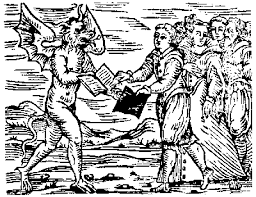 Signing a pact with the Devil

Despite the decidedly gloomy prognosis, there were benefits to this new agreement. Along with the protection from harm, the priest also presented him with a ring which contained a stone which:
“…by it if he came to any house where there was money buried, or conveyed into any private place, that he could by the direction of the ring find it out.”
Not just that, but if he were in danger, all he had to do was turn the stone of the ring downwards on his finger and then he would be transported away to a place of safety, up to forty or fifty miles, out of harms way.
The total paid for the ring and new was three pounds, seventeen shillings. The ring was only his for five years, however, and it was taken from him in 1648. This was, Fenderlin was sure, the cause of his downfall, for if he had the money to extend the arrangement with the ring, he would not have come to such a sorry state. 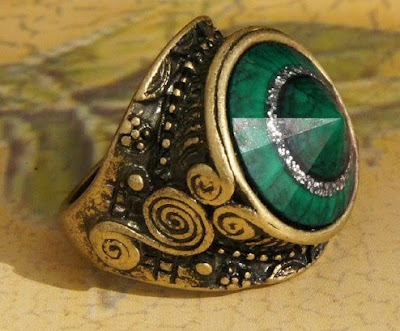 Quite what had led to Fenderlin killing the woman – he stated that although he lived with her, she was not actually his wife – is unknown. Sentenced to death for his crime, however, the man was in a bad way. He was tormented by an evil spirit that came to him at night, and had been so since the 5th March. This spirit, in the form of a lawyer in a long gown, seemed to have one aim – to convince him to kill himself, either by hanging or cutting his own throat.
His state of mind might be brought into question, but a fellow prisoner also saw an apparition in the cell. According to this man, standing close to Giles Fenderlin was a spirit in the form of a bishop, identifiable by the white lawn sleeves it wore. Fenderlin, agitated, argued with the form, declaring that:
“If you come from God, you are welcome, but if you come from the Devil, I do renounce you; for you have no right nor interest in me: therefore depart from me, and get you to the lowermost parts of Hell from whence you came; for I do both renounce, and defy you.”
After spitting fire in Fenderlin’s face, the apparition vanished, leaving the men once more alone. 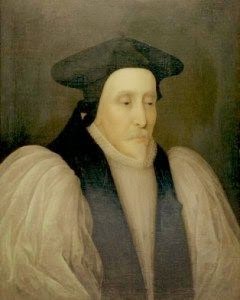 A 17th Century Bishop such as seen by Fenderlin in his cell.
The next night, they were also to get no rest. A loud thundering noise was heard up above; upon looking out of the window, what appeared to be a man was seen walking up and down in the yard below. Rob Bull, another prisoner, called out to the man, thinking him one of the servants of the house, but upon seeing the figure in full moonlight realised to his horror that although it looked as a man, it was lacking both head and arms. This was, it was declared, a familiar spirit, sent to further torment the unhappy Fenderlin.
Things only got worse with the following night, when three men of “honest repute” witnessed the appearance in the room of a form in the shape of a dog. The dog jumped at Fenderlin several times, but each time the man pushed it away, telling the others to keep away as it was Satan.
The next night, the last before he was due to be executed, several others were with the wakeful Fenderlin. Again, around midnight, it was reported that the prisoner was visited by more evil spirits – this was all according to Fenderlin however, as they were not witnessed this time by those with him. Indeed, one man ventured,
“Truly, I believe it is the guilt of your own Conscience, and nothing else; for we are all rational men, and cannot discern anything.”
Whatever the truth, it mattered little to Fenderlin. The last that is known of him was that:
“The said Giles Fenderlin was hanged in chains on Friday, being the 11thof March, 1652, upon Leaven Heath, within a mile and a half of Naylon, [Nayland] where the aforesaid bloody murder was committed.” 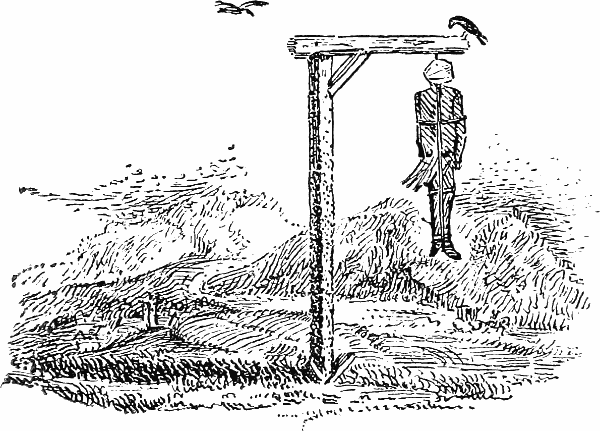