Skip to content
Having one wife accused of consorting with the devil was crisis enough. It is possible however that Thomas Oliver of Norwich, Norfolk, had not one but two wives who went to their deaths on accusations of witchcraft.
Thomas Oliver’s exact date of birth is unknown, but he married Mary Leman at St. Andrew’s Church, Norwich on 29th January, 1626. Three children were born to the couple: Mary in 1627, (who sadly died in April 1635) John in 1635, and Thomas, whose birth year is unrecorded. 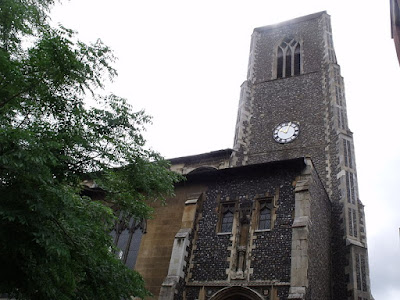 St Andrew’s Church, Norwich
Nothing else in known about the early years of their married life, but in May 1637,
“When in the reign of Charles I an endeavour was made to suppress the Puritans, a ship called the Mary Anne was fitted out at Yarmouth, by a merchant named Payne, for the conveyance of the persecuted to New England.” [Perlustrations in Yarmouth, England, Vol III]

Thomas Oliver and his family sailed from Ipswich on the Mary Anne of Yarmouth, heading for Massachusetts Bay. Thomas’ age is listed as 36, with his wife at 34. Thomas Doged, aged 30 and 12 year old Mary Sape accompanied them as servants.
There may have been more personal and pressing reasons for Thomas Oliver’s family to leave England however. Mary apparently:
“Had the faculty of speech to an unpleasant excess, and had suffered in England for neglect of some customs of trifling importance in the solemnities of the Church.”
If that was indeed the reason for their departure, the problems that beset the family did not stop with their relocation. Mary Oliver proved to be decidedly outspoken in her opinions, and she found herself in trouble on more than one occasion for declaring in favour of Roger Williams, the Puritan theologian too extreme for the Puritans. His separatist ideas were not welcomed in Salem and he had withdrawn from there under threat of arrest, but that did not stop Mary Oliver from speaking up for him and in 1638 she was punished for taking his side. The state of affairs did not improve, and it was said that she continued to be at loggerheads with the elders of the Salem community in which they lived as late as 1646. 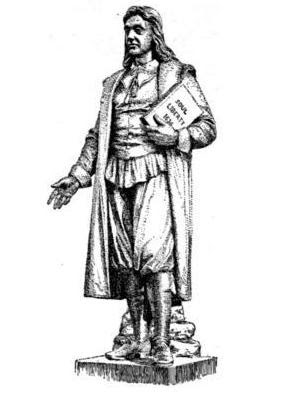 Statue of Roger Williams
A couple of years later however saw the couple returning to England, the implication being that they had to flee yet again due to Mary’s refusal to curb her tongue and Thomas’ refusal or inability to control his wife.
It is there that details grow unclear. All sources agree that Mary Oliver died within a few years of their return to England. What makes matters interesting however is the mention of a record from Norwich in 1659 of:
“Mary Oliver burnt for witchcraft and her goods confiscated for the use of the city.”
The date coincides with Thomas and Mary’s return to England, and it was from Norwich that they set out those years before. I’m still digging, but there currently doesn’t seem to be another potential candidate for Mary’s identity (although that doesn’t mean necessarily that it is the same woman – watch this space!) and until more evidence comes to light it appears slightly more than possible that this was the woman Thomas Oliver married and quarrelled with so frequently. 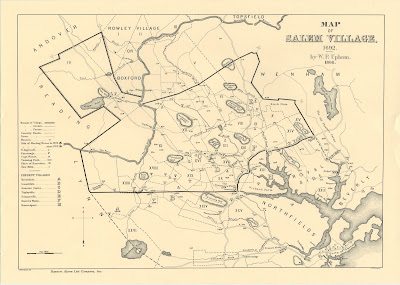 Map of Salem, Massachusetts
Whatever the fate of Thomas’ first wife, she was dead by 1666, and the widower was back in Salem and married to Bridget Wasselbe, nee Playfer/Playford on 26th July of that year. It was soon apparent that this marriage would be no calmer than his first. Bridget was known locally as argumentative, and she was taken to court for calling her husband bad names on the Sabbath. At one time their arguing grew so bad that the pair were ordered to stand back to back and gagged in the market place for about an hour to repent of their crime. Later on it is also said that they were sentenced to be whipped if they did not stop arguing with each other. Thomas Oliver was not, it seemed, slow to be harsh with his wife, and it was often reported that her face was bruised and battered by him.
Thomas also made his views known. Bridget was, he declared, “a bad wife”, and known to be in league with the Devil who had come to her at night and sat up with her until dawn.
In 1679, Thomas Oliver died. Although she was made administrator of his will, and the house and land were left to her, Bridget, in reality, had very little, as any money was taken by creditors. To make matters worse, Bridget’s step children accused her of having bewitched their father to death, amidst other accusations that Bridget was a witch. She was tried before the Court of Assistants, by the Reverend John Hale during which:
“A woman in the neighbourhood, subject to fits of insanity, had, while passing into one of them, brought the accusation against her; but, on the return of her reason, solemnly recanted, and deeply lamented the aspersion. In a violent recurrence of her malady, this woman committed suicide. Mr. Hale had examined the case at the time, and exonerated Bridget Bishop, who was a communicant in his church, from the charge made against her by the unhappy lunatic. He was satisfied, as he states, that “Sister Bishop” was innocent, and in no way deserved to be ill thought of. He hoped “better of said Goody Bishop at that time.” [Charles Upham, Salem Witchcraft, 1867]
The case was accordingly thrown out, Bridget no doubt hoping that would be the end of the matter. Bridget went on to marry Edward Bishop and although their marriage was claimed to be as volatile as the one she had known with Oliver, she escaped the courts until 1692 when she was accused of bewitching several young girls in Salem. Evidence given against her then was dragged up from the preceding decade, including her previous trial, and although she pleaded her innocence, Bridget was found guilty and condemned to death, becoming the first victim of the Salem Witch Trials.

“On June 10, 1692, High Sheriff George Corwin took Bridget to the top of Gallows Hill and hanged her alone from the branches of a great oak tree. Now the honest men of Salem could sleep in peace, sure that the shape of Bridget would trouble them no more.” [Charles Upham, Salem Witchcraft.]
Was Thomas Oliver married to two women who met their fate as accused witches? If so, were there others who also found themselves in the same unenviable position throughout the witch trial period? As I said before, it is food for thought – watch this space. 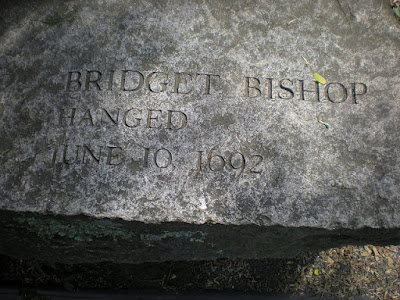 [It is also interesting to note that Mary Oliver is mentioned in later sources as having been executed for killing her husband by witchcraft. It will be remembered that this was a claim also made against Bridget Bishop – it is possible that the two wives were confused in later decades, with Bridget’s accusation being attributed to Mary.]

2 thoughts on “The Husband of Witches: The Marital Strife of Thomas Oliver”