Skip to content
Although described by William Cobbet as “certainly the most villainous spot that God ever made,” my own memories of Hindhead in Surrey are somewhat fonder. As a young girl I spent a lot of time visiting my maternal grandmother there, wandering across the Common, with my mother sharing the tales she had been told as a child. 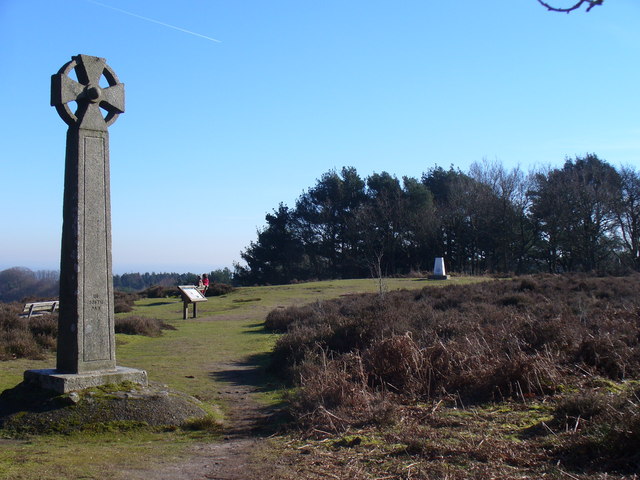 One that stuck with me was that of a terrible murder committed many years ago; a poor sailor brutally struck down, the site of the gibbet where his murderers were brought to justice, the stone erected to commemorate the event, clear in my mind all these years later.
“The stone is cursed,” I was told firmly, “Anyone who moves it or does it any harm – well, bad things happen.”

It was only many years later that I learnt the facts behind the rumours and murmurings.
On 24thSeptember 1786, an unnamed sailor stopped at the Red Lion Inn, Thursley, for rest and refreshment. Travelling on foot along the coach road, from London to Portsmouth to rejoin his ship at Spithead, it was a journey he was fated never to complete.
Whilst enjoying his drink, our sailor made the acquaintance of three men; James Marshall, Edward Lonegan and Michael Casey. They were happy to accept food and drink paid for by the generous traveller, and the man was last seen alive leaving the inn with his three new friends, heading in the direction of nearby Hindhead.
Later that day, a shepherd boy tending his flock on the Common spotted a ragged bundle on the ground in the distance. On closer examination he discovered it to be the unfortunate sailor, now stripped of his clothes and belongings and with his throat cut. The boy raised the alarm, and the three men who had accompanied the victim were apprehended a short while later, attempting to sell the dead man’s belongings further down the road at an inn at Rake, Hampshire.
Six months later, Marshall, Lonegan and Casey were tried and declared guilty before the courts in Kingston. On 7th April, 1787, they were hanged on a gibbet in Hindhead, close to the scene of their crime. Along with drawing great attention from the surrounding area, the occasion drew the dubious boast that it was the only gibbet in the country at the time to have held the weight of three bodies. The unknown sailor himself was buried in Thursley Churchyard, where his grave can still be seen today. 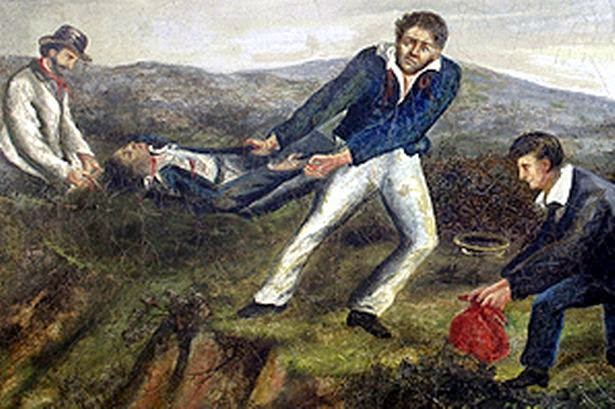 19th Century painting of the crime, artist unknown
The bodies were left in chains for several years, a grisly reminder and deterrent to anyone considering committing a similar crime. It is reported that the gibbet was damaged by a storm in 1790 but it is unclear how long it remained intact after that point, or exactly how long the bodies remained there. The main wooden post was still standing, however, in 1827.
Hindhead Common was a location much feared even before the murder.  The route was indeed a dangerous one, with highwaymen and footpads waiting to relieve the unsuspecting traveller of their belongings and lives, with strange lights and unexplained shadows lurking to frighten even the hardiest soul who strayed there after dark.  In an attempt to counteract the negative associations with the spot, in 1851 a celtic cross was erected on Gibbet Hill, paid for by Sir William Erle. This did little to quell stories of figures looming in the gloom around the memorial stone, believed to be the ghosts of the three murderers, unable to rest. The murder retained a hold on the popular imagination and has been referred to by Dickens in Nicholas Nickleby, S. Baring-Gould’s 1896 novel, The Broom-Squire, and was the inspiration behind a painting by J.M.W Turner. 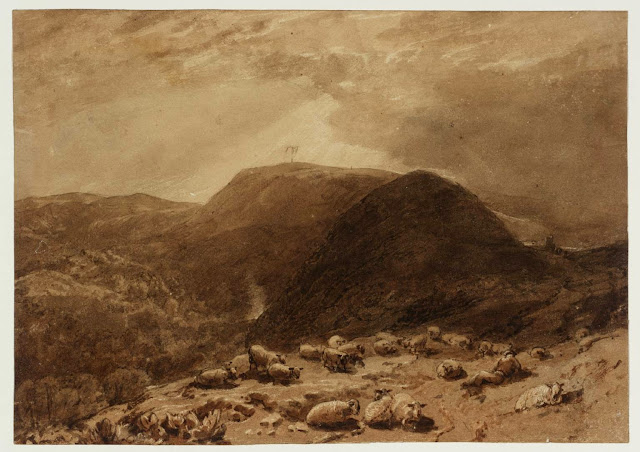 Hindhead Hill, by J.M.W Turner c.1808
The gibbet can be seen in the distance.
A less stomach-churning reminder of the murder was a stone erected on the coaching road to mark the area where the murder took place, bearing the following inscription:
In detestation of a barbarous
Murder committed here on an
unknown sailor, on September
24th, 1786.
By Edward Lonegan, Michael
Casey, and James Marshall, who
were all taken the same day and
hung in chains near this place.
Whoso sheddeth man’s blood by
man shall his blood be shed.
Genesis ix, verse 6
On the reverse of the stone is the later addition of:
This stone was erected by order
and at the cost of James Stillwell,
Esq of Cosford, 1786. Cursed be the
man who injureth or removeth this stone. 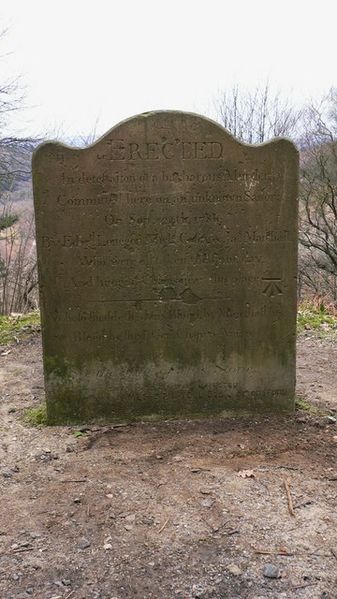 The Sailor’s Stone, by Shazz,
via wikimedia commons

The curse actually relates to local politics involved with the stone’s location. In 1826 a section of the coaching road through Hindhead was moved, and an ongoing feud between the Turnpike Trustees and Mr Hawkins, Mr Stilwell’s nephew began. The Sailor’s Stone was renovated and moved to the side of the new road, whereupon, after a great deal of argument, it was returned to its original location at Mr Hawkin’s behest. It was at this time that the “curse” was added to the back of the stone, along with some additional and long-since removed insults aimed at those who had moved it in the first place. In response to Hawkins’ obstinacy, a replica stone was erected by the new road instead. This stone was abused and vandalised and although it is not known when, by 1889 there was again only the original stone remaining. It was returned to the new road, but moved for a final time to the original site in 1932, where it has remained since.

But what of the curse? When the stone was moved to it’s final resting place, opinion was divided.  Amongst all the rumours and hear-say however, there are some verifiable cases of  ill-luck for people involved with the moving of the stone.

Rupert Chandler, manager of a local garage, laughed at the curse and volunteered his employee, Charles Harris to help move the stone. Chandler died in January 1937 after a short, unexpected, illness.
Charles Harris himself broke his shoulder when he fell from a ladder, the injury so bad that it prevented him from working again.
An unnamed worker also died of a heart-attack a short while after helping move the stone.
Were there others? Or were these just coincidence, the story a convenient way to keep vandals at bay and discourage any further dispute over where the stone was to rest?
As for the identity of the poor sailor himself, Edward Moorey has posited that he was an Edward Hardman, brother to Hussar Samuel Hardman of Lambeth. He also provides the gruesome addition to the story that the bones of the middle fingers of the perpetrators were removed and turned into gold tipped toothpicks, mementos that remain in Hardman’s family to this day.