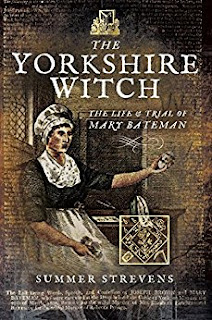 Superstition. Cunning. Manipulation. Murder.
On 20 March 1809, Mary Bateman was executed in York for the murder of Rebecca, wife to William Perigo. Although the last, this was likely not the first murder to Mary’s name, ‘The Yorkshire Witch’ leaving a trail of theft, poisoning and deceit behind her as she took her place at the gallows.
The tale of Mary Bateman is so sensational that a reader would be forgiven for thinking the details to be a work of crime fiction rather than real life. Despite, or perhaps because of this fact, there has not been a full look at Mary’s life and acts since the pamphlet written not long after her execution. Summer Strevens however redresses the balance in The Yorkshire Witch: The Life and Trial of Mary Bateman, giving the fascinating and gruesome events their first full airing for two centuries.
It has been well worth the wait: Strevens has clearly done her research, including in her study of Mary’s life such varied and tantalising details as the geographical layout of 19th century Leeds and the history of the storage of poisons, that help to bring the time and context into sharper focus and add a further fascinating layer to the incredible story. She also makes good use of the often underused resource of parish records, adding biographical details to further enhance the fragmentary glimpses into Mary’s story.
Written by a skilled and accurate narrator, The Yorkshire Witch is a compelling blend of historical research and storytelling. Along with giving the known details of Mary’s life and the harrowing relation of her murderous schemes, Strevens ventures some interesting speculation regarding Mary’s mental and psychological state. Ultimately however she accepts that we just don’t know why Mary carried out the acts she did, leaving the case ultimately open.
The Yorkshire Witch is available from Amazon and Pen and Sword Books.