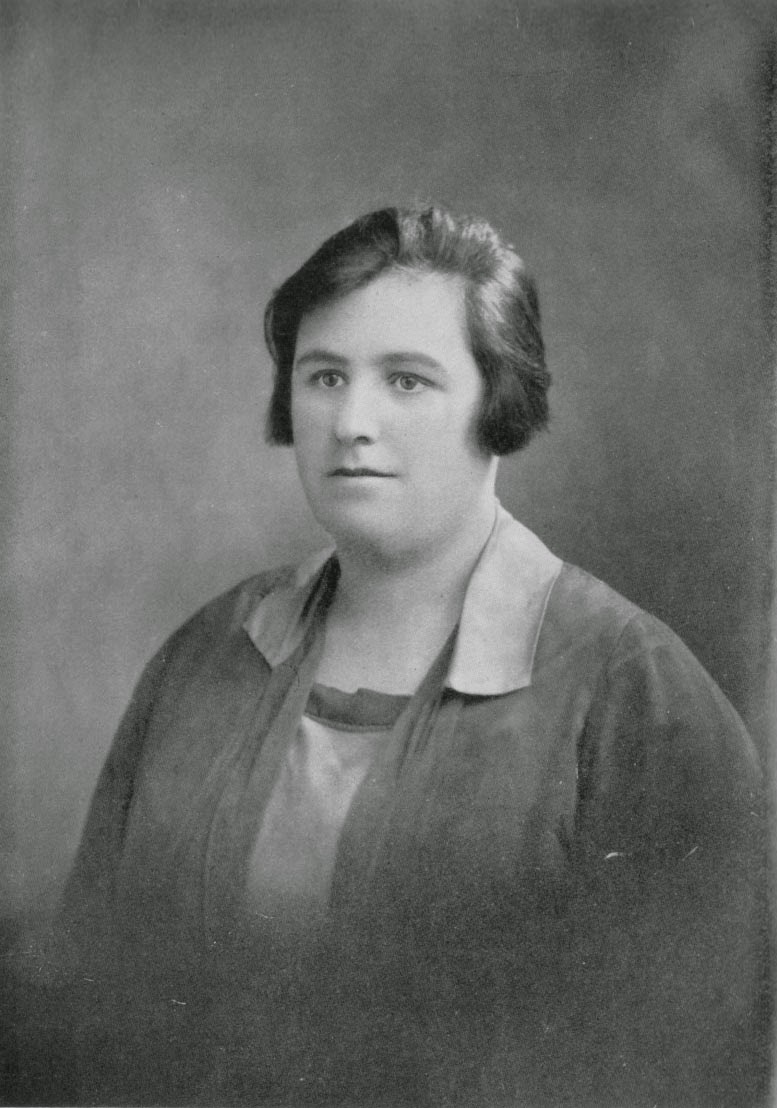 Victoria Helen Duncan nee MacFarlane
The medium Helen Duncan is best known as the last woman to be successfully convicted under the Witchcraft Act of 1735. Imprisoned for nine months in 1944 after a police raid on a Portsmouth séance, her case attracted great media attention, and was instrumental in the eventual abolishment of the Witchcraft Act, and its replacement by the Fraudulent Mediums Act of 1951. An event that is related in several sources regarding Helen Duncan, however, took place in her early life, when she was around ten years old. Well-known by her classmates and locals in the Perthshire town of Callander as “different”, she had been told in no uncertain terms by her mother to keep stories of visions and visiting spirits to herself. On this occasion she forgot the warning. As recounted by her daughter, Gena Brealy in her recollections of her mother:
“There was the incident of the village doctor who had gone missing in a blinding snowstorm. The local people, fearing he had had a serious accident, organised a search party. Hearing her parents discussing this, Helen said, “Don’t worry. He’s not far from here. They’ll find him.” As her father and mother looked at her, Helen realised she had again done what her mother had warned her not to do, so she quickly went out of the room.
The story had a happy ending however, as:
Within a matter of hours, a neighbour came to tell the MacFarlanes that the doctor had been found close by. His car had gone into a snowdrift just a few miles away. Neither parent mentioned this outcome to Helen, but she knew they had earmarked the incident as another “odd thing” about her.” 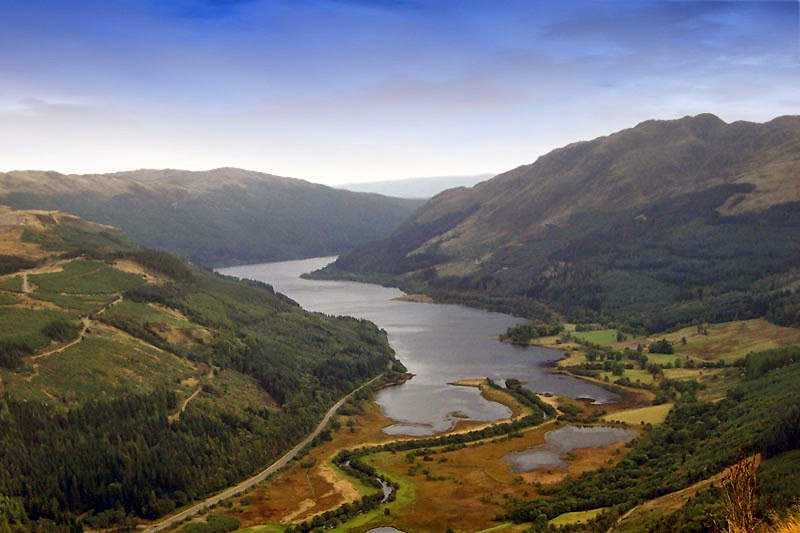 Loch Lubnaig
Noticeably different in tone is the account of the story given in  Nina Shandler’s The Strange Case of Hellish Nell.  As in the version related by Brealy,  Helen, despite being warned by her mother in no uncertain terms to stop mentioning her visions and messages from spirit visitors, couldn’t hold back when she had a vision of the fate of the kindly local physician, Dr. Todd. The tale differs however as now she went to warn the doctor that he shouldn’t make his intended journey to Strathyre. Doctor Todd, although listening politely, declined to heed Helen’s warning, leaving the young girl to worry the night away. In the morning, the alarm went up that the doctor was missing, but this time there was to be no happy ending.
“Men on horseback carrying torches gathered at the corner of Bridgend and Main Streets. Bracing themselves against the whipping storm, the search party began the slow trek towards the Pass of Leny. Nearing Loch Lubnaig, they strained to see through the swirling snow. No doubt, the rescuers would have missed Dr. Todd’s car, if not for Nell’s directions. The men shoveled furiously. Forcing the car door open, they pulled the doctor’s frozen body out. Dr Todd was dead.”
Aware of the tale as told by Helen Duncan’s daughter, Shandler decided to favour the version told to her by Mr. Harvey MacNaughton, who had lived in Callander at the time. Considered by her to be the more reliable source, MacNaughton’s version of events also tallied with those remembered by the village as a whole, and included the fact that seemed to prove the point:
“From that day forward, all Callander dubbed that curve in the road between Callander and Strathyre ‘The Doctor’s Corner.’” 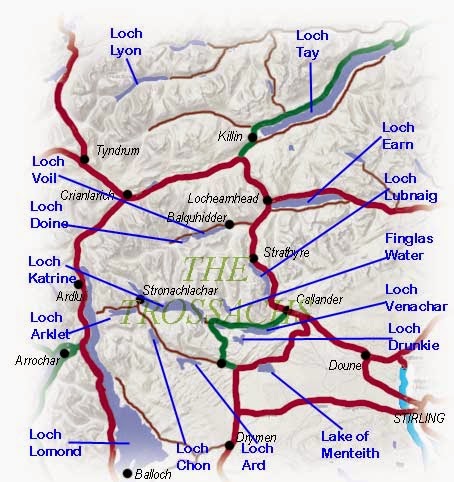 Map showing position of Loch Lubnaig,
on the road between Callander and Strathyre
What then was the truth of the tale of the medium and the doctor? The answers, or at least some of them, can be found in The Dundee Evening Telegraph for 7thMay 1908 where an article fills in some much-needed details:
Dr. Todd, Callander, was killed on Wednesday while Mr. P. T. Smith, at present residing at the Dreadnought Hotel, Callander, was driving his motor car from Strathyre to Callandar with Mr. Todd and another occupant. The car bumped on a stone, and swerved to the side, going over the embankment of Loch Lubnaig.
All were thrown out of the car, and escaped with slight injuries, except Dr Todd, upon whom the car had fallen. It was seen that the doctor was seriously injured, and he died at one o’clock this morning.
A later report on the 18thJune in the same newspaper added the information that:
W. C. Gibson, road surveyor, deponed that there was no stone or any other obstruction on the road to cause the motor to turn to the side, and he thought from the position of the car that it had been travelling fast.

A verdict of accident, caused by careless driving, was returned at the hearing.

Grave of Dr. James Todd
The only matter that has not been cleared up satisfactorily therefore is that of the snow. Both Brealy’s and Shandler’s accounts refer to the appalling weather, yet it is not mentioned in the newspaper accounts, which even go so far as to say that there was no sign of there being anything adverse in the road – a fact that does not suggest an area greatly covered with snow! It is almost tempting, especially given the time of year that events occurred, to suspect a certain amount of over-embellishment taking place.
It turns out however that there was indeed freak wintry weather across England and Scotland in April of that year. While it is difficult to determine for certain if the snow storms and freezing temperatures that buffeted the country extended into May itself, the memory of the bad weather could easily have combined with the fate of the doctor in local imaginations. 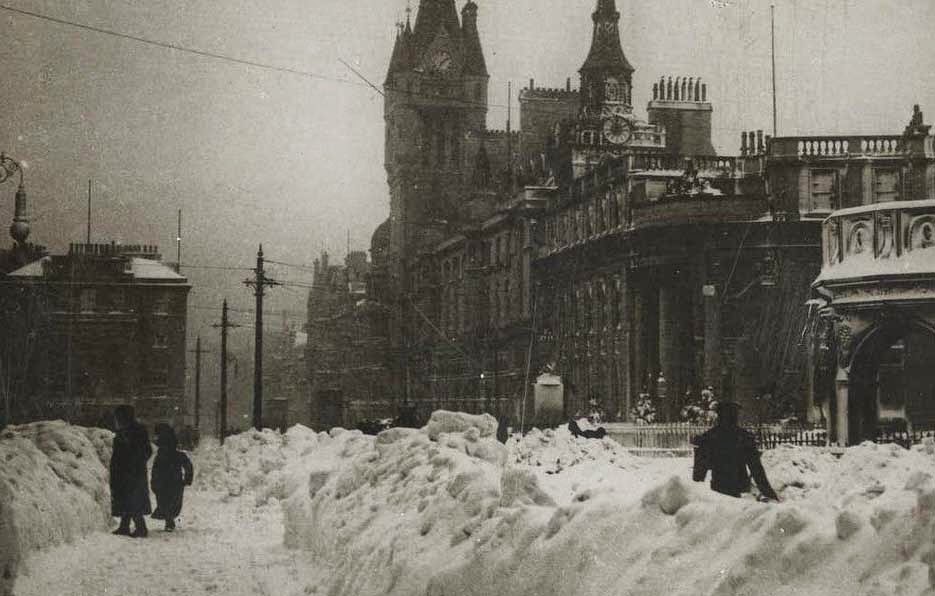 Snowfall in Aberdeen, Scotland, 1908
Just under seven miles away from Callander, the corner on the A84 where Dr. Todd met his fate is still an accident hotspot today. Fittingly, the legend of the doctor is still going strong in various versions, such as the following warning to modern day drivers:
“The road was much improved during the 1980s, but still has the occasional hefty bend to keep the driver awake – such as the right-hander near the head of the loch – locally known as “Doctor’s Corner” after a local doctor who didn’t make it one night on an emergency call!”