Skip to content
Gyre Carline – a Scots term, from the Norse for Old Woman – was a force to be reckoned with. In some accounts a giantess, others a witch or hag, she inspired terror in the hearts of those who heard tales of her exploits, and perhaps with good reason.
One such story involves the smiting of Lochar Moss. During a gathering of fellow witches, several of Gyre Carline’s horses were swept away by a high tide as they went for a ride during a gathering on Locharbrigg Hill. The area below, Lochar Moss, was then open sea, but, after a wave of Gyre Carline’s staff, it turned at once into a vast, boggy mass. 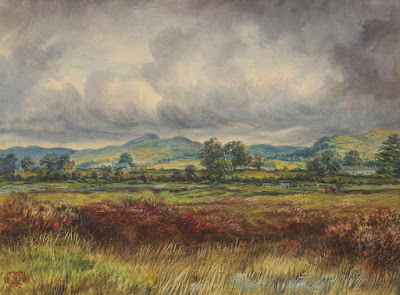 Lochar Moss
Locharbrigg Hill, about four miles from Dumfries, Scotland, had a long association with witches. It was especially known for the meetings held there on Walpurgis Night, 30th April, where witches and warlocks gathered for dancing and revels. On these occasions, Gyre Carline was second in importance only to Satan himself, presiding over the initiation of new members and the following elaborate celebrations.
Parallels can be drawn between Gyre Carline’s rides with her followers and the Hallowmass Ride or Wild Hunt. Faeries, witches or the dead were said to ride through the sky, the accompanying wind often drawing up those who got in its path.
A rhyme supposedly sung by the followers of Gyre Carline during their rides is translated as follows:
“When the grey owl has three times hooted,
When the grinning cat has three times mewed,
When the fox has yowled three times in the wood,
At the red moon cowering behind the cloud;
When the stars have crept deep in the mist,
Lest spells had picked them out of the air,
Up horses all, without more ado,
Ride, ride, for Locherbrigg hill! 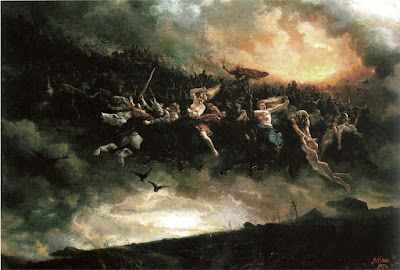 The Wild Hunt – by Peter Nicolai Arbo
There are many references to Gyre Carline. According to Sir Walter Scot, the Gyre Carline was identified also with the Fairy Queen or Mother Witch:
“A gigantic and malignant female, the Hecate of this mythology, who rode on the storm and marshalled the rambling host of wanderers under her grim banner. This hag (in all respects the reverse of the Mab or Titania of the Celtic creed) was called Nicneven in that later system which blended the faith of the Celts and of the Goths on this subject.”
In Remains of Nithsdale and Galloway Song, R. Cromek describes Gyre Carline thus:
“… reckoned the mother of glamour, and near a-kin to Satan himself. She is believed to preside over the ‘Hallowmass Rades;’ and mothers frequently frighten their children by threatening to give them to M’Neven, or the Gyre Carline. She is described as wearing a long grey mantle, and carrying a wand, which, like the miraculous rod of Moses, could convert water into rocks, and sea into solid land. 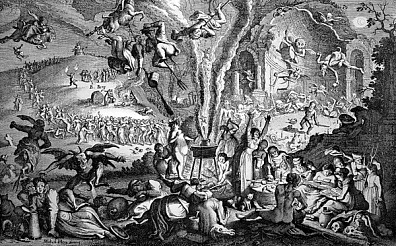 Between two and three miles wide, the area of land that Gyre Carline supposedly struck is still known as Lochar Moss today. For centuries it fulfilled the role of a natural moat, serving as protection for Dumfries. The peat there was also cut and dried and used to provide fuel. There were plans to drain the area as early as 1754, when the engineer John Smeaton’s suggestions were drawn up but not carried out, and it was finally drained in the 19th century. The transformation of the land by Gyre Carline may also have at least a little basis in fact: archaeological finds, including the remains of boats, were discovered during the draining, suggesting that the area had once indeed been open water.