Skip to content
There is a curious sight that can still be seen today in the Channel Islands: the legendary  witches’ seat or stone. 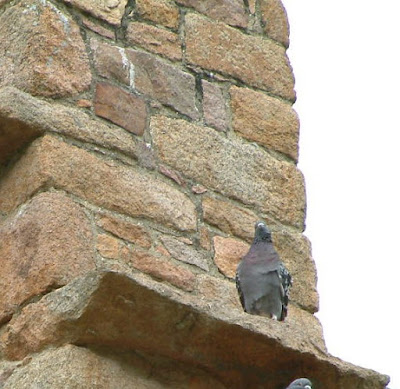 In evidence in both Jersey and Guernsey, these small plinths or ledges were, it was said, built for a very important purpose. Witches, travelling across the island on their brooms, were often in need of a place to stop and catch their breath, and more than capable of punishing a householder if they did not provide a place for him or her to rest. Worse, if there was no ledge or “seat”, then the witch might come into the house itself to seek refuge, and if you were really unlucky, might choose never to leave! 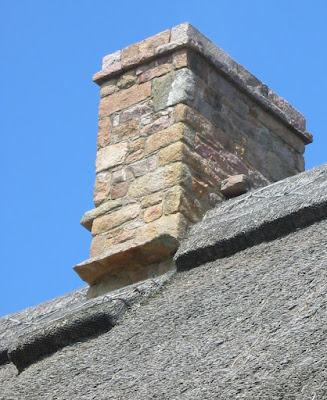 Witches’ Seat on a traditional thatched roof
Witches would meet on a Friday night at various locations across the islands, with dancing and revelling lasting well into the night. The witches might, understandably, grown tired on the way home, and thus the “seats” were necessary to keep the tired witches from seeking revenge on those who did not think of their comfort. There is also a variation on this theme in the fireplace “corbels”. These stones stuck out through the wall and provided a ledge outside the building, and thus another useful place for a witch to stop. 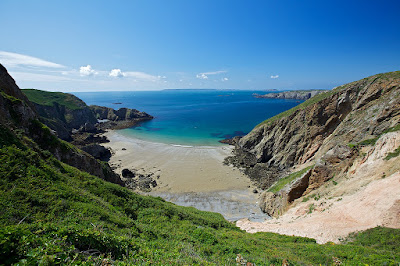 Grande Greve, Sark
Known as a popular meeting place for witches.
The real purpose of these ledges was somewhat less fantastical. Rain water running down each side of the chimney would, over time, do damage to the thatch, and so the “seats” served the purpose of providing the necessary protection against this eventuality. It is unclear which came first; the belief in the witches’ resting place (for which the ledges were them appropriated), or whether the architectural design led to the creation of the legend.
In the 18th century, tile was introduced to replace the earlier thatch, which in turn were replaced by slates as the material of choice as time went on. Interestingly, as these new roofs were thinner than the older thatched ones, the stone ledges stuck out much more noticeably in the new designs. 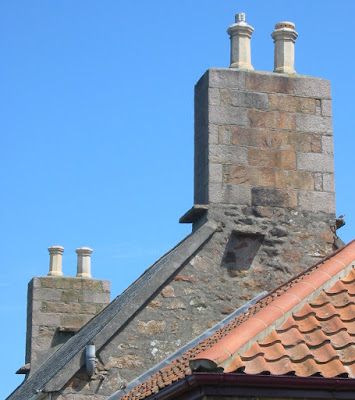 “Seat” on a lead roof.
A newspaper of 1971 showed the belief was still going strong:
“Those stone blocks sticking out of the walls of some of the old houses in Guernsey are not evidence of faulty workmanship – they’re witches seats. The old folk on this British Channel Island off the coast of France knew that witches got tired on their flights around the island, and needed somewhere to rest.” 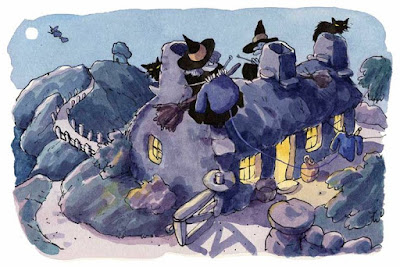 Witches making good use of the seats!
So ingrained is the belief in fact, that even today, some newly built houses have witches’ stones built into their design as a matter of course, despite never having been thatched! 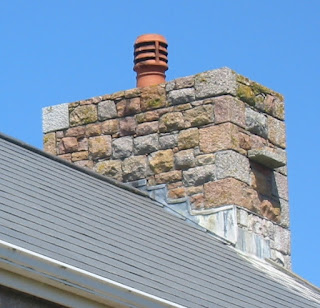 “Seat” on a modern roof.

1 thought on “Where’s a Witch to Rest? Chimney Stacks and Witches’ Seats.”