Skip to content
As most readers of this blog know, we had a new addition to the family back in March. It was an eventful occassion in many ways, and along with a long-expected diagnosis of autism for our now middle-child, and the rather less expected discovery that Tiny Baby had a tongue tie that needed snipping, all in all, 2017 has been an eventful, sometimes taxing, and often wonderful, year so far!
For many reasons it’s meant we’ve had to be a little more creative in meeting everyone’s needs and wants. Take plans for the summer for instance. The kids want to go on holiday. Tiny Baby hates the car. Day trips to nearby places invariably end up with something being missed out and there not being enough time to do everything we want to do.
Solution?
A mini-break to nearby Nottingham!
(And of course, being me, it was inevitable that we would find more than one folklore connection along the way…..) 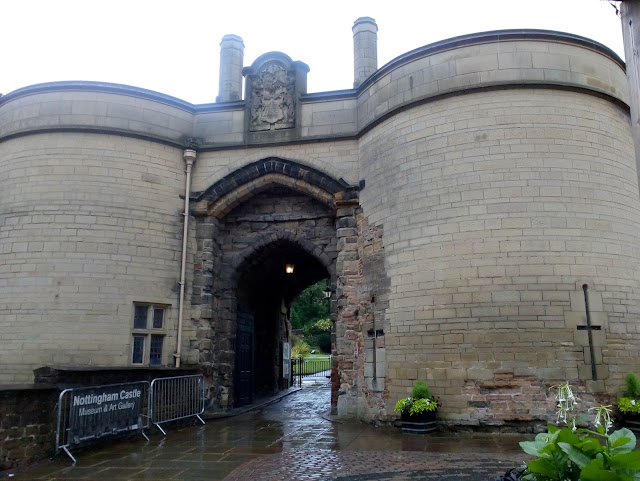 The only ‘original’ remaining section of Nottingham Castle
There’s a lot to be said for going on holiday somewhere only half an hour away from where you live. I checked into the Premier Inn with the three kids and a huge suitcase on the Sunday afternoon, and then we were off across the road to make the most of our family pass for Nottingham Castle. 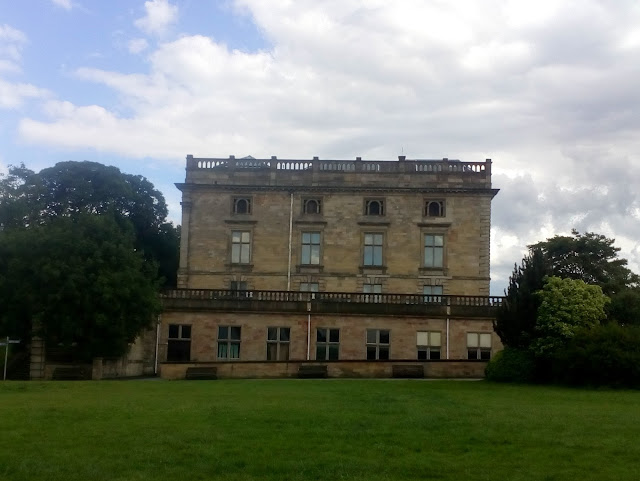 The ducal mansion, which now houses the Nottingham Castle Museum and Art Gallery 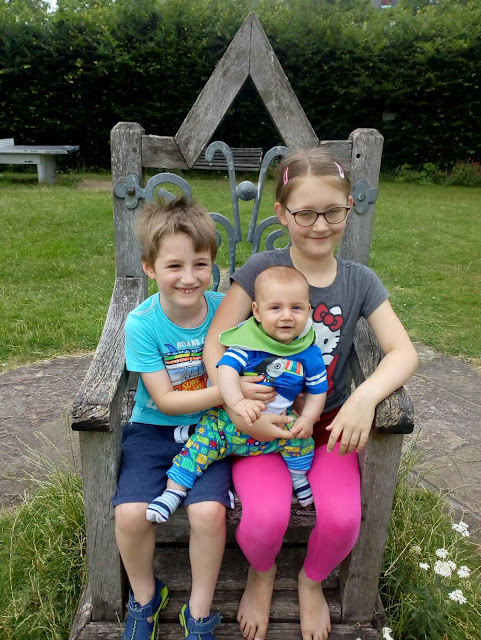 My three favourite small people!
On our way back to the hotel we made an unexpected discovery; although The Robin Hood Legacy has been running since last year, this was the first time we had passed that route from the castle! Robin Hood and Maid Marian were very friendly and welcoming, and after soaking each other in the stocks outside, the kids had a fabulous time being told of Robin’s exploits through a series of talking tableaus, finishing up with some target practice and a look through a fascinating array of Robin Hood memorabilia.
Check out The Robin Hood Legacy on Twitter at @RobinHoodMuseum 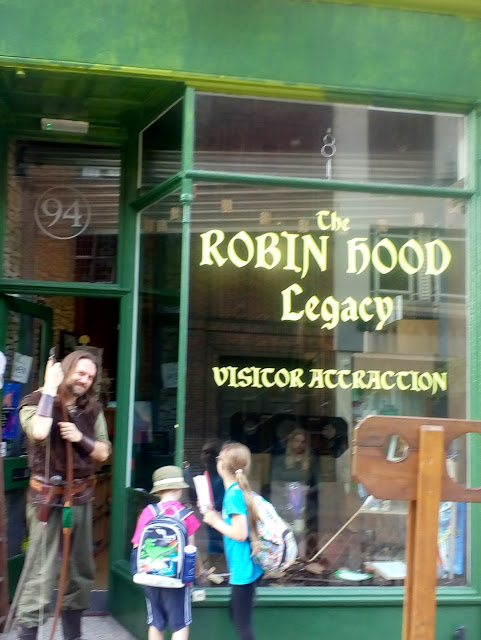 Having a chat with Robin Himself 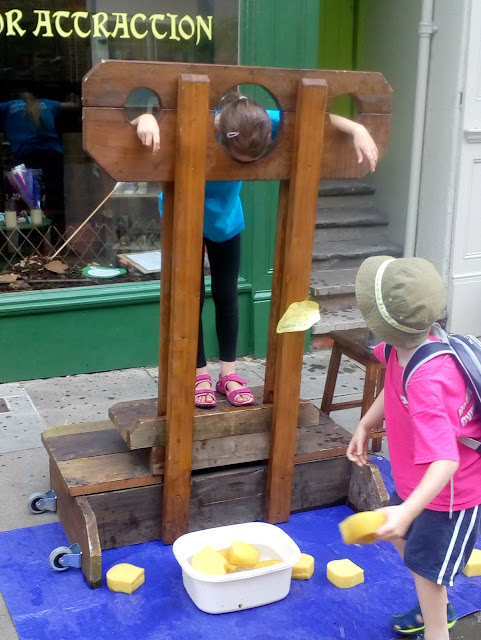 The perfect excuse to soak your sister! 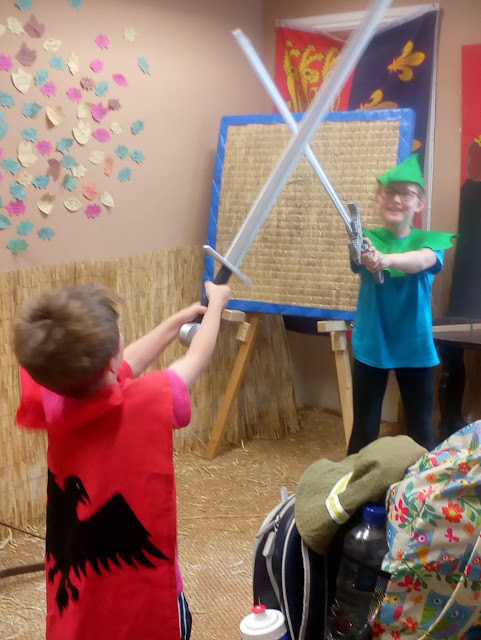 Tiny and I kept well out of the way once the swords and arrows came out! 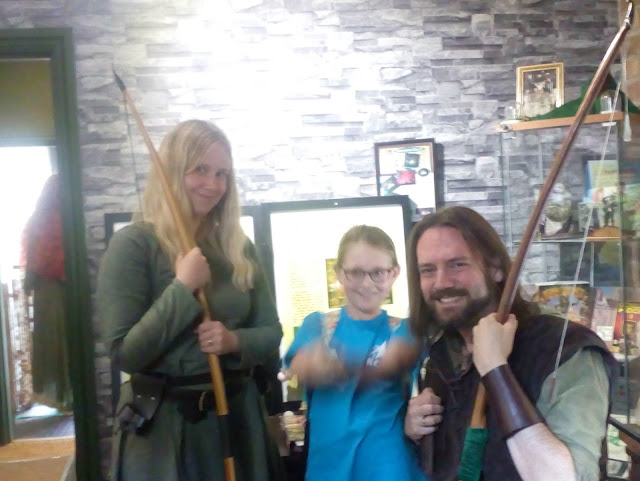 With the obvious Robin Hood connection, it is hardly surprising that we encountered the famous outlaw in several guises during our trip… 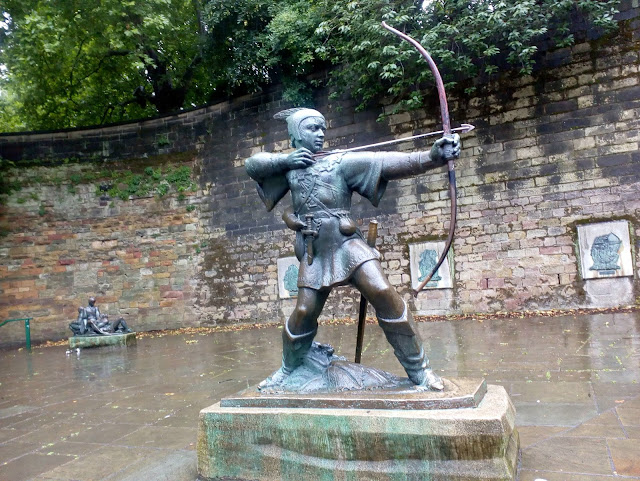 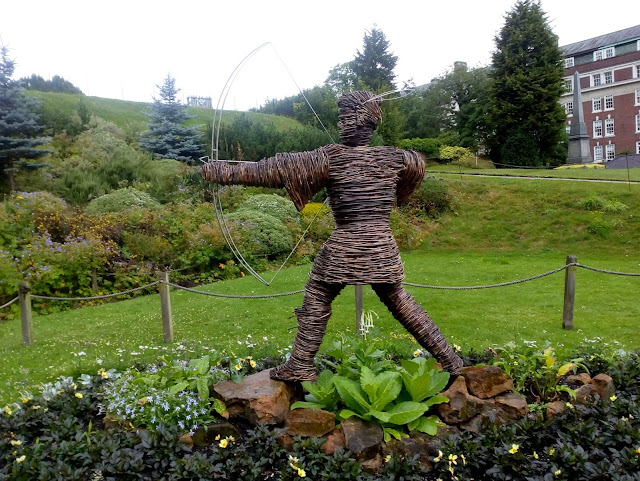 Robin in Wicker
Can’t get enough Robin Hood? Check out the following Robin-themed articles:
Ezekial Bone: Harnessing the Spirit of Robin Hood
Who Was the Real Robin Hood? A New Theory from Michael Reuel
And let me know if you have a local Robin Hood statue or image either here or on Twitter!
Moving away from legendary outlaws, we also went on the Dinosaur trail around the city to hunt down the three dinosaurs said to be lurking…. 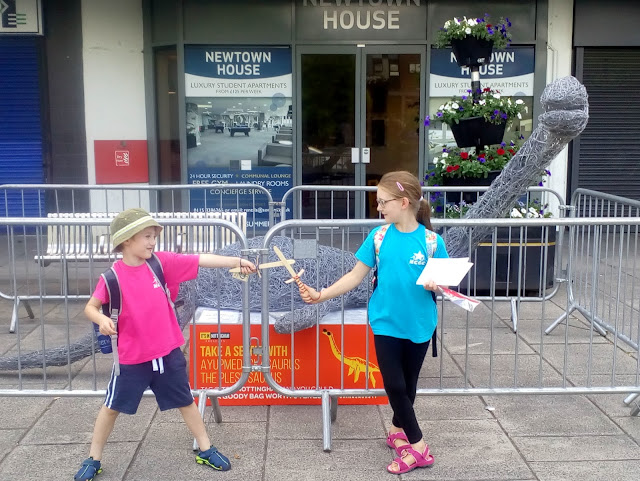 This one has the best name of the bunch – Ayupmeduckasaurus the Plesiosaurus (It’s a local thing…!) Some say the Loch Ness Monster looks rather like this prehistoric sea creature… 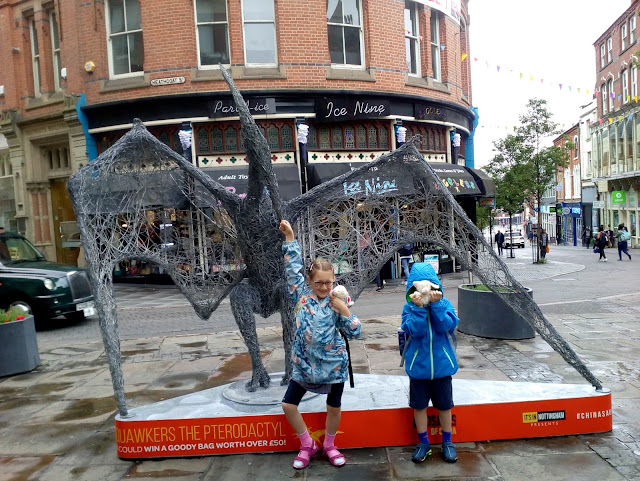 Posing with Squawkers The Pterodactyl 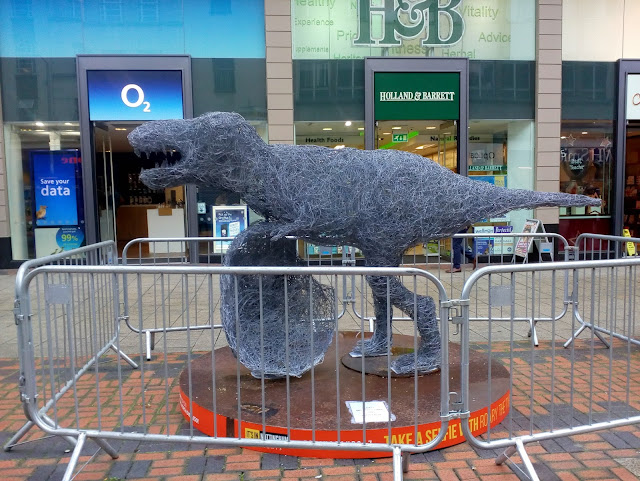 No one wanted to be in a picture with this rather terrifying specimen! 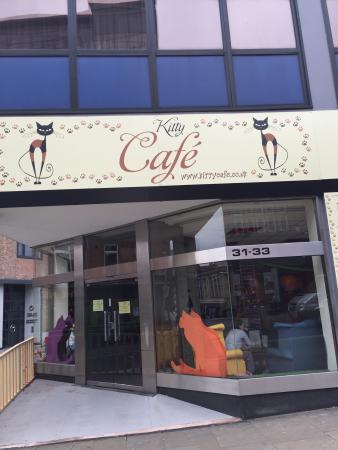 Nottingham Kitty Cafe
The kids have been asking to visit the famed Kitty Cafe every time we’ve gone past for the last year. They do say the best things come to those that wait! The cafe is home to a wide selection of cats with a variety of tastes and temperaments – we ordered drinks and very soon the visitors started coming to our table, much to the delight of the children! The cafe also operates a rehoming service, but the only cats we took home on this occasion were toy ones as a souvenir.
To find out more about the Kitty Cafe or to plan a visit, check out their website here: Kitty Cafe
Of course cats feature frequently in folklore, find some examples below:
The Curious Origins of Nursery Rhyme Cats
Do as you Would be Done By: The Fate of the Bristol Cobbler
The Black Cat as Witch’s Familiar 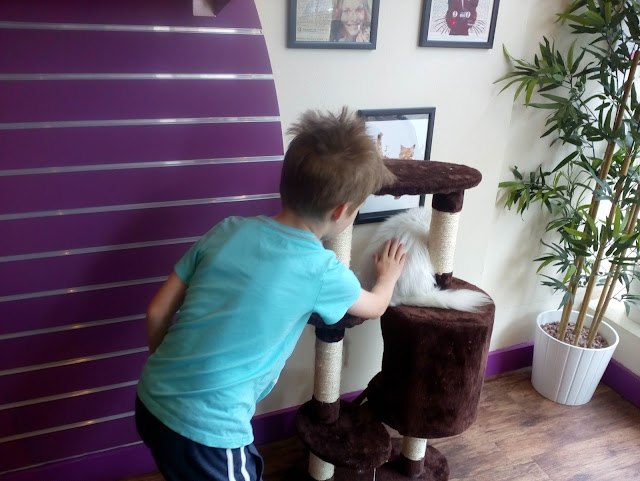 Getting brave enough to stroke one! 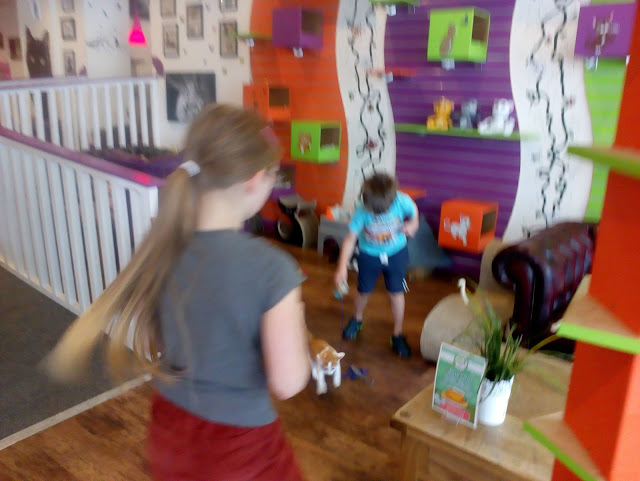 Enjoying a play with Fred (or is it George?)
On our last day we  returned to the castle again for a tour through the famous caves that run under the city. Our tour guide filled us in on the fascinating and often gruesome history of the castle and the caves, and I admit to a shiver as we passed deeper and deeper underground…
Creepy Caves: The Mystery of Mortimer’s Tunnel 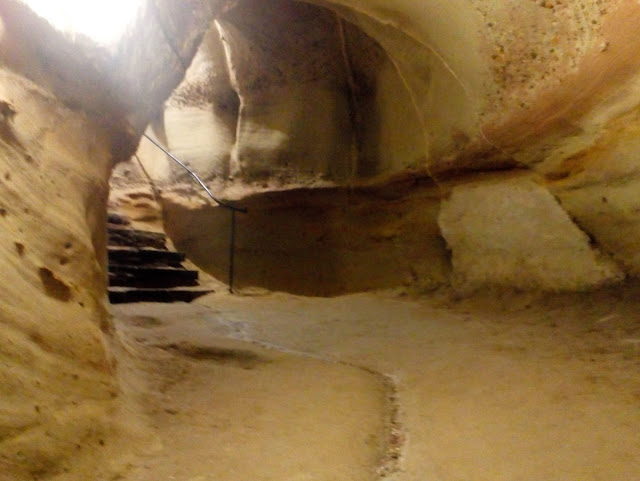 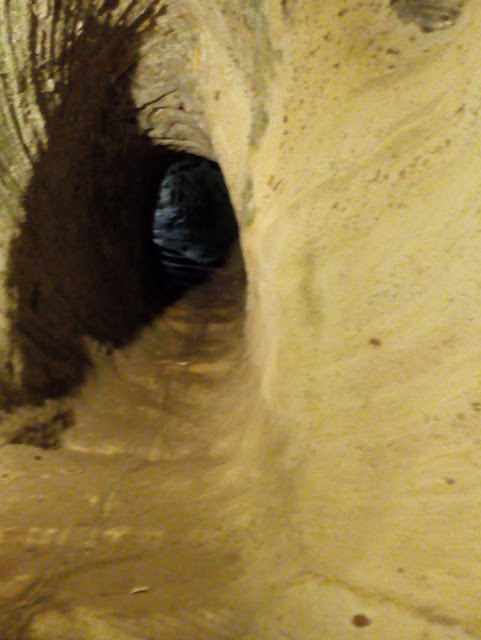 One of several tunnels with a tale attached… 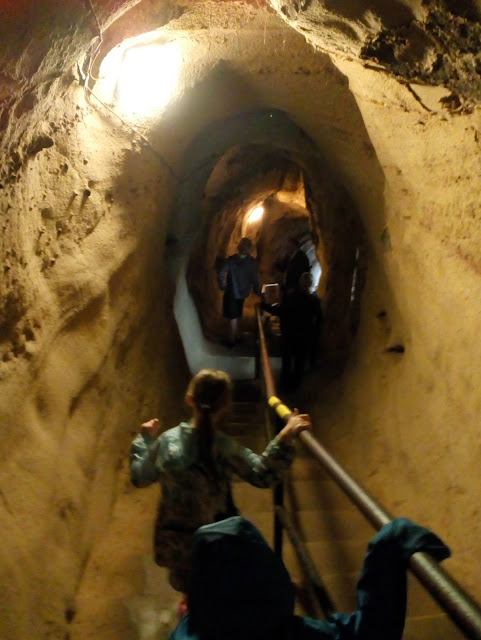 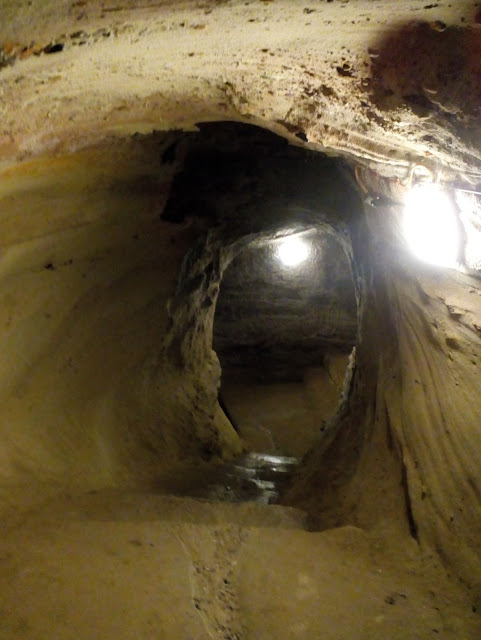 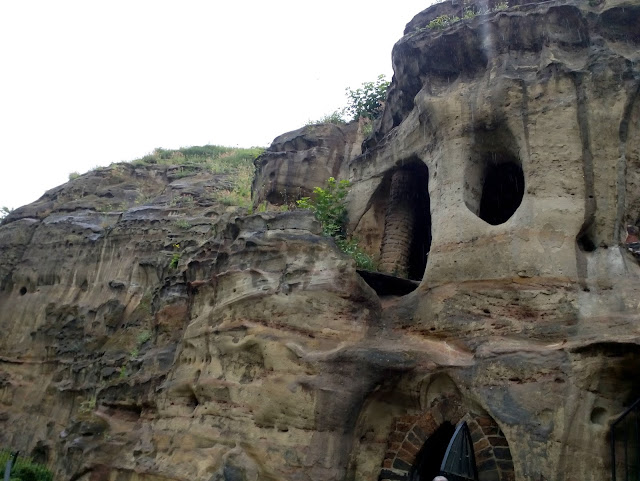 At the bottom and back in the fresh air at last! 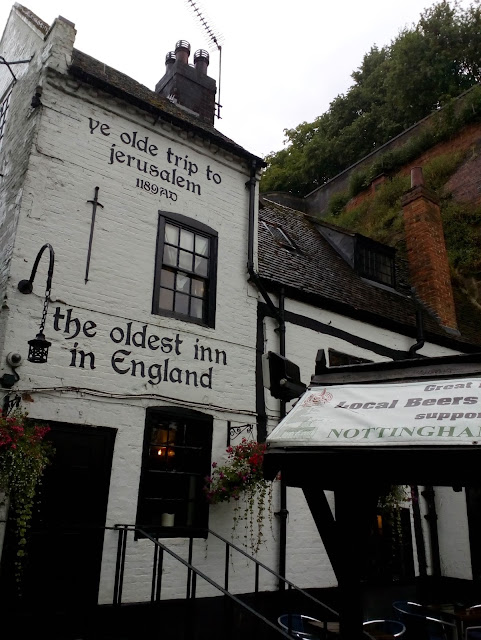 Close by the exit to the caves lies Ye Olde Trip to Jerusalem, an inn that promises to support
its claim to being the oldest inn in England
All in all we had a wonderful trip, and only scratched the surface of what the city had to offer. As I write this, the kids are already planning our next visit, and I don’t think it will be long before we’ll be heading back! 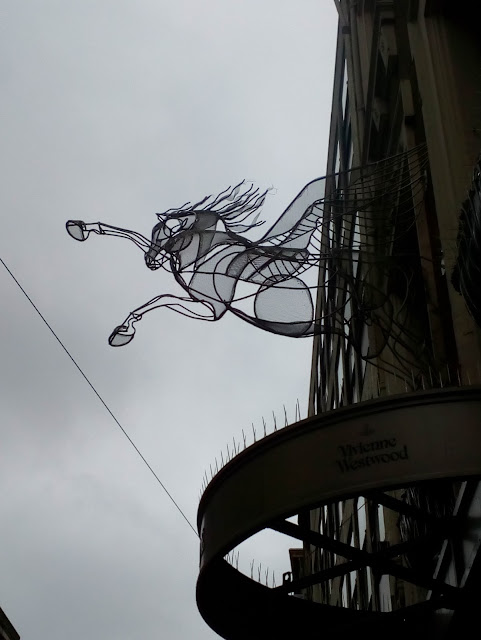 A chance find of a winged horse had us reaching for our cameras!